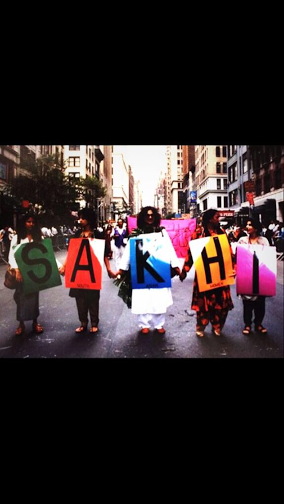 The organization Sakhi for South Asian Women, which means “woman friend,” was founded in 1989 to provide services and support for survivors of domestic violence among the South Asian communities in New York CIty.

We unite survivors, communities, and institutions to eradicate domestic violence as we work together to create strong and healthy communities. Sakhi uses an integrated approach that combines support and empowerment through service delivery, community engagement, advocacy, and policy initiatives.

While Sakhi initially worked with Indian communities during the 1990s, the reach has now spread to Paskistani, Bangladeshi and Indo-Caribbean communities.

The domestic violence training session, which I attended on Feb. 1, served as an integral way to understand the systematic barriers that organizations including Sakhi, law enforcement and social services continually need to work to break down, which in turn allows survivors of domestic violence abuse with the psychosocial support they need.

Four Sakhi staff members, including the Deputy Director Shalini Somayaji and survivor advocates from the Direct Support staff gave an overview of how survivors come to Sakhi for help.

One of the key points that came up during the training was the idea of domestic violence being an “others” problem or the idea of “model minority,” which often diminishes the experiences of South Asian immigrants who are not well educated, low-income and are often subjected to economic abuse.

Economic abuse can be defined as abusers wracking up huge credit card debts on the survivor’s cards, controlling any money the survivor makes, or using threats of deportation for those with conditional Green Cards. Often, we think only think of emotional and physical abuse, but in many of the Boroughs across New York City, such as Queens, Brooklyn and Staten Island, the number of South Asian immigrants facing economic abuse is widely rampant.

In addition, survivors come to Sakhi to understand the legal system and attain social services, such as domestic violence shelters and they also try to figure out their “life after.”

This idea of what “I will do after” is not something many survivors have thought about. Sakhi advocates explained how many survivors would say, “No one has ever asked me what my dream job is or what I want to do.”

Sakhi’s services also provide support groups for survivors once a week with two South Asian psychologists, who speak Hindi and Bengali. Often, expressing emotion can be hard for survivors to do in English and they feel more comfortable using their native tongue.

Sakhi volunteers are an integral part of the organization and can help in many ways to ensure success of the various programming, policy and advocacy issues. Volunteers at the training session came from all different backgrounds and age groups. Many were college students, family members, retirees, doctors, and women’s right advocates who had heard about Sakhi through their jobs, friends, and/or had personal experiences of domestic violence related issues.

With a firm conviction in uniting survivors, communities, and institutions to end domestic violence and create healthy communities, Sakhi has provided its services in the NYC area for 25 years. The organization is a beacon of hope for survivors in the South Asian communities who need a “friend.”

Sakhi is always looking for new ways to expand and reach communities including homosexuals and transgenders, who often carry their own societal stigmas among the South Asian community.

Even though  Shalini Somayaji said, “You can’t do it all at once,” Sakhi is making strides to become more inclusive of those populations who are often misrepresented in domestic violence issues, such as men of color and the LGBTQ communities.

Every year, the Sakhi helpline serves more than 2,000 survivors of domestic abuse and over 600 are served in some capacity through Sakhi programs.

How can you help? To volunteer for Sakhi NYC, email volunteer@sakhi.org and indicate which training date you would like to attend. The next two training sessions are scheduled for: May 3 and Aug. 2.

If you or anyone you know is involved in an unhealthy relationship or they show signs of emotional, physical, or economic abuse, please contact the Sakhi NYC helpline at 1-212-868-6741 from Monday-Friday 10 a.m. – 6 p.m. or email contactus@sakhi.org. For more information about Sakhi’s services or for a list of their upcoming events visit, www.sakhi.org and follow them on Twitter.