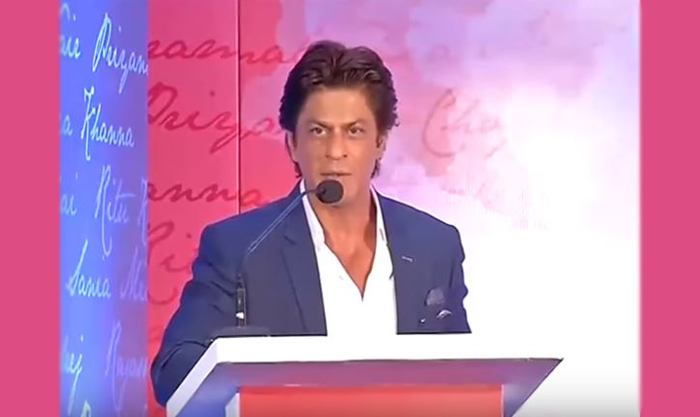 What do Shah Rukh Khan and Zayn Malik have in common? Other than being international superstars and breaking the Internet with their selfie at the Asian Awards in London last year, the two have been known for their positive remarks about women.

This kid is so cool. May Allah bless him. Dinner time at the Asian Awards. pic.twitter.com/l0gV12n0kv

On July 21, Khan attended author Gunjan Jain’s book launch for “She Walks, She Leads,” where he spoke about the impact women have had on his life.

In fact, he has been quoted saying:

”They [women] have helped me achieve 100 percent of what I am today. I wouldn’t be half a man without these women. I owe my life to them.”

Although Khan is in the process of writing an autobiography, the biggest surprise of the event was when Khan ended his remarks with a poem he wrote based on his interactions with Malik.

“There was an amazing quote about girls by Zayn Malik that I read. I’d really tried to be with it because of my daughter. So when I met him in London, inspired by his thoughts and his writing, I penned a poem for tonight or at least some rhyming lines that I felt about girls all around the world. So his quote was more or less this, I’ve tried to rhyme it. I hope it works.”

Read the poem,”I am Beautiful Because I Fight Like A Girl!’ here:

Watch Khan’s recitation of the poem below:

From being an incredible actor to a touching poet, is there anything SRK can’t do?! We love this multitalented man, and can’t wait to see him pave the path for women’s rights in India and around the world!