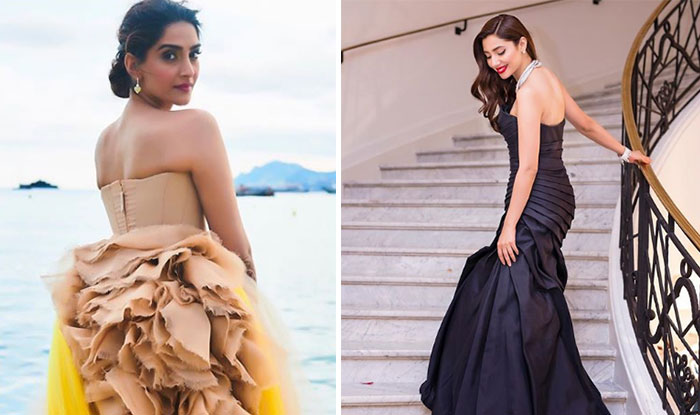 The two-week festivities at the Cannes Film Festival have wrapped up last week, and so have our thoughts about the fashion statements on the red carpet. The second half of the festival honored the newlywed Sonam Kapoor and Mahira Khan.

It wasn’t enough that #SonamKiShaddi flooded our feeds and lives with Kapoor’s wedding festivities, that she walked the Cannes as the most beautiful Bollywood princess. So, here’s starting our list of the two Bollywood divas with the eternal beauty that is the “Veere Di Wedding” star.

Wearing an embellished ball gown skirt and crop top from Ralph & Russo, this look was mimicking a tradition lehenga. The blouse was a fashion statement in itself with a cape-like sleeve on one arm and a sheer sleeve on the other. Personally, I feel like this should’ve been part of her wedding wardrobe — classy, ethereal and all sorts of princess vibes. She brought out all her desi vibes by rocking the braid adorned with a rustic jewelry piece, flawless with a strong kohl liner, and not to mention her post-wedding mehendi.

Her second look was more reminiscent of the fashion-forward Kapoor girl we’re all accustomed; she wore a Vera Wang nude gown. With a sheer yellow train and large tethered detailing resembling a bow, the diva graced the carpet in a messy bun and edgy yellow eyes. She let the dress and makeup do the talking as she kept her jewelry simple again with yellow drop earrings. Edgy, but beautiful and over-the-top, yet subdued – everything you’d expect.

Khan, the Pakistani actress making her debut at the festival this year, wore an Alberta Ferretti strapless black gown as her first look on the red carpet. She was a classic beauty sporting a multi-layered diamond necklace, Hollywood waves and clean makeup with a bright red lip — too classic for my taste. The gathered waistline and fitted bodice were not only basic but dated.

What are your thoughts?

And that’s a wrap ladies and gentlemen. Another year at Cannes down, and for the most part, our Bollywood babes delivered with their graceful looks. Who takes the best-dressed prize home this year? We’ll leave that for you to decide! Until next year!

Oil Me Up, Please! The Natural Oils Your Body Needs Right Now