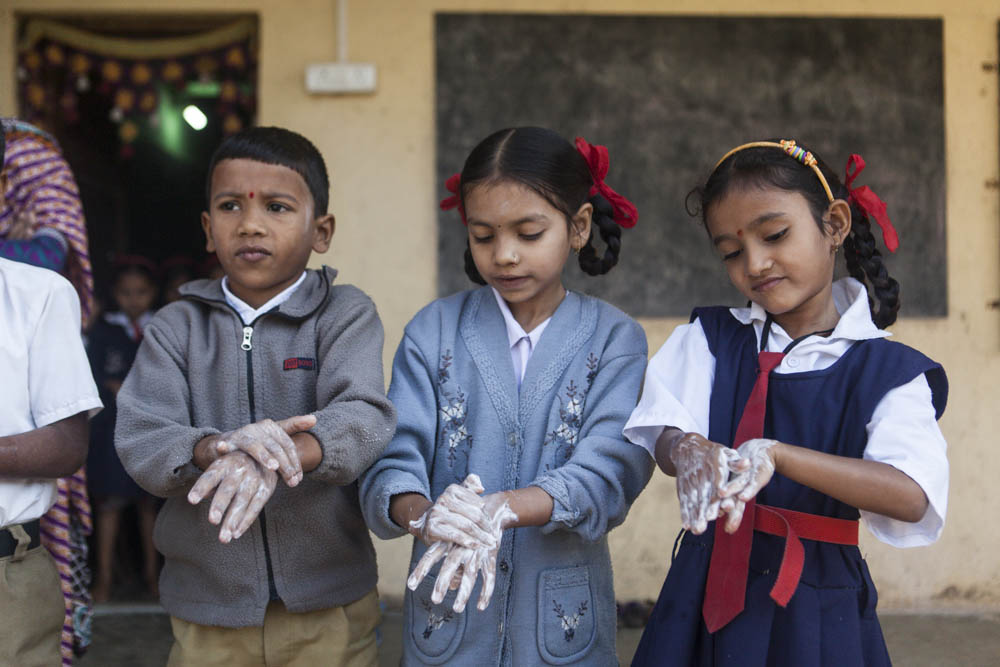 While staying at a hotel, many of us love to try (and sometimes stock up on) all the mini soaps, shampoos, and lotions provided. Often, the room is replenished with new toiletries each day. (Ah, it’s the little things in life!) But do we ever wonder what happens to the endless, opened bars of soap that we leave behind? Are they simply trashed? I myself am guilty of not even entertaining this thought. Thankfully, the not-for-profit enterprise Sundara Fund has realized how to rescue and recycle thousands of kilograms of soap waste, with the ultimate goal of reducing preventable hygiene-related deaths and disease among underprivileged communities. (Ah, the little—but big—things in life!)

The impetus for launching Sundara was born back in 2013 when founder Erin Zaikis was working with organizations and schools fighting child trafficking in rural northern Thailand, on the border of Myanmar. During one school visit, she watched as teenage children entered and left the restroom without washing their hands. Making the several-hour trek to the closest store that sold soap, she bought roughly 150 bars costing $30. “Cigarettes were much more expensive, but cigarettes were bought by almost everyone in the community…The problem did not lie in the cost of soap, but rather the education,” Zaikis says. While conducting an impromptu hand-washing workshop at a school one day, she “watched in horror” as one child tried to bite the soap, some scratching it with their nails, and yet others smacking their faces with it—unsure of what to do. Zaikis says, “Here I was, meeting children who had lived their whole lives without something I took for granted every single day of mine. Reeling from the inequality of this situation and feeling like no one else was putting attention on it, I decided I had to help.”

Upon her return to the United States, Zaikis’ research highlighted the persistence of this problem across many developing countries. According to the World Health Organization, over 2 million children each year are dying of preventable diseases, like pneumonia and diarrhea, which can simply be prevented by regular hand-washing with a bar of soap. However, the world’s poorest can neither afford soap, though it is cheaper than any vaccine on the market, nor are they aware of the benefits of hand-washing. Thus, Sundara, meaning “beautiful” in Sanskrit, was imagined with the mission to “reduce preventable hygiene-related deaths by creating sustainable soap recycling programs for underserved populations around the world.”

Each year, the hospitality industry throws away billions of bars of gently used soap into landfills. Sundara’s unique approach involves partnering with hotels to take these bars before they are trashed and sanitize them so that they are pathogen-free and cannot transmit further disease. Basically, Zaikis explains, a vegetable peeler is used to remove the soap’s outer layer of debris, the soap bar is then grated with a cheese grater and cleaned in water mixed with a chemical solution made by Diversey/Sealed Air, and lastly is placed in a soap press made by the Full Belly Project. Twisted and turned, the press produces a fresh new bar that is packaged for redistribution. Through this whole process, which only lasts seven minutes and does not require electricity, Sundara has saved 6,900 kilograms of soap and made 40,000 new bars of soap.

In an effort to address and solve this kind of hygiene inequality, Sundara has spread its operations to Mumbai, India; Kampala, Uganda; and Yangon, Bago, and Bagan in Myanmar. An estimated 70 million people in India, alone, do not have access to soap. Sundara’s Mumbai operation launched in 2014, for example, is comprised of a field director, program coordinator, three full-time soap recycling staff, and dozens of part-time teachers in Kalwa and Shilonda, who are trained in hygiene lessons. The team’s sustainable movement is centered around providing leadership training to local community members to give dignified jobs to underprivileged women and focus on intensive, ground-up hygiene education. By listening to and empowering community hygiene ambassadors, Sundara is able to create culturally-specific and effective hygiene models. As written on Sundara’s website, “Education is a lot more powerful if it comes from someone who looks like you, speaks your language, and has had shared experiences.”

Upon receiving the sanitized bars of soap, the female hygiene ambassadors — trained teachers and caretakers like mothers and grandmothers — conduct free hygiene demonstrations under the supervision of doctors and nurses to teach adults and children alike about the uses of soap and its importance. Across Sundara’s operations, 1,842 classroom lessons have been taught, and over 6,000 lives have been impacted. Like with any venture, however, monitoring and evaluating programmatic success is of great necessity. Sundara does this not only by measuring the amount of soap waste saved from landfills and the amount of new bars made, but also by working with local medical experts to measure the reported rates of diarrhea, pneumonia, skin rashes, and eye infections in its areas of reach pre-and post-organizational involvement. In Mumbai, alone, Sundara has so far distributed more than 30,000 bars of soap in 30 different schools and has received overwhelming support from new schools, orphanages, and parents requesting their soap and hygiene training. Since no other formalized soap recycling organization exists in India, to Sundara’s knowledge, the team actively plans to expand to other Indian cities of great need.

“We don’t believe in handouts — we are encouraging a societal shift in every community we work in,” the Sundara team aptly states.

Sundara’s funding comes from individual donors, corporations, and soap companies that have invested in the team’s belief of reach. Partners and supporters include known names such as Hilton, Hyatt Regency, the Taj and Leela Mumbai, Athleta, LinkedIn, and Soapbox. Zaikis says, “I feel like a lot of people talk about clean water — which is great — but who is talking about hygiene education and soap? Which are, in my eyes, just as important.”

Click here to get involved in Sundara’s work and here to donate to Sundara’s cause. Five dollars buys a month of packaging materials for 200 bars of soap, ten dollars provides a month’s worth of soap recycling supplies, twenty-five dollars gives an entire school a month-long hygiene workshop, and one-hundred-and-thirty dollars pays for a month of employment per hygiene ambassador.