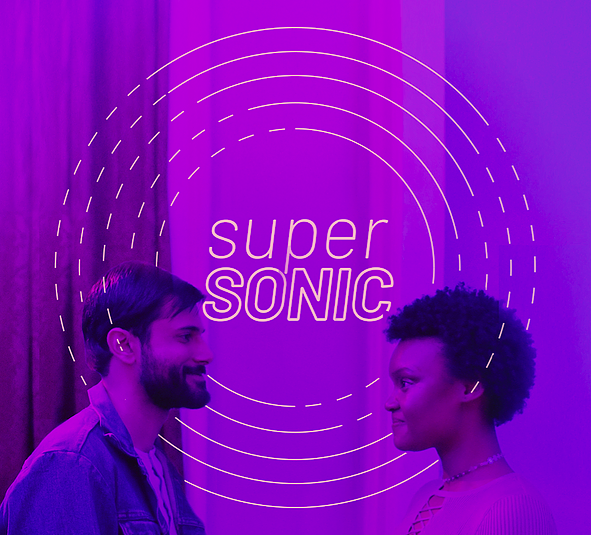 Presented by Toyota, the Big Apple welcomed its newest South Asian film festival, New York City South Asian Film Festival (NYC SAFF). Founded by veteran festival director Jitin Hingorani, the festival’s mission is to showcase premieres of features, documentaries and short films curated to engage, educate and inspire the masses, ranging from Baby Boomers to Generation Z. One of the 22 films featured in mid-November was the short “Super Sonic,” written, directed and featuring Saleem Nasir Gondal, tells the story of a young South Asian who is hard of hearing.

Art in all forms—film, music, dance—often comes from a personal place, guided by our experiences and values; and the product, a representation of what we hope to see embodied in society.

“Like the lead character Wahid in ‘Super Sonic,’ I’ve worn hearing aids ever since I was a child,” Gondal said. “Growing up, I resented going to the audiologist, as each visit was a reminder that my hearing loss was not going away. It was only after decades of updates in hearing aid technology, speech therapy and the support of my friends and family that I started to embrace my hearing loss as part of who I am. The more comfortable I felt with my hearing aids, the more comfortable I felt sharing my experience through film.“

“Super Sonic” follows the main character, Wahid, who is a hard-of-hearing South Asian Muslim as he navigates the dating scene in chaotic New York City. Through the use of unique sound design the audience is privy to the many challenges that those with hearing disabilities face as Wahid engages in conversation in traditionally loud settings, like parties and busy restaurants but “Super Sonic” doesn’t focus on the challenges alone. This short film evokes emotion surrounding the blossoming love between Wahid and his love interest, Samar, through the use of music and choreography.

As described on the website, “Super Sonic” truly epitomizes “a probing and heartfelt account of a hard of hearing an individual who finds love on the dance floor. An ode to the power of body language and empathy when words fail us.”

We, at Brown Girl Magazine, had the opportunity to speak with film writer, director and actor, Gondal. He spoke to us about his inspiration behind making the film, the challenges and why disability advocacy matters to him. Saleem, a graduate of New York University’s Tisch School of Arts, wanted to share the story because “even the few stories out there about disability rarely center POC narratives.”

“Stories about hard of hearing people are hard to find—stories by hard of hearing filmmakers are even rarer. That kind of absence of representation in my life propelled me to dig in deep to figure out how to do this story justice. I wanted this film to immerse the audience into the character’s hearing loss through sound design and highlight how essential empathy and body language are in communicating when words fail us.

As a hard of hearing person who loves films, seeing movies on the big screen is often an incomplete experience. I love being immersed by a film when I’m at the theater, but I often struggle to fully hear the dialogue. There are unfortunately very few options for audiences to watch films in the cinema with captions, so most hard of hearing folks have to wait until movies are available on streaming or DVD to understand the full story through the captions. When it came time to get ‘Super Sonic’ ready for festivals, I made sure that the film would always be shown with captions. That way no matter where it is screened, the film is accessible to the hard of hearing audience first and foremost.”

[Read Related: NYC SAFF: From East to West, 22 of the Best Subcontinent and Diaspora Films Screened in One Weekend]

Navigating a path less travelled is rarely easy. Gondal shared some of the challenges of creating a film that immerses the audience in the personal experience of a hard of hearing individual coupled with a POC point of view; the primary being that he is one of the first to tell this kind of story using his own experiences.

“There weren’t too many reference points for other filmmakers who explore their disability onscreen. While there have been some advancements for disabled creators like Ryan O’Connell of Special or Jennifer Brea of the documentary Unrest, most representation about disability is told from able-bodied creators, few of whom approach their films in a way that’s true to the experience. There are too many films out there with able-bodied actors playing disabled characters who either ‘overcome’ their disability or are painted as victims. So one of the biggest challenges of Super Sonic was figuring out how to highlight that Wahid’s struggle is learning the difference between hearing and listening. That way Wahid is overcoming his inability to be present, a universal struggle that can be changed, versus his hearing loss, which will always be a part of him.

I wanted to focus on my own story and be truthful to my experience, which is only one of many perspectives of hearing loss. Being visible in this film as a person of color with hearing loss means a lot to me. Hopefully Super Sonic can be a reference point that inspires others in the hard of hearing community to tell their stories as well.“

Creating a film that utilizes sound in such a unique way was a huge undertaking but it also provided Gondal with the opportunity to ensure that underrepresented populations were front and center for once.

Representation of all kinds has become essential in film today. It’s something we, as a society, and particularly South Asian Americans, are constantly striving for. Gondal wanted to ensure that the true experiences of disabled individuals was adequately portrayed, giving a voice to those not often heard in this space.

That’s why I feel it’s essential to have the disabled community behind the camera. Because while casting a disabled actor for the role is essential for representing the community, it can’t go all the way if the creators do not empathize with the experience of the characters they are depicting.

That was part of the reason why I cast myself in ‘Super Sonic.’ I don’t know if I have ever seen a film about hearing loss both directed and performed by artists with that perspective. I hope that the release of ‘Super Sonic’ leads to more folks in the hearing loss community telling their stories as well.”

Whether he realizes it or not, Gondal has become a powerful disability advocate. “Super Sonic” breaks barriers by centering a POC individual with a disability and gives future creatives something tangible to reflect on. We asked Gondal what it means to him to be a disability advocate and he humbly shared that this film is merely one voice of the many that exist.

“This film only looks at one voice in the hard of hearing community. There are so many other unheard stories out there in the hard of hearing community, and I don’t expect to speak for everyone. I have been privileged in many other ways that have allowed me to make this film, so it’s important to me that the success of this film opens the door for others. The world we live in was not built to be accessible for all. There is a huge intersection between racial, transgender and disability justice, and it’s crucial to think about how what one community needs is linked to another community’s struggle.

In making this film, I wanted to be conscious of how this film could join in dialogue with the folks who are doing the work to dismantle the barriers of the world we live in.”

When asked what advice he would give to young South Asian creatives looking to follow in his footsteps he spoke about having empathy for those of different backgrounds than ourselves first and foremost; as well as, “making space, not taking space.”

“As South Asians, we tend to grow up in environments limited to our identities. As a creative, you have an opportunity to build community in the ways your parents didn’t. You don’t have to live by the divides of national borders, gender binaries, caste or religion. This is not easy and I always have doubts about whether I am doing this right. But we have an opportunity to make our stories bigger than ourselves. All it takes is having the courage to reach outside of your comfort zone.”

“Super Sonic” has been selected for several film festivals and recently premiered at the New York City South Asian Film Festival on November 16th. Follow the film’s Instagram and website for more updates on upcoming screenings.