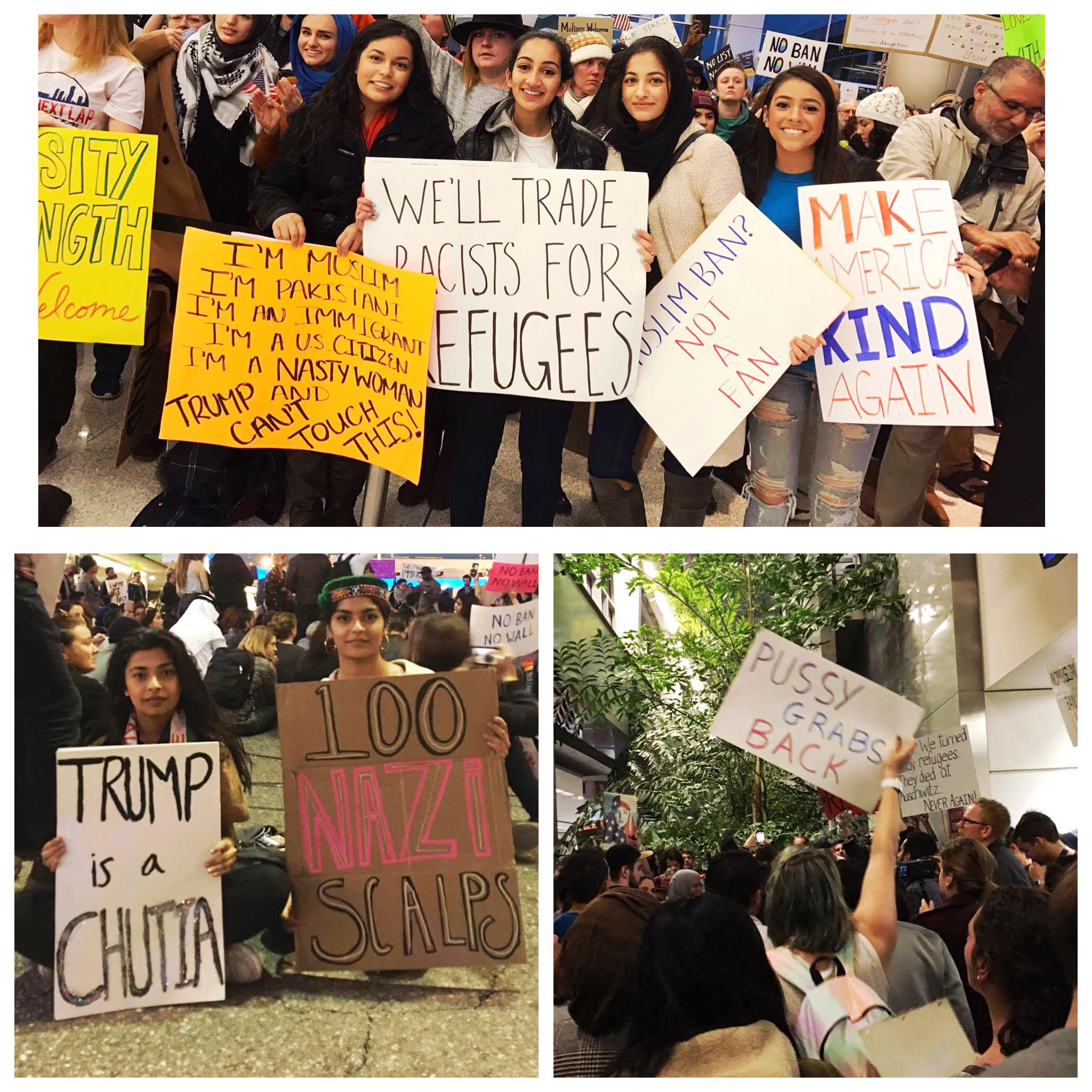 Over the weekend, President Donald Trump kept one of his (insane) promises. He signed an executive order banning refugees from seven predominantly Islamic countries from entering the U.S., turning away thousands of people fleeing war-torn parts of the Middle East. The ban comes at the close of Trump’s first week in office and amidst erupting protests and rallies across the country including the epic Women’s March. Airports across the country including John F. Kennedy International Airport was the site of a major rally, with New Yorkers gathering at Terminal 4 after news broke that 20 people were detained inside.

Tonight I met a #Muslim with his #Jewish wife at #JFK rally against #MuslimBan .
Didn’t
have to ask why he is here.
Love #trumps hate. pic.twitter.com/LVixtrxDis

The largest #MuslimBan protest is at JFK.
New Yorkers, the ones most devastated by 9/11. They are not fooled & you shouldn’t
be, either.

Similar protests popped up at airports across the country including Dallas, Los Angeles, Washington, D.C., and Seattle.

#Seattle airport is one of the main
spots of the #NoBanNoWall
protest #States #airportprotestpic.twitter.com/VMaAySN3Zc
Credits @joshtrujillo

And some people even broke out into song.

Celebrities expressed their disappointment and outrage, taking to Twitter to urge fans to donate to nonprofits like the ACLU and to boycott companies that have cashed in on the ban. Ride-sharing app Uber took a lot of heat for lowering fares to and from airports while taxi drivers were on strike. Meanwhile, their competitor Lyft donated $1M to the ACLU.

#ByeUber I can not support a
company that backs hate. Soooooooo #ByeBitch deleting my account… https://t.co/Wfvu8PGm3e

Am I going to miss @Uber ? pic.twitter.com/JrpLYZGBgl

Hey @Uber it might help the backlash if you donate $2 million to
the @ACLU.

Actor Kal Penn (“Designated Survivor”) crowdsourced over $300,000 supporting Syrian Refugees in the name of an Internet troll that told him he “doesn’t belong in this country.”

To the dude who said I
don’t belong in America, I started a fundraising page for Syrian Refugees in your name. https://t.co/NOR5P48fBi pic.twitter.com/jtJOsK9GrU

Riz Ahmed (“The Night Of”) has also been raising money for refugees, hoping to “fight fear with
love.”

Since the election in November and the inauguration last week, many Trump supporters have begun expressing their regret in voting for him (there is even an entire Twitter account compiling their condolences to our country). But it’s important to note that Trump’s tune hasn’t changed — these are the values he stood for throughout the campaign trail, and users on Twitter have not been shy to call those voters out.

Seeing some sentiment
“I voted for Trump but don’t agree with this.” This is who he is. This is what he
said he’d do. This is on you.

Remember those
3rd-party voters who were like, “Maybe things have to get really bad for people to wake
up.” That was an awesome plan, huh?

Late Saturday, the New York federal court ruled to block the immigration ban in one of the first legal wins against the Trump administration. Similar rulings were later confirmed in Washington,
Massachusetts and Virginia. Though the battle is far from over, this minor victory proves we won’t go down without a fight.

But if anyone is still considering fleeing to Canada, Prime Minister
Justin Trudeau will welcome you with open arms. <3

To those fleeing
persecution, terror & war, Canadians will welcome you, regardless of your faith. Diversity is
our strength #WelcomeToCanada