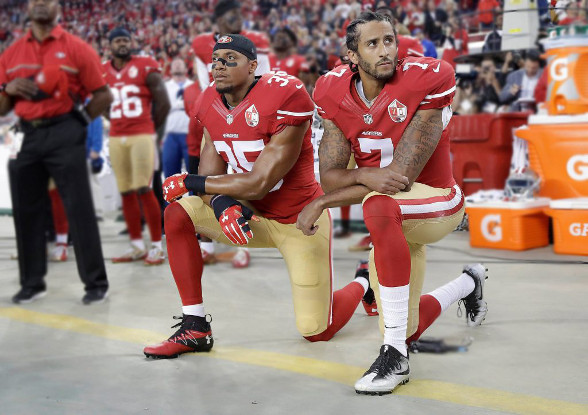 Moves of solidarity this weekend have united the NFL and NBA, and further divided the country, in the face of an ongoing peaceful protest against police brutality—one whose flames were fanned by a president who is popular (and the opposite) precisely for his unhinged, uncensored and unfiltered hot takes.

It all began just over a year ago when then-quarterback Colin Kaepernick sat during NFL preseason games to protest police brutality.

“I am not going to stand up to show pride in a flag for a country that oppresses black people and people of color,” Kaepernick said, via NFL.com. “To me, this is bigger than football and it would be selfish on my part to look the other way. There are bodies in the street and people getting paid leave and getting away with murder.”

The gesture went unnoticed for two weeks, and once it caught on, Kaepernick was joined by his teammate, Eric Reid. In an op-ed penned by Reid in The Times yesterday, he explained how the two sought to use their platform to speak out against the injustices they saw—and in contrast to the latest spin, was changed from sitting to kneeling precisely to avoid dishonoring the military and our flag.

“After hours of careful consideration, and even a visit from Nate Boyer, a retired Green Beret and former N.F.L. player, we came to the conclusion that we should kneel, rather than sit, the next day during the anthem as a peaceful protest. We chose to kneel because it’s a respectful gesture. I remember thinking our posture was like a flag flown at half-mast to mark a tragedy.

It baffles me that our protest is still being misconstrued as disrespectful to the country, flag and military personnel. We chose it because it’s exactly the opposite. It has always been my understanding that the brave men and women who fought and died for our country did so to ensure that we could live in a fair and free society, which includes the right to speak out in protest.”

On Friday night, President Donald Trump, in an all-too-familiar stream of consciousness, targeted Kaepernick and those who supported his efforts—albeit without naming them.

“Wouldn’t you love to see one of these NFL owners, when somebody disrespects our flag, to say, ‘Get that son of a bitch off the field right now. Out! He’s fired. He’s fired!'”

Part of the tragedy of this presidency is that vitriolic language and rhetoric have become so normalized that the leader of our country using language like this was hardly the issue. What has followed is 21 tweets (some as recently as this morning) issued in much the same vein. Repeatedly calling for the firing of NFL players who do not stand for the anthem, Trump has managed to reframe what was originally a protest against racism into one about patriotism—and there’s really one demographic that benefits from this: his base.

In response to Trump’s inflammatory tweets on Saturday, many NFL players started issuing statements chastising the president’s comments. It got so bad that the NFL Players’ Association president, and eventually, the league’s commissioner, chimed in. (In comparison, NASCAR owner Richard Petty issued a statement saying that anyone who doesn’t stand for the anthem “ought to be out of the country” and that anyone who didn’t would be fired).

By Sunday, game day, the Jaguars set off what became one of the most impactful displays of unity the NFL has ever had. Led by owner Shad Khan (a Trump donor), the team locked arms in solidarity as players on both sides knelt during the anthem.

Throughout the day, and through Monday night’s primetime game, owners and players alike knelt, stood, or just plain didn’t show up (including the Steelers, Seahawks, and Titans). National anthem singers even knelt.

In viewing these protests, I was emotional—the man who began this all, Kaepernick must be thrilled, I thought. After all, the message he chose to portray on and off the field was finally getting the attention it deserved. “All-American” teams like the Cowboys and Patriots also showed their solidarity—could it be that they were finally beginning to understand how much stronger we are together than apart?

However, what emerged was an even larger divide between those who knelt and those who stood, those who later apologized for taking a stance at all, and more.

As heartening as those protests were, we continue to wake up in a country where black people are being shot while their killers go free, Colin Kaepernick still doesn’t have a job, and white QBs are putting out statements of regret about not standing for military personnel that defends this country during Sunday’s protest.

A Broncos star lost an endorsement deal for kneeling, similar to Brandon Marshall last season when he began doing so as well. BuzzFeed reported that bars are refusing to play NFL games until the disrespect stops. Even the Steelers eventually backtracked on what once looked like a sign of solidarity:

“The intentions of Steelers players were to stay out of the business of making political statements by not taking the field. Unfortunately, that was interpreted as a boycott of the anthem – which was never our players’ intention,” Steelers owner Art Rooney II said in a statement.

This told me one thing–this was never about Kaepernick or police brutality. More than a year later, the only reason owners like Jerry Jones would stand up or show support is because Trump threatened their ticket sales, calling for fans to boycott the NFL until they enacted a rule about standing for the anthem. By reframing the debate, Trump not only got the kind of divisive attention he thrives on, he also managed to wipe Kaepernick’s intentions and message right off the board.

White House: If NFL debate is about police brutality, players should "protest the officers on the field," not flag https://t.co/i11kPAqxON pic.twitter.com/AWZuV3tSww

As people of color, regardless of citizenship, class, or gender, we are not seen as equal in this country. (Add those factors back in, and the divisions get worse.) Don’t let Trump, the White House, or anyone else tell you otherwise: this debate IS about race.

Let’s be clear: everyone who WASN’T taking a stance before this weekend was complicit. Those reacting to a president’s words, his attacks on their business, fan base, and ticket sales, are likely to get back to business as usual as soon as we forget.

The NBA is turning out to be a greater unification against Trump—the other targeted tweets he fired this weekend were directed to the Golden State Warriors’ leading shooter, Steph Curry. After expressing hesitation over visiting the White House as the NBA champions, Trump withdrew the invitation saying it is an honor to visit the White House and slamming Curry by name.

U bum @StephenCurry30 already said he ain't going! So therefore ain't no invite. Going to White House was a great honor until you showed up!

"It’s not about dividing. We as American people need to come together even stronger.” — @KingJames responds to @realDonaldTrump’s comments. pic.twitter.com/UHpzXpb42K

Since the pushback, and since the NFL feud caught more steam Sunday, other NBA stars have spoken out, including JJ Reddick, Spurs head coach Greg Popovich, and the Warriors’ own head coach, Steve Kerr.

A more politicized league than the NFL, the NBA seems to have more awareness of the racism and bigotry that infiltrates the game. Derrick Rose famously wore an “I can’t breathe” shirt during warm-ups, and LA Clippers’ long-time owner was stripped of his team after tapes of him using racial slurs surfaced.

And while Shad Khan set an example this weekend by showing solidarity, the #TakeAKnee protest should be a reminder to all people of color that regardless of the man sitting in the White House, and the struggles that have existed long before he had millions of Twitter followers, we must show solidarity with African-Americans, people of color, women, trans folk, Muslims and all those who are suffering injustices at the hands of oppression.

When the media stops talking about this, and when Trump finally moves on to his next Twitter tirade, remember this: black people are being murdered. Kaepernick is still unemployed. And those simply trying to ride the curtails of America’s attention span still can’t get it right:

Someone is missing… can’t qwhite put my finger on who https://t.co/F7hXVbPPAA 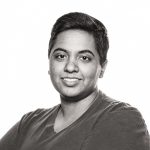 Priya Arora is a queer-identified community activist, editor, writer and Netflix enthusiast. Born and raised in California, Priya has found a home in New York City, where she currently works as a Homepage Editor at Yahoo. When she’s not working, Priya enjoys watching old school Bollywood movies, laboring over NYTimes crossword puzzles, reading books she never finishes, and eating way too much of her partner’s homemade Hyderabadi biryani.