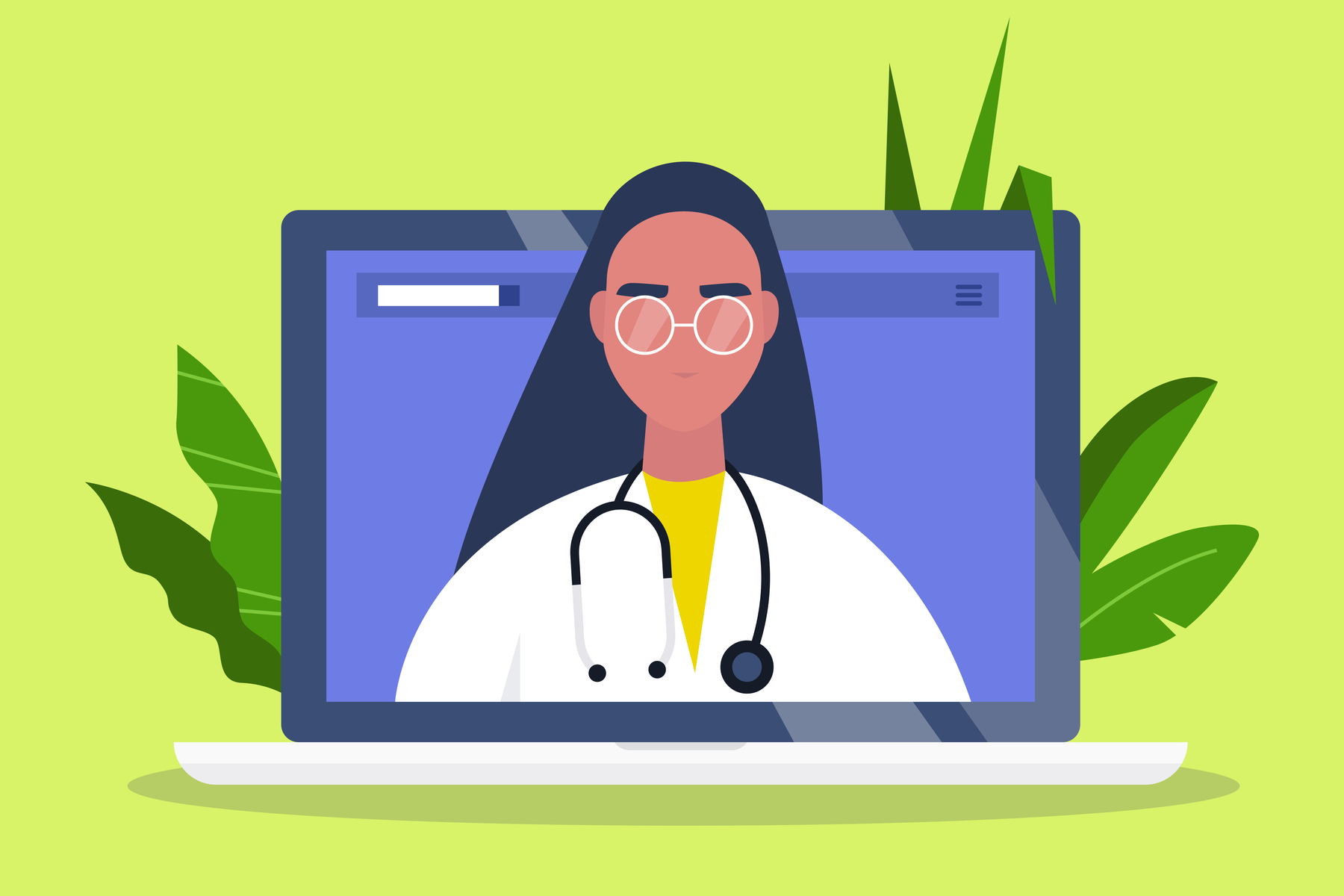 This past week, my mom had a fall and had to consult our doctor about a swollen left foot. She was able to do so within the confines of our home in suburban New Jersey. The doctor had her self-assess the injury while continually asking her about her pain tolerance. He was able to write and fax a prescription for her to get an x-ray, which was promptly done only 1.5 hours later. By the end of the day, the doctor received the results of the x-ray and was able to identify the type of injury and lay out the next steps.

Telemedicine technology has been drastically changing since its inception. Given the current restrictions placed on our lifestyles due to COVID-19, telemedicine is becoming more common.

Medical professionals who use technology to diagnose patients remotely are practicing telemedicine. Today most use video conferencing. However telemedicine has been around since the days of radio transmissions and landline phones.

The Cold War brought more advancements to telemedicine because of the scientists who were plagued with medical questions sparked by the removal of gravity during the “Space Race.” NASA’s program, Integrated Medical and Behavioral Laboratories and Measurement Systems (IMBLMS), was founded in 1964 specifically to help with the monitoring of spaceflight on the human body. A few years later, 911 was commissioned as an emergency communication service, which, by extension, helped to increase access to medical care.

In addition to faxes and phone calls in the early 2000s, other methods of telemedicine started to rise, including store-and-forward kiosks (asynchronous telemedicine) and remote monitoring. In general, practices of telemedicine were seen between facilities (like faxes), among rural populations with limited access to healthcare.

“Telemedicine was used in the outpatient setting as a way of following up chronic conditions instead of mandating people to come into the clinic. However, telemedicine was more of a luxury than a necessity,” said Dr. Bhavik Gupta, a medical resident at Georgetown Hospital.

Since telemedicine was perceived as a luxury, there weren’t as many resources that went into supporting the technology or building its use.

Newer concepts of telemedicine include tech-enabled mental health and on-demand services, where you can video chat or message a physician at any time for generic medical advice. Of course, using anon demand service may require an additional appointment for a specialist to evaluate the medical condition further.

Telehealth is the generic term that encompasses telemedicine and other nonclinical forms of communication, such as tech-enabled mental health. In addition to traditional in-person therapy appointments, end users can video chat with their therapists. Patients can also talk with mental health services rather than book in-person sessions (ex. Talkspace).

Ranga Jayawardena, the co-founder of HIPAA compliant telemedicine platform BeamHealth, views telemedicine as a solution that should be implemented across the nation as a general practice. “To me, it was a no brainer. If you want to improve access to care and make doctors more efficient, just give patients the ability to connect with the healthcare provider conveniently. The lowest hanging fruit is telemedicine,” said Jayawardena.

In addition to being a convenient outpatient service option, telemedicine can be viewed as the first line of defense in preventative care. When patients can access the care they need more readily, it enables them to be active participants in their healthcare. “Instead of waiting for something terrible to happen, they’ll come ahead of time, which can be a real positive,” Jayawardena says.

Telemedicine can help bring doctors closer to patients and encourage the use of health resources like it to support efforts in preventative care. In the long run, preventive care has proven to lower costs and benefit the patient. There is truth in the idiom, “An ounce of prevention is worth a pound of cure.”

Access to providers is crucial to the success of telemedicine, as well as monetary relief. Telemedicine proves to be a fiscally conservative solution to get minor problems checked. A telemedicine appointment costs approximately $70 less on average than an in-person office visit. “It’s a great screening tool. If I have a cold or if something feels wrong, and I want some quick medical advice, telemedicine can be beneficial,” says medical student Ishaan Jain.

The Surge of Telemedicine during COVID-19

It is no surprise that the pandemic required an urgent coronavirus-safe response from the healthcare industry to supply a method of communication between patients and medical professionals. Telemedicine was the saving grace, and the relaxed Center for Medicare and Medicaid Services (CMS), Department of Health and Human Services (HHS), and Drug Enforcement Administration (DEA) guidelines helped the industry to jumpstart giving care. “Now, we are using telemedicine to decrease exposure risk and try and still see the backlog of patients that need to abide by a stay at home orders. For most primary care practices, telemedicine is beneficial because it allows frequent follow-up and averts the need to schedule an appointment that can often change the last minute,” says Gupta. Although a needed technology today, many hospitals and healthcare systems didn’t necessarily indulge in the idea before.

“Big players in healthcare didn’t take a more serious look at telemedicine before COVID. So when COVID hit, a lot of them had to scramble to get some sort of solution up and running,” Jayawardena comments.

Mount Sinai, an extensive medical system in New York City, responded to the coronavirus by implementing MediSprout. Echoing Jayawardena’s sentiments, Laurie Keefer, health psychologist and director of subspecialty medical, explains the benefits of telemedicine. “We have seen that the more tele-visits to have with our patients, the less likely they are to visit the emergency department or be hospitalized for care,” Keefer said. “This drastically reduces healthcare costs, as an average hospitalization can cost $50,000.”

While healthcare costs are saved, investments are also being made in this industry. Per Fierce Healthcare, “Venture capital funding for telemedicine companies surged in the first quarter of 2020 to $788 million.”

The boom in investments and interest in telehealth not only combated unemployment in those spaces but also resulted in technology companies pivoting their product capabilities to address the current consumer needs somehow. For example, ZocDoc, a prominent healthcare technology platform, moved to include video appointment options for patients and providers.

Of course, not all procedures can be aptly addressed with telemedicine. Jain says, “There is always the concern that things might get missed. A lot of times, people will come in, and they won’t even realize something’s wrong, and you’ll notice their fibroids enlarged so they may have a heart murmur.”

Many conditions require follow-ups involving scans, tests and other in-person procedures that cannot be replaced by virtual communication. The extent to which telemedicine proves to be beneficial are often still in outpatient settings but stretch to include more common practices associated with primary care visits, including my mother’s visit.

On the other hand, some patients are routinely receiving check-ins due to the nature of their condition. “There are a lot of patients who have diabetes and might be coming in every two months or so. A lot of times, things don’t change on a physical exam all too much for a diabetic patient,” says Jain.

The follow-ups for the labs and any prescription refills can be done using telemedicine, with in-person appointments sprinkled in for any necessary tests.

Insurance, an industry associated with disgruntled customers calling about ridiculous claims, is changing its policies surrounding coverage for telemedicine appointments. Government insurances will cover telemedicine services. Many large providers also have begun to include theories surrounding telemedicine coverage. “Once you give something to the population at large, you can’t take it away. I suspect that this will happen with commercial insurances as well. So, one of the good things about COVID is that telemedicine should be much easier to get a covered post this pandemic,” Jayawardena says.

While this may paint a rosy picture, many are still struggling to get fees waived. Once viewed as a mostly unsympathetic industry to many consumers, insurance can rise from the pandemic with the potential to help keep money in people’s pockets.

In a Post-COVID-19 World

The pandemic placed telemedicine on the map.

“We used to have to spend time explaining to doctors and hospital administrators why telemedicine was essential and why it would be a part of the future. That entire conversation is no longer necessary,” says Jayawardena.

The pandemic has proven that telemedicine can make an adequate, if not a more convenient substitute to confident in-person appointments. More individuals are empowered to think about their health activities and can access many health services through apps on their phones. The variety of telemedicine available, from mental health appointments, chat rooms for any minor skin rash, to video calls with your PCP, have proven that medicine is closer to our fingertips than ever before.

At the start of this pandemic, many people simply didn’t trust the value of telemedicine.

It comes as no surprise that many healthcare professionals and patients see the value in in-person appointments. Gupta believes that sitting face-to-face with your doctor is a large part of the healing process.

“Overall, I think there has been no greater experiment with telemedicine than now. Now, out of necessity, I think we have realized that telemedicine works equally as well and, in some cases, can reduce the large burden that was previously being experienced in the healthcare system as a whole.”