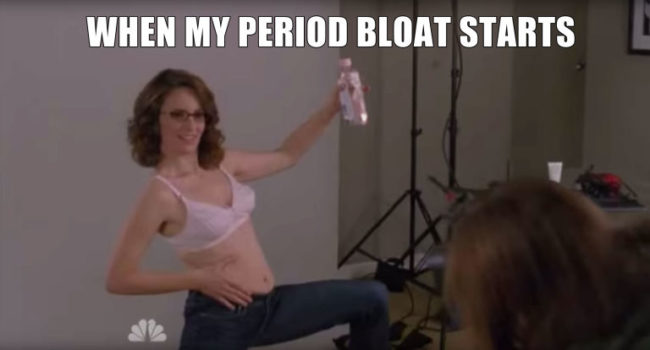 Seven. That’s how many years of innocence I had before I was interrupted with the burdens of puberty. Let me clarify – it wasn’t full-fledged puberty but that was the moment that I realized my body was changing.

It all started with a t-shirt. Summer was approaching; clothing was becoming tighter and my t-shirts were clinging to my “budding breasts” as the doctor referred to them. It was a bit overwhelming, especially the conversation that followed.

The doctor began to then explain that in the next few years I would begin menstruation. I had never heard the word before so I listened. I waited until we were in the parking lot to ask my mom about what the doctor said would soon happen to me. It was clear that my mother didn’t really have a way to answer my complex question.

I’m sure in that moment she would have preferred if I asked the doctor, who would have given me an answer she had rehearsed many times before. But instead, my mom, flustered by my question mumbled an answer and the only part I remember understanding was menstruation is the process a girl needs to have a baby. I knew women had babies, so there was some logic to this very vague explanation and so for the next couple of years I never thought about menstruation or womanhood again.

Following the doctor’s appointment, the only thing that really changed my elementary days were the camisole-type training bras my mom chose for me to wear under my shirts, which I decided to buy not so fitted because it appeared as though I was the only second-going-on-third grader who was “budding.” I was mortified by the shopping experience – the chance that someone from school could see me buying a bra. I didn’t hate the bra as much as I disliked the fact that I was the only third grader wearing one. Fast-forward a year to the first week of fourth grade.

I had just turned nine years old. School had just begun and I was still excited about my new Lisa Frank pencil case and the fact that now as fourth graders we had bathrooms outside our classroom. Thank God for small miracles.

On one bathroom trip, I noticed small drops of blood on my underwear. Yes – at school! I had no idea how the blood had gotten there! But I, for sure, wasn’t going to ask my teacher or mention it when I got home. There were only two logical explanations I could think of: I had somehow cut myself or my eyes were playing tricks on me.

For a couple days, I thought I could wipe it away. But it wasn’t working. I had seen my mom and older sisters buy pads but I had never asked what they were for. I opened the bathroom cupboard to possibly use one but wasn’t exactly sure how to even put it on. I decided to keep my secret to myself and just place a napkin in my underwear. Fear began to build up within me because, quite frankly, I thought I was slowly dying. Over the next couple of days, the couple of drops began to worsen. At the end of the week, during school one day, it seemed like gushing blood. I freaked. I asked to go the nurse.

“What’s wrong?” she said. The only words I could muster to reply was, “I have a cut.” I didn’t know how to respond. Then she proceeded to ask, “Where?” My head down in shame, I had no answer. She knew. She picked up the phone and called my mom and explained that at nine years old, I had gotten my period.

My mom soon arrived at school with a huge smile on her face. Confused was an understatement.

I couldn’t understand what the excitement was about. She began to describe how I was finally a woman but even then it didn’t make sense. It’s as though, in all the excitement my family failed to realize that I didn’t know what womanhood or menstruation was.

My eldest sister met us at home with a cake that read, “CONGRATS!” She then took me upstairs and explained that I would need to wear a pad because wiping it away wasn’t an option. I was disappointed and frustrated. She showed me a pad and I began to cry. I was only nine. It looked like a diaper. I just kept repeating, “I don’t want to wear a diaper.” They were rejoicing my womanhood but all I could think was I’m just a child.

That’s not even the worst part.

In all the celebration of my womanhood, there was never a full explanation of menstruation–more specifically there wasn’t any clarification on the link between menstruation and pregnancy. At nine, when you don’t understand menstruation or expect it and all you keep hearing is the excitement of “now you can bear a child!” it’s confusing.

For the next couple of weeks, I stared at my naked silhouette in the mirror and in the shower, thinking that I was bearing a child. In my mind, my stomach had begun to grow. I would push it out trying to imagine what I would look like fully pregnant.

Finally, I was so anxious, that I worked up the courage to ask my sister. She laughed and explained that menstruation ALLOWED woman to have children, but that there was an “act” between a man and a woman that created a child. She didn’t get into the details and to be honest, the past series of events had been so eventful I wasn’t even that curious.

My mom, however, wanted me to have more knowledge about the female anatomy without the awkward conversations. This resulted in random library books, with titles such as “Getting her First Period,” left in my bedroom. Like her, I wanted the subject to just pass, so I pretended I didn’t see the books.

For a while, it felt like our relationship had changed, as though she was constantly at a loss for words. But eventually, the awkwardness passed.

However, what I couldn’t avoid was the constant bodily changes that followed that first period. It’s as though each day I noticed something different, the most annoying part was the crazy amount of hair. The doctor never mentioned hair.

Never in my life had I examined my body so much. I felt guilty; were people supposed to look at their bodies, naked? I knew my friends weren’t having such issues. For sure, they weren’t getting their period. I was so ashamed. It was as though, in the middle of fourth grade, only my body decided to change. I wanted to wear only baggy clothing to hide this but at the same time, I, too, wanted to fit in and be a pretty little girl. But I wasn’t a little girl anymore. At nine years old, I had become a woman, an extremely awkward woman.