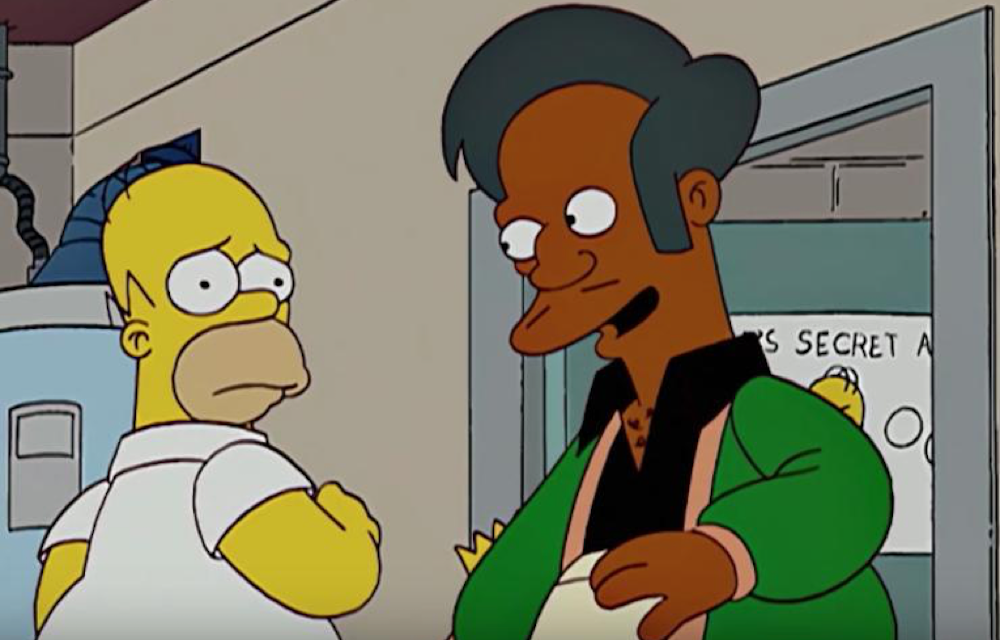 With his 2017 documentary “The Problem with Apu,” comedian Hari Kondabolu analyzed the different stereotypes and clichés that “The Simpsons” animated character, Apu, represents. He boldly and publicly denounced Apu, calling him a racist depiction of South Asians. The aftermath of the doc has been a mess of racially insensitive responses, much like the character itself.

After the airing of the documentary on TruTV, the actor who voices Apu, Hank Azaria (a white man), spoke out about what he saw. He claimed his “eyes have been opened” and he is willing to have a dialogue on this topic.

Following that, “The Simpsons” released their response in a 21-minute episode titled “No Good Read Goes Unpunished.” In the episode, Marge realizes that her favorite childhood book is full of offensive content that she was previously ignorant of. Through this narrative, “The Simpsons” delivered a highly misguided response from a place of privilege on whether they think they are being racist.

Racism disguised as humor is arguably the most insidious of its kind. It disempowers the subject of the joke and allows the person making a joke a foolproof excuse to defer any responsibility or blame.

Racist jokes perpetuate racism. This isn’t news to anyone. But hiding racism in comedy masks that harm in humour, giving the illusion that it’s comparatively not really that big of a deal — which can arguably be more detrimental. Anyone who raises a voice against such humour is automatically “being too sensitive” or “can’t take a joke.”

On the other hand, it allows the people in power, namely white people, to laugh at racism and in doing so, dismiss it. They get to benefit off the power of their whiteness and diminish people of colour for things they can’t control, like their accent. It creates the idea that if racism is funny, it’s okay.

The problem with this is that the people in power get to decide what’s funny and what’s not. While the people suffering from the damaging effects of the joke get no input in that decision. If they question it, they are silenced.

“The Simpsons” uses a similar tactic to discredit accusations of racism. In the documentary, a writer of the show, Dana Gould, says, “but it’s [Apu’s accent] funny.” However, it’s funny because it plays up racist stereotypes based on a larger system of oppression that persecutes people of colour. So why is that okay?

Hollywood’s representation problem remains because white content creators refuse to address the root cause of it. White defensiveness in the face of racism allegations is what really stalls any conversation. We see it with Dana Gould and Hank Azaria in the documentary, but we’ve also seen it before all over the industry.

It is this exact attitude that hinders an honest dialogue on racism and representation in the media: Because white content creators are too worried about being called racist than actually focusing on the harm they are causing. They grasp at excuse after excuse to take the blame off themselves. “It’s funny” or “I have a job to do” are weak explanations for the damage that “The Simpsons” is doing. Not only is that an insult to South Asians but to creativity itself.

At the end of the day, white content creators refuse to ask themselves the hard questions and resign themselves to a passive position when questioned on their racism. No one asks why this accent is funny or why the racist effect is worth the comedic one. No one ever acknowledges the western viewpoints that shape our understanding of “funny accents.” And no one ever acknowledges the racist bias Americans subconsciously have against people of colour. Laughing at their accent is just one of the manifestations of a deep-seated and disturbing attitude toward minorities.

Recently, Hank Azaria has gone on record to state that he believes this is an important conversation to have. Apparently, “The Simpsons” don’t think so, as their recent episode brushed off the whole issue. In the episode, Marge attempts to make an outdated and offensive book acceptable for modern times. About the process, Marge says,

“It takes a lot of work to take the spirit and character of a book but now it’s as inoffensive as a Sunday in Cincinnati.”

But it is possible to create work that has heart and character and doesn’t rely on offensive material. Ironically, this is work “The Simpsons” refuses to do.

Bill Maher also commented on this, urging people to take that same view. Recently, he asked his audience to “stop being surprised every time you watch an old movie or TV show and find some of the ideas in it are old.” He went on to tell people to stop expecting content to be “woke” 30 years before being “woke” was a thing.

But “The Simpsons” isn’t an old TV show; it’s on the air right now. And Apu isn’t a frozen-in-time character that we cannot judge from contemporary standards. He is a character in progress who is only as informed and evolved as the writers that write him now. For decades, he was sadly the only mainstream representation South Asians got, and as Kondabolu points out in his documentary, South Asians are still fighting tooth and nail to have the few celebrities who do represent the community represent them as realistically as possible.

The problem is that Apu’s origins are racist and offensive. They cause real-world harm to real people living real lives. What the show and Bill Maher fail to understand is that this isn’t political. To many people, this is personal and present, as was the point of Kondabolu’s entire documentary. Clearly, “The Simpsons” missed the point.

Read Related: “‘The Simpsons’ Respond to ‘The Problem with Apu’ — Only to Make Things Worse”]

We must ask the question: Is preserving and perpetuating offensive content worth the damage that it causes minorities? Is the spirit and character of Apu so important that the creators of “The Simpsons” are willing to risk the suffering of the South Asian community? The answer is yes, they are.

In fact, ‘The Simpsons’ creator, Matt Groening said about the Apu controversy that we all live in a time where people “love to pretend they’re offended” and clearly doesn’t care about those who have been offended and affected by a stereotypical character. Creating (and now defending) Apu was a decision they made without consulting the community they abandoned.

So, when Lisa Simpson asks,

You can stop it, that’s what you can do.