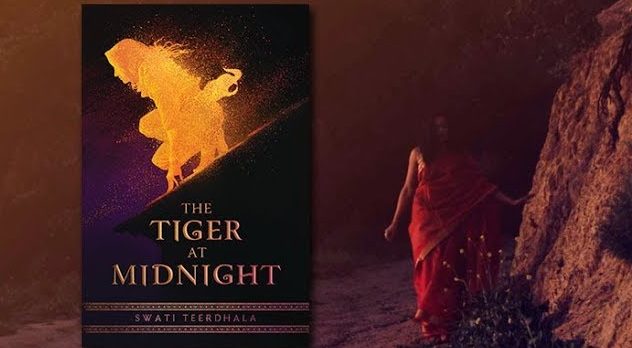 A broken bond. A dying land. A cat-and-mouse game that can only end in bloodshed.

This is the captivating premise of “The Tiger at Midnight,” the debut young adult fantasy novel by author Swati Teerdhala. The first in a trilogy being published by HarperCollins, “The Tiger at Midnight” (or TTAM) draws heavily on Indian mythology to breathe life into the fiery characters of Kunal, a dutiful soldier, and Esha, a legendary rebel spy. When their paths cross one night and Esha is accused of the murder of Kunal’s General, a dangerous cat and mouse game starts between them, one which throws everything they’ve known into question. This captivating story, with a cliffhanger that will have you anxiously awaiting the sequel, was listed by both Book Riot and Barnes & Noble as one of their most anticipated novels of 2019.

I had the privilege of speaking with Teerdhala to learn more about the book, the need and push for diverse narratives in fiction, and her own journey as a South Asian writer.

It's fitting that my book release is the same day as #DVPit, as I wouldn't be here without it or @beth_phelan. I certainly wouldn't have a whole shelf of THE TIGER AT MIDNIGHT books to remind me that dreams are possible.?? I'm so incredibly grateful for all the love and support!! pic.twitter.com/RmF3i9xHv8

In “The Tiger at Midnight,” you draw heavily on Hindu and Indian mythology in the creation of the universe for the story. Were there specific stories you drew on within that mythology?

Yes! The world itself isn’t based off of any one myth. Instead, I pulled from ancient Indian history and the kings and queens who ruled back then. But I did weave in a lot of myths into the history and lore of the world, putting my own spin on them. One story, in particular, I drew on was the myth of how Ganga was brought down to the earth, which inspired the world and the magic of the land. There is another tale I used heavily, but it’s a huge spoiler so I can’t say!

There are a lot of smaller myths I added here and there in the book and the overall trilogy, so keep an eye out for easter eggs and tweet at me (@swatiteerdhala) if you find any!

I always knew I wanted to write a series of books that celebrated my Indian heritage and the mythological stories I grew up with and a homage to my childhood.

I first got the idea for TTAM when I was traveling and visited an old Fort. It was the first spark of an idea of what the story would become and the first time I heard the voice of Kunal, one of the two main characters. I looked out from one of the old window openings and wondered what would be the most odd or startling thing a soldier of old might have seen. A girl. And that’s the opening page of TTAM.

Describe “The Tiger at Midnight” in three words.

Describe the sequel in three words.

You are a marketing professional working in New York City. How did you find time to write “The Tiger at Midnight” and secure a book deal while juggling your career? How have you managed to navigate two careers at once?

Organization and routine have been key. I carve out time before my job to write and have stuck to that schedule for over two years now. Dedicating that time to my creativity and writing has been one of the main ways I’ve been able to balance my career with my writing, which started out as just something I did for myself. It’s definitely been hard! I have to be really clear about how I spend my time and deliberate about the breaks I take. But it’s definitely worth it – I love both writing books and working in tech marketing.

Do you have any advice for aspiring writers who are still juggling their 9-to-5 jobs?

Find the time that works best for you and ruthlessly prioritize the rest of your life around it. Your dreams should be celebrated and given the time they deserve!

Who are some of your other favorite South Asian YA authors?

So many! Sabaa Tahir, who is the author of the ‘Ember in the Ashes’ series, Roshani Chokshi, who wrote ‘The Star Touched Queen’ and ‘Aru Shah and the End of Time,’ and Sona Charaipotra, who co-authored ‘Tiny Pretty Things.’ I also loved ‘The Library of Fates’ by Aditi Khorana, and ‘A Spark of White Fire’ by Sangu Mandanna.

.@swatiteerdhala reveals that Kunal from TIGER AT MIDNIGHT is a GryffinPuff™? and if that isn’t a reason to buy her book today idk what is pic.twitter.com/WDjszrmkn7

What do you hope readers get from “The Tiger at Midnight” — especially South Asian readers?

I wanted to write a story that celebrated my Indian heritage and tackled the issue of finding your own path, despite familial pressure and duty. I think it is a common challenge for second-generation immigrant kids in America. That’s a huge part of what both Kunal and Esha deal with during this book — their duty to themselves versus others. Esha and Kunal both struggle with this idea in very different ways. I hoped to craft a story that tackled that tension between duty and self.

Publishing is moving toward looking for more diverse stories, especially after the success of books and movies like ‘To All The Boys I’ve Loved Before‘ and ‘Crazy Rich Asians,’ among others. However, it’s a slow change and in my own journey, I encountered moments where there felt like there was a quota for the amount of diversity that was allowed. At one point I was told that ‘they already had a South Asian book,’ which is pretty ridiculous. There are hundreds of books about a fantastical medieval Europe, but two books that are South Asian (which could mean any number of nationalities and ethnicities!) is out of the question.

What are the changes you hope to see in the publishing industry to promote more diversity in YA novels and fantasy novels?

I think the biggest change will come from having more diverse, marginalized identities working in the publishing industry. Having those voices at all levels will help elevate those stories that might have been ignored before.

What are some things readers and consumers can do to help promote diversity in publishing?

Buy books by diverse authors! At the end of the day, publishing is a business. I liken publishing to Hollywood in some ways. When ‘Black Panther‘ and ‘Crazy Rich Asians‘ were successful monetarily, there were a whole slew of new projects by African American and Asian writers that were funded. It’s an unfortunate truth, but diverse creators do have to prove that our stories can make money.

What is your hope in the short-term and long-term for this novel and series?

“The Tiger at Midnight” is Swati Teerdhala’s debut novel, the first in a trilogy published by HarperCollins. Now available on Amazon and at Barnes & Noble.