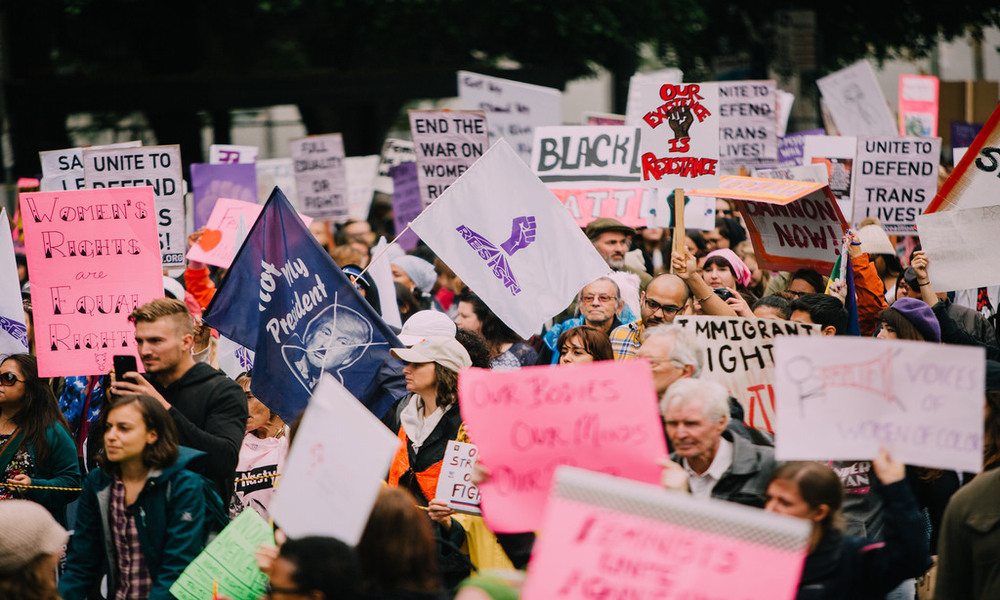 In 2017, I took my disabled husband who was battling cancer to our very first Women’s Day March after his sixth brain surgery. Wheelchair and urinal in tow, we joined thousands of New Yorkers on the streets of our city to protest for a better future for the daughter we never had, for each other and for the women of this world.

We both wore pink turbans. People were kind, people were patient. People who otherwise felt frustrated that my husband’s wheelchair is taking too much space on the pavement offered to help push him along. It was tearfully uplifting and in a time when I existed only as the proud wife of this man, this March was the most powerful contribution I could make to a country that I felt was destined for doom. We never claimed to be feminists; we were just equal in all ways a couple could be in our NYC apartment, where he was quickly losing the battle to brain cancer.

For two and a half years, I lived in a cocoon of my own existence fighting desperately to keep my husband alive. I continued to be an outspoken activist but in a rather personal way. So when my husband passed in September of 2017, it did not occur to me that I would be entering a completely different world. A world in which the term “Feminist” had become so corrupt that today, I cringe to be associated with it. A world in which my so-called male allies had stolen the title of Feminist while not understanding the ethics, yet felt that the female body was their victory. I was not ready. I am still not ready—but I am certainly very angry.

In moments of excruciating loneliness and just frustration, I found myself dating again. I did not know that we had reached a point in Herstory where men claimed Feminist as a title, where Herstory was being re-written, and in that process, women were still not the protagonists. The label of Feminist is one that I struggled with but fought to commit to since childhood as the third daughter of a Punjabi family that had no sons. My faith taught me I was sovereign, and I took that literally. I believed I was sovereign and I knew that my sovereignty was under attack by men, racists, and even women. But I was a fighter. I fought my mother, my father, my community and the world at large to stay true to my sovereignty. So, I thought that if I dated these self-proclaimed male feminists as a widow, I would be entering a guilt-free world of dating as a widow.

My faith broke when I encountered one particular male feminist. It was yet another man for whom it was a cute hashtag. He did not understand the struggle of women beyond a theoretical phenomenon. In an era where we are taking back the streets to march for women’s rights, amongst us are so-called male allies. They march with us and shouted slogans with us. They call themselves soul rebels and activists but lost humanity and compassion in the process. They did not live the pains of being a woman; they read the books and made philanthropic donations. They did not look into our eyes and souls and understand that our dignities and bodies cannot be excluded from the movement. They did not understand that our bodies go beyond consent.

It was when I ended up in the OBGYN’s office for an emergency visit, in tears, and in pain, that I realized that the reality of dating a male feminist was isolating, hurtful and quite maddening. If my grief was not making me mad, then when I encountered him, I was certainly driven to madness. The disbelief of what I had accepted and had happened left my bones aching and my body in shock. It made me want to peel my skin off and let a new layer grow.

When I finally mustered up the courage to tell my so-called male ally that I felt insulted and stripped of my dignity, he was angry. He told me he was incapable of being a monster because he was a feminist. He simply asked me if I was “OK” via a text message. Two letters that were expected to emote empathy. These are the type of men that take advantage of a movement for the equality of women. Women have allowed it to be infiltrated by men who will always come from a point of privilege. It will be used against us when we are in-dignified by these men when our bodies are treated as objects and our souls and feelings considered invalid. These men will shield their shame with a movement that was supposed to empower women. We will fight not only for equity but for emotional justice.

This was not an isolated incident of how male feminists behave. It was the worst incident I encountered. As a brown woman and a new widow, I carried shame. I carried cultural shame, the would-be shame of male feminists who violated me and my own shame. I did not tell anyone other than the OBGYN what had actually happened until one day, I had a panic attack and broke down. I still carry shame. A shame that is not mine to carry.

During each heated fight of trying to reason with my male feminist, he defended his actions and behavior with his feminist leaning politics. Months later, I received an apology. I looked him in the eyes and saw the insincerity of the apologetic words and knew that I could never forgive him. The apology came with an asterisk that although he apologized, he had suffered too. He had suffered because I had unleashed the wrath of a woman and was visibly angry. I had questioned his entire being; I had cursed him; I had been ”mean and rude” and I had set his ethics on fire, which were all unacceptable for him.

I told him I would be writing this article. It was not a threat—I had just had enough. This is my truth. I am telling my story. I am putting my shame on the shelf. I am pleading with male feminists and allies to understand the complexity of the female struggle. Give women their dignity, give a sincere apology and have the capacity and patience to heal us if you hurt us. These acts of feminism will be the most powerful contribution you will make to women and their struggle. To the future daughters that you may have. Through these actions, we will not lose our dignities and we will be believed, and our bodies will remain autonomous.

Dalveer H Kaur is a public health professional working on the opioid epidemic. Over the past 10 years, her work has aimed to address health inequalities through policy and health innovation programs in the UK and the USA. She has spent the past five years working on the opioid epidemic, communable diseases and mental health. She started her career in India 15 years ago in the field of international human rights after attaining her Masters from Columbia University. Dalveer is a grieving activist and storyteller who occasionally blogs and is sometimes seen performing in the world of stand up.