About a year ago, I recorded Taylor Swift’s “Love Story” and John Legend’s “All of Me” for two friends’ weddings. It was a lot of fun and a unique experience playing the songs on sarangi. Working on those covers laid the foundation for the songs that I’m working on now.

For this “Work” recording, it was a really quick process; we just wanted a rough demo. My friend Arpit Pathak and I got together one afternoon and did a couple of songs (“Love Yourself,” by Justin Beiber is our next project).

This was the first time that we played together, but we instantly gelled, which was pretty cool. We just set up in his basement and recorded on his phone. We went through both songs a few times, and that’s what you see and hear in the video.

I’ve been playing the sarangi for about three years now. Typically, I learned more classical, raag-based pieces with my teacher, which I really enjoy.

One thing I have noticed is, how difficult it is to find people to teach you or help you when it comes to repairing the instrument (I broke a lot of strings in the beginning, unsurprisingly). You can find an experienced sitar or tabla teacher in almost any major US city. That’s not the case with the sarangi. I have to Skype with my teacher in India. Seriously.

Even in countries like India and Pakistan, the sarangi is struggling. You will often hear a violin substitute for the sarangi in classical music. In Pakistan, they’ve begun to pay young students to try and entice them to learn the sarangi. It is a high-maintenance instrument with around 40 strings and an unnatural playing style; you place the part of your finger just above the cuticle, rather than your fingertips, on the string. That makes the sarangi unique compared with violins, guitars, sitars, etc.

On top of all that, the sarangi has been pigeonholed into a small niche of music: heavily classical or really sad music. I think that discourages potential students; they think that there aren’t too many applications for the instrument and that you can only play these really intense (but beautiful) pieces on it, instead of being able to just have fun.

[Read More: “One Brown Boy’s Kathak Dance Moves Will Have You Dancing to Beyonce’s 7/11“]

However, I believe the sarangi is a very versatile instrument in the range of emotions it can convey, the variety of instruments it can accompany or lead, and the types of songs it can handle. For that reason, I decided I wanted to put together an album of covers (from Western Pop to Bollywood to Indie Rock to Country and everything in between) to showcase the sarangi’s versatility and expand the instrument’s audience. This “Work” video is just the beginning. 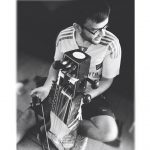 Rameez Anwar is a multi-instrumentalist, producer, songwriter, and founding member of the band Modeltown. He uses music to explore his own identity and to connect with others. Rameez is currently working on a cover album featuring the sarangi, “Sarangi Season.”