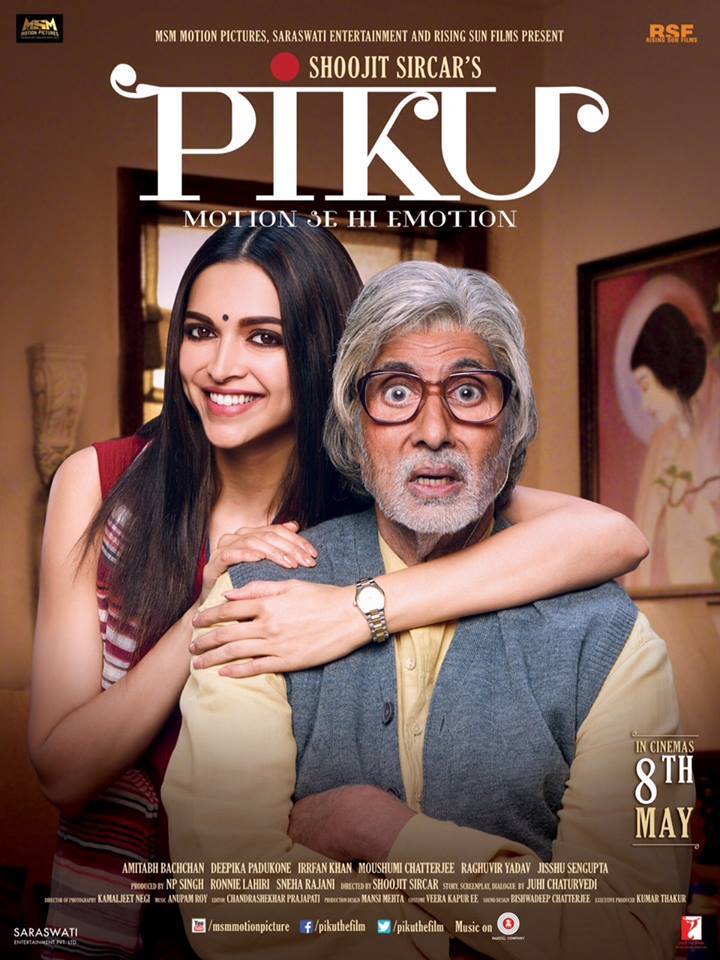 Father’s day is right around the corner! This year, show dad that you two are not the only ones that have ups and downs by watching the film “Piku” together. This light-hearted comedy, starring Deepika Padukone and Amitabh Bachchan, offers a refreshing insight into the relationship between a modern-day desi father and his daughter.

Dashing actors and actresses, elaborate dance sequences and, of course, the elaborate love stories—that is what Bollywood cinema almost always focuses on, but sometimes there is a film that really stands out. Maybe it’s because he or she is in love with Ranveer Singh, or maybe just because the songs were so catchy! Surprisingly enough, neither of these reasons were why I personally felt so emotionally drawn to Piku.

From an outsider’s perspective, the plot seems to simply be something like an old father complaining about his chronic constipation while also embarrassing his daughter. As much as this is shown, there are in fact some underlying motives.

Some critics have said the film portrays a realistic and typical family. I disagree and I’m glad it does not.

Here Are Three Reasons To Appreciate “Piku” This Father’s Day

Let’s face it, a standard desi family life does not include open conversations about bowel movements and sex. Speaking about sex, in particular, could cause a catastrophe. It just doesn’t seem normal to speak about these private subjects, especially with a father. Well…that’s because it’s not. Our beautiful, yet complex culture, has taught us to not speak out about these normal, human activities. In fact, our culture prevents us from speaking openly because it is seen as something only “classless” people would talk about.

Our beautiful, yet complex culture, has taught us to not speak out about these normal, human activities. In fact, our culture prevents us from speaking openly because it is seen as something only “classless” people would talk about.

As a girl, it is especially hard to speak out about sex.

The stigma around sex has caused countless numbers of girls to remain silent about sexual assaults against them. These victims worry about what their families will think of them, what other people in the community will think of their entire family and possibly the worst is what will happen if other people do not believe her.

Deepika Padukone plays Piku Banerjee, a multitasking architect who balances her career with taking care of her somewhat eccentric father, Bashkor Banerjee(Amitabh Bachchan). He seems to be eccentric when it comes to his health, going to the extent of calling Piku’s office and explicitly describing what his bowel movements looked like. Along with freely discussing his bowel movements,

Along with freely discussing his bowel movements, Baskor seems to enjoy telling eligible men for his daughter that she is “financially, emotionally and sexually independent, non­virgin woman.” What seems strange and exaggerated, Piku’s open (yet ever respectful) bond with her father humorously represents an important factor that any Indian daughter should be able to easily have with her father.

That factor would be living in a comfortable household where the topic of sex is not pushed under the table.

Imagine if all brown girls lived in a household where they could tell their parents they were not virgins, whether with or without consent. If without consent, going through something so dehumanizing is awful as it is, but being silenced by an act as a victim would definitely hurt even more both physically and mentally. A girl telling her family without fear of any backlash from them could essentially be a huge step in the right direction about how sex and women are perceived as a whole in an extremely patriarchal society.

2. Piku is not married

In the large male-dominated society of India, marriage has been and continues to be an important social institution. Daughters are to be married either in their early twenties if they are not going to school. However if a woman is being educated, the proper time to get married would be around twenty-six. This way she can still have children “at a good time.”

Piku’s dad is actually against his thirty ­year-old-daughter ever getting married. Despite the fact that he continuously says he needs her to take care of his serious medical issues, the viewer catches on that these “issues” are pretty far from serious. He was also so opposed to the idea of getting his daughter married because as a man who lost his wife, Piku was all he had. The thought of her leaving the house caused tantrums and major arguments. This means that Piku is a single, thirty ­year old woman who was put through more schooling than an average Indian girl. Best of all, she has her father’s support.

Another point goes to Bashkor.

3. In fact, there is no focus on any romantic relationship

No “Raj” chasing her lover through a field of flowers? No dupatta flying away in the sudden wind?

…You mean a Bollywood film with NO love story?!

While Rana Chaudhary(Irrfan Khan) and Piku do seem to have some sort of romantic attraction, neither of them pursue each other. However, that does not necessarily mean there is not a love story.

There is not a time, even when irritated or embarrassed, that Piku does not do everything in her power to care for her father. She drops her work to run home and check on her dad, even when she is well aware he is okay. Regardless of his bizarre demands with his outrageous manners, Piku always fulfills her father’s requests.

Piku and her father’s relationship is admirable and beautiful. Their unconditional love keeps Piku from being ashamed of his behavior like most people would be. That love is how they are able to so easily speak out personal matters. Most importantly, that love is what keeps them together despite all the times they clash heads. This type of love is greater and more powerful than any “dupatta­flying, Raj­running” love story.

During our hectic schedules, we lose track of what’s important. Somewhere along the way, we begin caring more about what society will think. The reason we want to be successful in the first place might evolve into selfish justifications based off of those social pressures. The most imperative factor that we often lose sight of is why we are even here today. That is why people need a reminder about the obvious yet vital reasons why we are waking up every morning, working with loads of determination and needing to ignore those who do not matter.

Piku embodied every feminist’s dreams? being a highly­educated woman who did not care about what those around said about her lifestyle. She did what she believed was right, and that was all that mattered. Bashkor did personify a stereotypical older, Indian man (in the sense of always being worried about a health condition and complaining.) The key characteristics of his personality to keep in mind was how a typical his relationship with his daughter was, and how he never cared what others had to say. These three simple reasons are not only great reminders of what is actually important, they are also three eye­opening concepts that every brown daughter deserve to have in their life and every what brown father should learn to become.

Archana Singh is a third-year journalism student based in Florida. She has a passion for learning about religion and American History. She also might have an ever growing obsession with all things Bollywood. Her favorite books vary from famous biographies to the Harry Potter series. Follow her on Twitter @ArrrchuD2.