This piece was originally published on chaiwallay.com.

As I passed by you earlier today, you spat out astaghfirullah (I seek refuge from God) with the ferocity of a Muslamic MC, simultaneously shaking your head from side to side like the dog in that Churchill advert.

Are my sartorial choices that un-Islamic to you that you seek redemption from God on my behalf?

Perhaps, there was something wrong with the physical aesthetic of my hijab.

Did I violate the unofficial code of conduct for Acceptable Hijab Wrapping Standards (2015), by wrapping my hijab around my head the ancient Egyptian mummy style?

Were there too many pins stuck in my head so that I resembled a walking pin cushion, or worse, a voodoo doll?

Maybe it was the Iranian hijab style I adopt, which makes me look rather like a female reincarnation of Elvis Presley wearing a hijab, what with my hair jutting out like a quiff at the front.

I flatter myself, but perhaps, the sight of my beauty was so spell-binding, so breathtaking that you were attempting to dispel lustful, haraam (Islamically unlawful) thoughts that erupted into your mind.

But a word of sisterly advice if I may, my dear Brother.

If your intention was to compliment my beauty, why on earth did you use the word astaghfirullah?

There are many Muslamic (Muslim-Islamic) alternatives for you to incorporate into your vocabulary, if you want to win the heart of a lady with religious rhetoric.

Instead of astaghfirullah, why not subhanallah (glory be to God), inshallah (God willing), or better yet, mashallaaaaaaaaah (God willed it)?

It is a fact that is universally acknowledged that every Muslim woman has received at least one elongated mashallaaaaaah from a cat-calling Brother during her lifetime, but alas! There has been little evidence to suggest such interactions have blossomed into fruitful Hollywood-esque romantic comedies.

But believe me when I say that unless you want a woman to think you are a senior member of the Haraam Police, mashallah is a far superior alternative to astaghfirullah.

Yes, I know. Society likes to portray Muslims as one giant convent of medieval monks and nuns, spending our lives separated from the opposite sex as if they were the Bubonic Plague. The fact that Muslims are equally culpable of this makes you feel as if romantic eloquence of the tongue can only be acquired through what you perceive to be the ‘halal’ pickup line that is astaghfirullah.

But to quote something a wise Shaykha (Islamic scholar) by the name of Taylor Swift once said, “Haters gonna hate.” Muslims are, and certainly can be, just as romantic as anyone else.

Sure, we might not have Muslim equivalents of Tom Hanks and Meg Ryan starring in romantic comedies such as ‘Sleepless in the Masjid,’ to guide us through our tumultuous romantic lives.

But, if anything, the vast number of halal pickup lines that we 21st century Muslims have created, such as: “I want my children’s jannah (heaven) to be under your feet,” is testament to our romantic prowess.

And if you think bestowing mashallah upon a woman is sinful, fear not! As my mother likes to say, there’s nothing wrong with admiring God’s creation, right?

You don’t have to be a Muslim Shakespeare to capture the heart of the ladies, my dear Brother, nor do you have to be a Haraam Police, astaghfirullah-spitting individual. Unfortunately, we can’t rely on cupid to prick people with love arrows because (let’s face it), that would actually be totes haraam.

With the holy trinity of subhanallah, inshallah, and most especially, mashallaaaaaaah at your disposal, how can you possibly go wrong?

So the next time you want to drop an astaghfirullah on a sister, just remember, that won’t make you her mister… 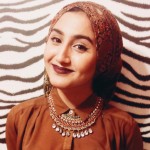 Aina Khan is an avid writer, piano player and chai enthusiast who lives in the UK. A linguist by day, Ms Marvel by night, she battles the forces of good and evil wielding her hijab as a Weapon of Mass Seduction. If all attempts at launching a career in journalism fail, she intends on succeeding the naturalist David Attenborough as his Desi protege.