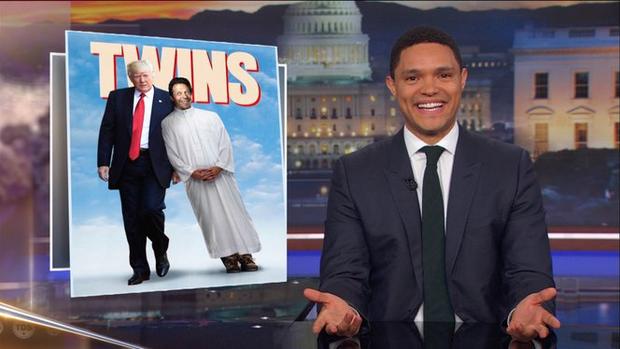 The Daily Show, with its balance of parody and political commentary, is an integral part of American politics and how people understand both global and domestic issues. However, the comments made by host Trevor Noah on Pakistan’s newly elected Prime Minister Imran Khan caused an uproar amongst the diaspora. Noah compared the newly elected prime minister to U.S. president Donald Trump in a five-minute segment with comparisons regarding several factors of their lives. However, the comments read as incredibly tone deaf and wildly uninformed.

This was a huge disappointment for Pakistani viewers all over the world who follow The Daily Show for a refreshing take on US politics. Instead of respectfully reporting on a country like Pakistan which has had a successfully fair election after years of corruption and vote rigging, Noah followed the path of other TV pundits like Bill Maher for example, who care more about sensationalization and punchlines than nuanced analysis.

U.S. media time and time again has reported on Pakistan with takes varying from the Islamophobic to orientalist without any true understanding of the state, its politics or its people. Pakistanis have suffered due to this kind of rhetoric in the past with Islamophobic incidents, microaggressions and misinformation becoming commonplace.

Noah’s first point of comparison is the privilege that both men share. Trump is known infamously for boasting and sometimes lying about his wealth and privilege in tone-deaf ways without ever genuinely acknowledging his position of privilege. Khan, on the other hand, is someone who has recognized his privilege multiple times and is someone who actively uses it to lift others who are more marginalized. This can be seen by his appointment of multiple women to his party, Pakistan Tehreek-e-Insaf (PTI) who hold leadership positions and appointing religious and ethnic minorities to represent their respective regions. Khan has also established not one, but two hospitals dedicated to cancer patients in Pakistan which are completely free for anyone in the country.

These are not small feats in the state of Pakistan and it shows a dedication to leveraging one’s wealth, privilege and access to give voices to the marginalized and to establish healthcare where the state isn’t able to. This, compared to the current state of the American healthcare system with repeals to multiple healthcare bills and the increasingly high cost of cancer treatment, speaks volumes about the priorities of the two leaders.

Noah’s second point of comparison between the two was the fact that he believes that both leaders have had no previous experience in politics. While Trump only currently began his foray into American politics with the previous election, Khan created and mobilized his political party in 1996 and has been building on the party but also the movement it’s created since that time. To create a new political party in Pakistan, and to continue to build on it requires perseverance and dedication. This isn’t a role that was taken on a whim, it’s something that Khan has been actively working towards for 22 years and support for him has been building since as well. Overlooking this fact is irresponsible and frankly, lazy journalism on the part of The Daily Show.

Noah’s third point was drawing on the fact that he believes that Trump and Khan play heavily on nationalism. Trump plays into the particular brand of nationalism that encourages white nationalism, the alt-right, and neo-Nazis. By contrast, Khan plays into a nationalism that aims to bring together a fragmented nation and peoples. US nationalism has continually enforced harming citizens of the global south via the arm of the American military – this can be seen with US “interventions” in South America, Southeast Asia, the Middle East and more. Trump’s brand of nationalism continues the previous trend of American nationalism that harms the global south, but furthermore, it seeks to actively harm its own citizens that have been historically marginalized. It plays into an us-versus-them mentality which is dangerous for a powerful nuclear power.

Khan’s nationalism, which he touched on in his victory speech, is open to dialogue with countries like India, Iran, and the US. He understands that in order to prosper as a state, dialogue needs to occur in a respectful and equitable manner. Khan was able to respectfully address the US even though the US military has practiced drone strikes on Pakistan. The US state’s nationalism, by contrast, has proven to be imperial in its nature and Trump, in particular, has spoken irresponsibly about Pakistan previously as well.

Noah also believes that both Khan and Trump have followers that are “young, rude and disruptive.” Trump’s followers are rude and disruptive white nationalists and neo-Nazis and they’re of all age groups as well. Their disruption actually harms marginalized groups on a daily basis from microaggressions, to outright cases of bigoted speech or worse, hate crimes. Khan, on the other hand, has mobilized Pakistan’s youth to create a “Naya Pakistan” meaning a “new Pakistan” which has reliable social services, where bribery doesn’t run rampant and where equity is possible. His rallied supporters believe that a better Pakistan is possible and that Khan who has been working towards this for the past 22 years can facilitate this change. Furthermore, Khan’s supporters have not carried out any of the hate crimes and harassment that Trump supporters often do.

In most countries, the mobilization of youth to voting polls is a huge success as an indicator of democracy, yet when a country like Pakistan accomplishes this goal, it’s seen as hypernationalism. When the West mobilizes youth like in the election of Trudeau or Obama, it’s seen as hope as the respective states’ youth care and is informed; yet when the same happens in a country in the global south it must be nefarious in nature via “disruptive” youth. It makes the assumption that the average young Pakistani voter is uninformed and unable to engage in the electoral process.

Noah also makes a comparison between the two regarding sexual harassment scandals. Trump has several notable scandals that have been proven and in some cases been taken to court as well. Trump has also made lewd comments about multiple women both off and on camera time and time again. Khan, on the other hand, has been respectful to women and happens to have a good relationship with his ex-wife, Jemima Khan, unlike Trump with his previous spouses. Furthermore, Khan’s ex-wife, Reham Khan’s statement about her relationship with her ex-husband has been widely accepted as outlandish by most publications with the consensus being that “True or not, the claims are so outlandish that they are hard to believe. And if they are hard to believe, then the rest of it can be questioned as well.”

“My book is not meant to damage Imran… (He) has been part of our lives for 40 years and meant more than my marriage to my family also… If read in an unbiased way, you will see that my purpose was not ulterior.” The issues around the alleged scandal seem to much more complicated than originally presented by The Daily Show, and the political commentary by respected Pakistani publications and journalists was disregarded as well to serve a particular purpose and punchline.

Noah then focuses on how both politicians speak about corrupt and “crooked leaders.” In a state like Pakistan, where bribery is the norm, there is an actual issue with those in politics and the government being “crooked.” This affects the lower classes of Pakistan which make up the majority of the nation and the most marginalized groups as well. To speak bluntly about corruption as someone who is seeking office is to stand up against a system that has become synonymous with politics in the state since its inception. This disrupts the status quo and effectively concerns everyone who is currently in power or who benefits from systems of bribery. Trump’s comments on the other hand about corrupt politicians are to play into the fears and paranoia of Americans regarding liberalism and the left – a vehicle for the alt-right to justify its actions. Comparing Khan’s comments about “crooked” politicians to Trump’s is a false equivalency that again, can be defined as lazy journalism.

Furthermore, the fact that Noah believed that a comparison between Trump and Khan could be made is incredibly tone-deaf given that Khan’s ethnic group, the Pathans, have long been the targets of American foreign policy via drone strikes. American imperialism has directly affected not only his country, but his people and this is a substantial part of what his platform has been for years. To compare the two nations is a false equivalency, and to not recognize the role of American imperialism and how this has impacted Pakistan is frankly irresponsible for The Daily Show by extension.

For a show that is supposed to represent the truth and provide insight that’s missing from the majority of US media, Noah followed the very contemporaries he reprimands on his show as irresponsible reporting. Coverage like this has real consequences for real people – it acts as fake news as it spreads misinformation and confirms biases against Pakistan that have been present post 9/11. Furthermore, Pakistanis, like many groups in America, are currently facing backlash and discrimination from Trump’s policies. To have someone that many Pakistanis support referred to as similar to Trump, someone who has directly inflicted real harm upon their community, is a disturbing equivalency to make.

Khan isn’t perfect and there are genuine critiques to make about him and his party, but they need to be made in an informed and responsible way. Many Pakistanis have their concerns regarding Khan as prime minister and they’re able to bring informed commentary on these issues. However, why was this comparison between Khan and Trump made and what purpose did it serve? It seems that lazy journalism and punching down regarding both Pakistan and its new Prime Minister was easier than doing actual research for The Daily Show.

Khan symbolizes hope for so many Pakistanis after so long and it’s a shame The Daily Show couldn’t put the time or effort in to do informed and responsible reporting. Pakistanis expected more from Noah but it seems that even he succumbed to perpetuating tired and harmful tropes in order to deliver a punchline instead of a nuanced picture of Pakistan. Noah may have been laughing, but we certainly were not.

Manaal is a writer, artist, graphic designer and community organizer in Toronto. She writes primarily about issues pertaining to violence against women, Islamophobia, South Asia and race using the conceptual frameworks of anti-oppression, intersectional Feminism and Post-Colonial Theory.