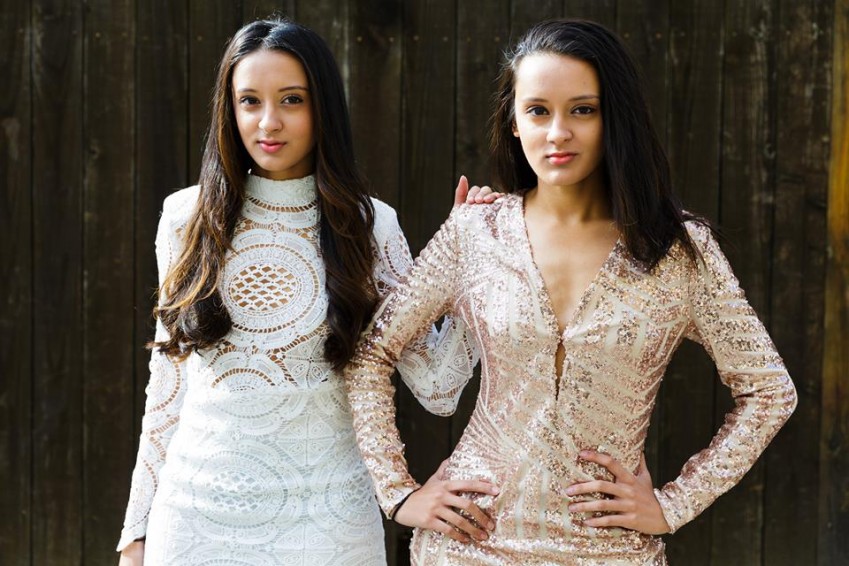 Last year, I discovered Poonam and Priyanka Shah’s “Ramta Jogi” choreography video on YouTube and became slightly addicted. Since then, I’ve kept in touch with the two and we’ve talked every now and then about their successes and all the new experiences in their lives. The classically bharatnatyam trained twin sisters are now moving into some unknown territory and working on new things.

Here’s what we found out about the talented and adorable twin sisters, Poonam and Priyanka Shah, as part of our “Fast Five Interview” series, which introduces budding artists/activists work to the Brown Girl community with short five-question Q&A interviews. If you haven’t already, check out their latest video first!

Hi Brown Girls! We really love the fresh, positive energy this magazine brings and are so excited to feature in it 🙂

1) What have you guys been up to this past year?

We both graduated from the University of Illinois in Urbana-Champaign in 2014 with degrees from the College of Business. After college ended, we weren’t ready to give up on our childhood passion of dancing, so we continued making more YouTube videos.
Last summer, we both got the opportunity to compete in Dance Plus, a dance reality show on Star Plus with Remo D’Souza as judge. We were noticed from our ‘Ramta Jogi’ video, and we went to Mumbai to compete! We made it to the top 45 acts out of hundreds of thousands, and it was an amazing experience! During Dance Plus, we were moved by the level of talent in Mumbai and decided to come to Los Angeles to learn Hip Hop dance styles. All of our favorite choreographers are here, and the positive energy/ level of talent here is truly inspiring! We have been in LA for two and a half months so far, and we love it.

It’s actually very surreal watching your video get five million hits in a week, and be shared by numerous publications and artists. We did not expect our Facebook video to go viral at all, let alone be shared by one of our favorite artists, Chris Brown! We literally just heard a cool mix by one of our friends, Dr. Srimix, and decided to make a short dance video to it. We make content because we love to create, and we suppose this one happened to go viral because the concept was so new and fresh! We’ll take it!

The Legacy Intro (Dr.Srimix & Klasikhz)When you combine Bharatnatyam fusion with your daily hip hop exercises! Mostly because this mix was too amazing not to, Dr. Srimix & Klasikhz 🙂 #talentedDJfriends #lifeSoundtrack from Legacy on Broad’s intro: https://soundcloud.com/legacyonbroad/the-legacy-intro-dr-srimix-klasikhz

3) What’s been the hardest/most surprising thing about putting yourselves on YouTube/Facebook for everyone to see and criticize?

The hardest thing about putting a video up, for us, is the permanence of that video. We are perfectionists, so we always think we could have done something better. As for our viewers and subscribers, they always say such wonderful, encouraging things and our feedback is overwhelmingly positive. The one debate our viewers did get into in our last video was evolving Bharatnatyam as a dance form; whether it should be kept the same or fused with other styles. Fusion is very much our dance genre, and we try our hardest the retain the authenticity of each dance when we do fuse styles. Most of our viewers love it 🙂

4) So what are your plans right now?

Right now, we are still in LA learning and growing as dancers. We are going to continue putting up content, focusing on our YouTube channel and doing what we do!

5) What can we expect from you guys as far as YouTube is concerned in the next few months?

As far as YouTube is concerned, you can expect more videos coming your way! We’re going to put up more regular content, and hopefully we can keep inspiring and surprising y’all 🙂 That’s all we aim for!