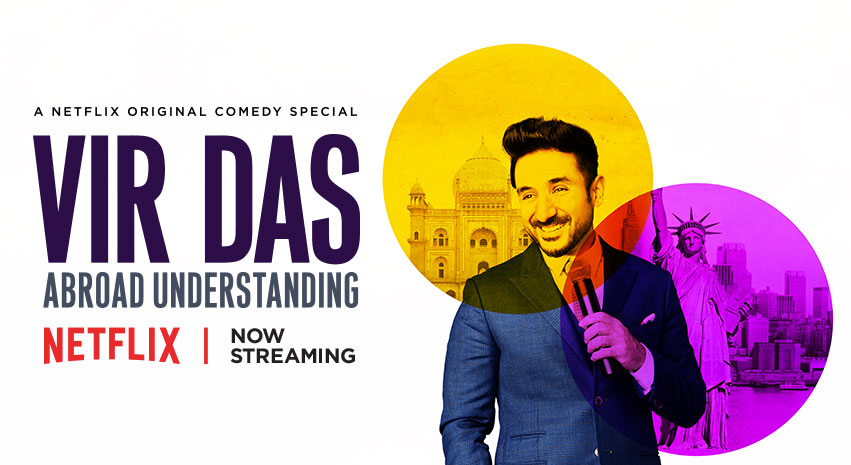 For most people, the words “Indian comedian” conjure up images of one of three people: Aziz Ansari, Mindy Kaling or Russell Peters. While all three are great, they represent the Western world — none of them were actually born or brought up in India, and only one (Peters) explicitly flexes his Desi heritage in his comedy. Now, thanks to Vir Das and Netflix, a country of 1.3 billion people is finally getting homegrown talent to represent them at the comedy table.

“Abroad Understanding” opens with Vir Das strumming a guitar. The camera swirls as Das strikes the chords, singing his thesis to two separate audiences in Delhi and New York that will appear throughout the special: this will be a cross-cultural show with jokes about real issues, not stereotypes. In fact, he addresses the typical Indian comedy beats head on, poking fun at his accent before asking audiences to consider the sound of his voice as “a perspective not a punchline.” It’s the perfect set-up to the hour-long special that simultaneously presents light-hearted and profound examinations of life itself, Desi or not.

In the first ever Indian Netflix original, Das talks about things he doesn’t understand from gun violence to American cereal aisles. The Indian-born-Africa-raised comedian isn’t afraid to broach topics and start conversations about complicated world events. He’s hilarious and heartfelt, sharing anecdotes and observations about the state of things in 2017, both in the United States and in India. But he’s also straight to the point, steering away from sugarcoating and instead favoring realness. In the current political climate, this special has exactly what we need: smart, informative and inquisitive discourse from an outsider’s perspective.

My favorite part about the comedy genre is that it’s a trojan horse. Tucked inside of well-crafted and perfectly timed jokes are deep, emotional, and thought-provoking statements about society. Das goes there with his sets on everything from patriotism to heartbreak to religion.

In a segment on racism, he spins a beautiful story about the impact of intent — that racism only exists when there is malice behind the words, that it doesn’t inherently live within the confines of language. It’s a conversation that isn’t had often and is rarely brought up given the clingfilm of political correctness that hangs over all of us, but it’s important to consider and contemplate. The best kind of comedy leaves us with both new ideas and cheeks that hurt from smiling too much, and “Abroad Understanding” does exactly that.

The style of his comedy and charisma is what carries the show. Das is truly a relatable presence on stage (and on screen), and his knack for drawing parallels between world events and culture at large allows audiences of all backgrounds to find their way into this comedy special, even if they’ve never heard of him before.

For example, after briefly explaining that this show will not make head bobble or accent jokes, thank you very much, Das launches into a set that compares the election of Donald Trump to an arranged marriage. And frankly, it’s genius. Embedding what is normally a stereotypically brown topic into timely world news brings the Indian perspective to the forefront, and it’s key to showing that Desi comedy is global comedy.

As Netflix continues to expand its offerings, it’s promising that Indian content creators are being approached and included. Gaining visibility is a key step in equal representation — from “Brown Nation” to “Abroad Understanding,” we’re finally getting to tell our stories to mass audiences by way of the global streaming giant. We can only hope that this trend continues, but at least it feels like we’re making strides in the right direction.