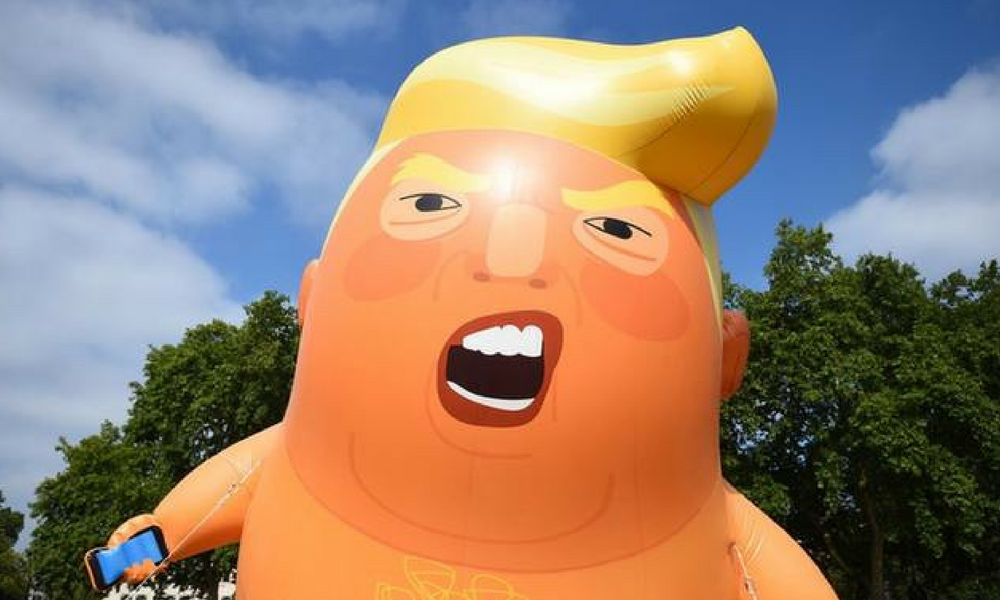 Aside from U.K. basking in the heat wave, in what has been one of the country’s hottest July in years, temperatures also flared amongst the British public as U.S. President Donald Trump touched down on British soil a few weeks ago. Was the country’s outburst to his visit justified? Brown Girl’s Magazine’s Safeera Sarjoo and Clare Ruel tell us their views.

After landing in the U.K. for a four-day visit to discuss the two countries’ relationship with the Queen and Prime Minister, Trump was confronted with a mass protest of around 2,000 people in Parliament Square.

London Mayor, Sadiq Khan spoke out in opposition to Trump’s visit. And in support of the peaceful protest, he pre-approved a request to fly a 20-foot blimp that depicted the President as an orange-hued angry baby, after 16,000 protesters signed a petition for it to be erected. But was the blimp a step too far? Was it justified?

Given that Trump has outwardly said that the protest made him feel ‘unwelcome’ and subsequently decided to conduct the remainder of his visit out of London demonstrates some indication of how the entire thing made him feel.

Was Khan unprofessional for approving the blimp? Was it right for him to bring his personal opinion of the President into the workspace and public arena? Maybe yes.

Ahead of his visit, Trump blamed Khan for a rise in immigration suggesting that it had brought crime into the country and implied that Khan did a “terrible job” after the London terror attacks last year. Khan responded by saying that this comment was unfair. But it seems there’s a long-running feud between the two of them.

As it stands, the situation is a bit of a mess. Should they both settle their differences by agreeing to disagree? It’s safe to say that in many places of work this behaviour wouldn’t be accepted.

And whilst some of the British public believe that Trump should be ‘vilified’ in light of some of his political decisions, some have also said that that the blimp was both a disgrace to the nation and a waste of money on hot air.

However the battle isn’t over yet, as America is in a similar position to that of the U.K. vying for national sovereignty, it would be very, very wise to keep conflict to a minimum as the U.S. are indeed our ally.

I don’t think we should have welcomed Trump with a visit that involved a meeting with the Queen. With everything happening in the USA surrounding the issue of immigration, children being separated from their families and the Muslim ban, our government should be showing that we are firmly against these events.

This is why I think the baby Trump balloon at the protest was justified. A normal march wasn’t enough for this visit. There needed to be something else that would send a message to him. Sadiq Khan may be under scrutiny for allowing baby Trump to fly, but if we’re going to split hairs over this then should we be policing every sign and statement that people carry with them in protests? Trump’s comments about Khan were also unfair and considering there have been mass shootings in America, he could do with focusing on curbing gun violence in schools.

There was such a clear divide between what the government wanted and what the people wanted, even after a petition gained over 200,000 signatures against his state visit practically got ignored by Theresa May. This was our way of making our feelings heard and clear.