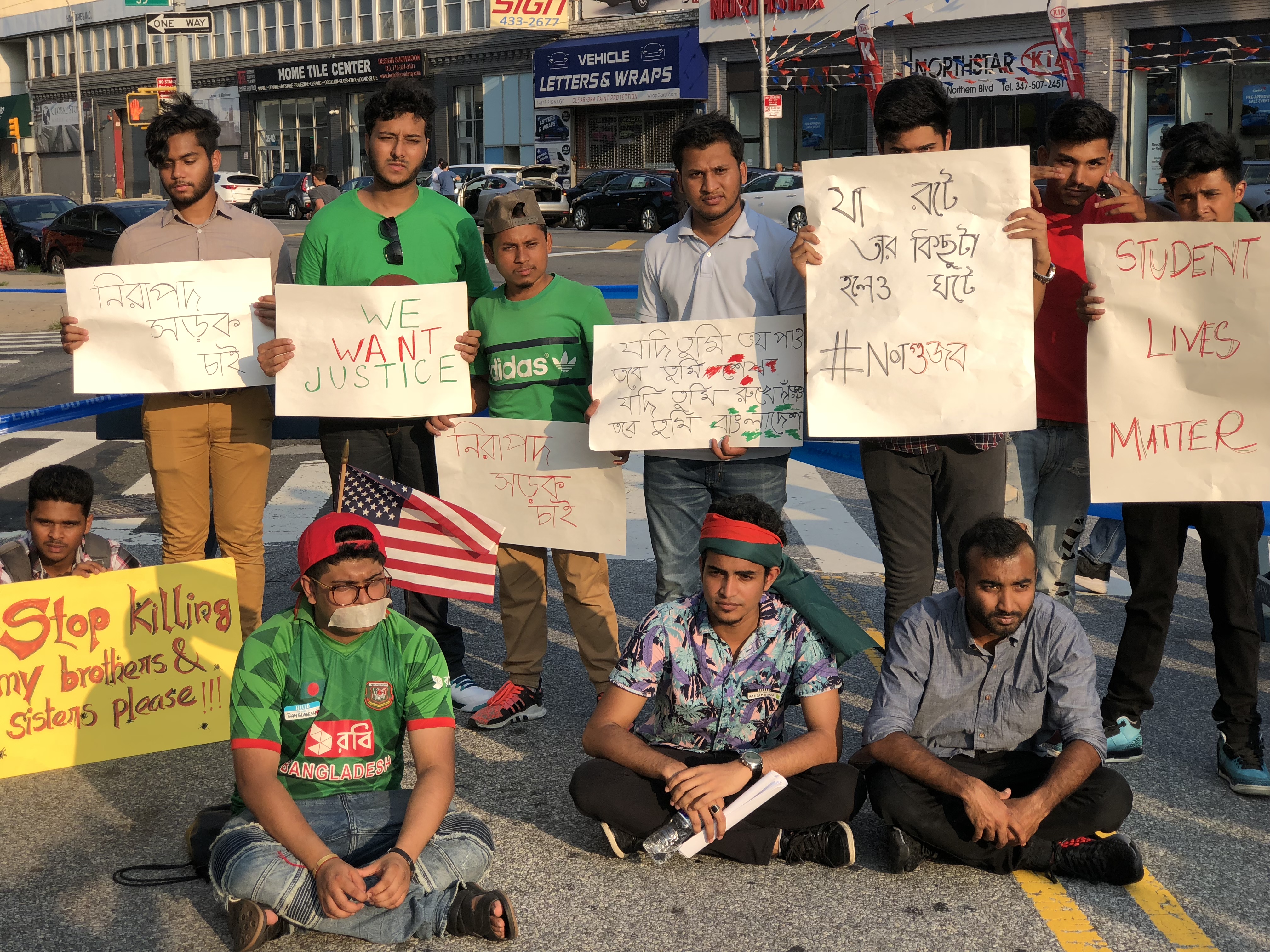 Tens of thousands of high school and college students in Bangladesh were checking licenses and registrations of every driver on the streets. They stood in line formations to create an emergency lane for ambulances and people in need to pass through. Standing in the heat and rain, students made sure no vehicle was on the wrong side of the road. They demanded the government to finally after years of pedestrian deaths and road accidents to pass transportation reform. Parents and the media were in full support. From abroad, the Bengali diaspora watched on Facebook in awe. The protests were a display of what the youth population can do. The change we can create. It was peaceful and beautiful.

Until it wasn’t. Until the police started using tear gas and rubber bullets on the students. Until a pro-government group started beating the students and journalists. Until it became violent and ugly.

Adults with knives, sticks and bats charged toward unarmed students sending dozens of students to the hospital severely injured. Girls were molested. Witnesses have claimed that four girls were raped. Police officers arrested and threw tear gas on university students across multiple campuses, many of these students were not even active protestors.

The Bangladesh government and police officers denied their involvement in the violence. The government has instead said that the opposing political party, Bangladesh Nationalist Party, is manipulating student anger to take down the current administration. Students, however, have identified the main suspect for leading the attacks as the Bangladesh Chhatra League, a student organization linked to the ruling Awami League party.

Sign the petition for Bangladeshi students to receive justice via Change.org HERE

Yes, you’re reading all of this correctly. In response to students asking for nothing more than road safety, students who had no weapons on them, students who never harmed anyone, students who were peacefully protesting, government-affiliated authorities and organizations attacked them. Don’t try to come up with a justification for the violence, there is none.

The protests started on July 29 after a high-speed bus operated by an unlicensed driver ran over two teenagers, Diya Khanam Mim and Abdul Karim Rajib. Bangladesh is notorious for having a corrupt and unregulated transport sector making it easy for unlicensed drivers and unregistered vehicles to be on the road. Thousands of people on average die each year in road accidents due to faulty vehicles, reckless driving and the negligence on the part of officials to enforce traffic laws. According to the National Committee to Protect Shipping, Roads and Railways, more than 4,200 pedestrians were killed in road accidents last year, a 25 percent increase from 2016.

In spite of the recent attacks, the students braved the frontline continuing not just their fight for safer roads but also their freedom. A nation that poses as being democratic, a country that fought for its independence and was built by rebels couldn’t allow students to assemble for transportation reform. Internet speeds were brought down and social media sites were threatened to be blocked in an effort to censor the news of the violence. But the news spread. In an election year, dissent is undesirable to the ruling party and wanted by the opposition because at the end of the day it’s always about sustaining power, not about the innocent students who are trying to pave a better Bangladesh.

UN agencies are increasingly concerned for the safety of children & young people caught up in recent protests over road safety in #Dhaka & other parts of the country.

Below are the 9-point demands issued by the students:

1. Reckless drivers should receive capital punishment and provision for such punishment should be incorporated into the Constitution
2. Shipping minister Shajahan Khan must withdraw his statement and apologize to students.
3. Construction of a foot overbridge or alternative arrangement to ensure students’ movement at the spot of Sunday’s incident, construction must start within seven days.
4. Setting up speed breakers on accident-prone roads.
5. The government has to take responsibility for the students killed or injured in road accidents.
6. All intra-city buses must stop and pickup students when they ask.
7. Students should be allowed to pay discounted fares in every part of the country including Dhaka.
8. Vehicles must not be allowed on the streets without fitness certificates and drivers must not drive licenses and updated paperwork.
9. No bus can take excess passengers.

The requests above are logical and to think it’s met with such resistance is beyond our understanding. However, as of Monday, August 6, Prime Minister Sheikh Hasina said her political rivals were using the protests to stir public anger against the government ahead of a general election in December. Since then Hasina has urged students to go home, saying “Whatever they’ve done is enough.” In an attempt to address concerns raised by students, Bangladesh’s cabinet approved new road safety regulations, which includes punishing some traffic accident fatalities by death, five years’ imprisonment and a monetary fine for reckless driving. The Road Transport Act 2018 must now go before parliament for final approval.