The following post is Sravya Tadepalli’s cover letter that she submitted when she first applied to become a writer at Brown Girl Magazine. The staff loved it so much because it beautifully explains exactly why a publication like ours needs to exist, so we decided we would share it.

My name is Sravya Tadepalli and I am a sophomore at the University of Oregon majoring in political science and journalism.

As I write this letter now, I notice the little red squiggly lines that appear under my “misspelled” name and I can’t help but think about how this perfectly exemplifies the way society continues to devalue minority/immigrant experiences. Just as our South Asian names are often considered foreign and non-existent, the South Asian community, amongst other immigrant communities, is often treated as such by the media, politicians, and (strangely) software companies.

Brown Girl gives South Asian Americans the opportunity to challenge the mainstream narrative about people like us and allow South Asian women to tell their own stories.

I grew up in an area with very few South Asian Americans, and I am excited to write about the experience because it’s different from the rest. Most of the current writers for the magazine are from California, Texas and New York/New Jersey, where there is a significantly larger South Asian American population, and the South Asian experience in such regions is quite different.

While some of my cousins grew up in areas where they had six, seven, or even more Indian friends growing up, I grew up with two Indian friends, one who eventually moved during the recession. My town was a small, semi-rural town in Oregon where most people thought I was Native American—not Indian-Indian. I was shoved into an ESL class, called “Sacagawea” on my school bus, and pretended to be the daughter of Russian chicken farmers (looong story). But where there were challenges, there was also humor, love, friends, family, strength, courage, and a beautiful, thriving community that helped me experience a deep and fulfilling childhood.  I hope my stories resonate with young women who grew up in places like I did.

As a political science major and passionate public policy enthusiast, I also plan to write about political issues, from foreign policy to domestic policy to social justice. I competed in speech and debate in high school and placed second at the USA World Schools Debate National Championship in 2015 as a member of the South Oregon team. I also worked as an intern for Sara Gelser’s Campaign for State Senate in 2014.

I think it’s really important that members of the South Asian American community recognize the importance of politics in our daily lives and act in accordance with their convictions. From the recent controversy surrounding the acquittal of the officer who assaulted Sureshbhai Patel to drone strikes in Pakistan, the South Asian community has a stake in the policy decisions of our leaders, and it is important for young South Asian Americans to debate and deal with these issues.

I love discussion, debate, and writing, and I’m so excited to be contributing to Brown Girl and being a part of this wonderful community! 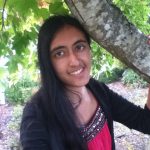 Sravya Tadepalli is a student at the University of Oregon studying political science and journalism. She is a proud Indian-Oregonian and grew up in a small town in the southern Willamette Valley known for its beautiful green forests and strikingly white populace. Sravya is passionate about theater, racial issues, and politics and is particularly interested in figuring out policy solutions to problems of social injustice and political partisanship. She has also recently written a play about Indian-American Governor Nikki Haley that will be produced next spring at the U of O.