On March 16, 2016, President Obama announced his nominee for the Supreme Court of the United States: Merrick B. Garland, Chief Judge of the D.C. Circuit Court of Appeals. And yet, I found myself disappointed that the nominee was not Sri Srinivasan.

Undoubtedly, Judge Garland is qualified for the job; 19 years on a federal court of appeals, with years of government service before that. Given the current political climate, Garland is also a strategic choice; Republicans in Congress have consistently praised him, and it would be difficult to sustain a blanket “no consideration” policy for a candidate widely considered to be “centrist.”

As one of the contenders that appeared on almost every short list, there’s no question that Srinivasan was supremely (no pun intended) qualified. He served as a law clerk to Justice Sandra Day O’Connor, argued many cases before the Supreme Court, is currently a judge on the D.C. Circuit (confirmed by the Senate with a 97-0 vote), and like Garland, is considered “moderate” or “centrist.” Furthermore, as a relatively new nominee, he likely would have had a significant impact on the court’s jurisprudence in the coming decades.

As discussed in the past few weeks, Srinivasan’s nomination would have been momentous for several reasons:

Some have also pointed out the legal significance of such an appointment, given the past policies and restrictions on Asian immigration and citizenship.

But as an Asian-American law student, Srinivasan’s potential nomination carried a different meaning for me. While many of the formalistic legal barriers to Asian and Asian-American inclusion in society have been removed, several social, intangible obstacles and stereotypes remain. One of the common stereotypes characterizes Asians and Asian-Americans as “perpetual foreigners”.

This concept underlies the “no, where are you really from?” line of inquiry and rests on the notion that people of Asian origin fall just short of “American”. Perhaps this perception stems from Asians’ connections to their countries of origin, or perhaps it is a contemporary manifestation of the historical exoticism surrounding “the East”. Furthermore, despite being an integral part of America’s history of exclusion and prejudice, Asian-Americans are sidelined in our national conversation on race, cementing the perception that we are somehow a detached, apathetic minority loosely woven into the fabric of American society.

The perpetual foreigner stereotype is especially powerful in the legal field. Legal practice, particularly in government service, requires an understanding of the philosophical tenets underlying the legal system, of the historical context in which our system took shape and an awareness of how the law governs relationships between individuals and the state. Given these prerequisites, being perceived as a foreigner or outsider may present Asian-Americans with additional hurdles to “prove” their American-ness and to demonstrate that they are capable of meaningful participation in American politics and governance.  (See former Governor Bobby Jindal and Governor Nikki Haley).

As Asian-Americans, it is extremely frustrating to grapple with these presumptions in spite of our embodiment of American identity.  We share a sense of responsibility in America’s future. We are not a disinterested minority; we do not see the destiny of the nation as separate from our own. We care, and we are capable of the same commitment and participation as any other American- whether in legislatures, at the voting booth, or on the bench.

The Obama administration has made remarkable progress in appointing Asian-Americans to prominent government positions. Neal Katyal, Jacqueline Nguyen, Jenny Yang, Vijay Murthy, Vanita Gupta, and Sri Srinivasan himself are all examples. However, the Supreme Court is a unique institution, and Asian-American representation there carries its value and significance. The Supreme Court synthesizes our historical past and distils its principles to resolve the current questions of rights, liberties, and justice in our nation. In recent times, the Supreme Court has taken an especially active role in protecting and extending rights to groups that have historically been discriminated against. After Srinivasan’s nomination, it would no longer be unimaginable that an Asian-American, even one born outside the U.S., could participate in an institution such as the Supreme Court. It would finally be conceivable that a group so undeniably present in America’s past could participate in shaping its future.

In an election cycle where a major party’s leading candidate has questioned the extent to which minorities and immigrants enrich our nation, Srinivasan’s nomination would have reaffirmed the belief that the country we as Asian-Americans consider our own also trusts us with the great responsibility of shaping the future of America- our country. 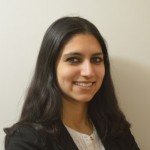 Jonaki Singh is from Queens, New York. Born in Oklahoma, and spending part of her childhood in Texas, she is continually intrigued by the relationship between peoples, places, and their shared political histories. She holds a B.A. in English from St. John’s University and is completing her second year at New York University School of Law. She is currently researching Asian-American participation in government and politics. In her spare time, Jonaki enjoys theater, reading political biographies, cooking, and organizing Indian cultural events within her community. Follow her on Twitter or Instagram.