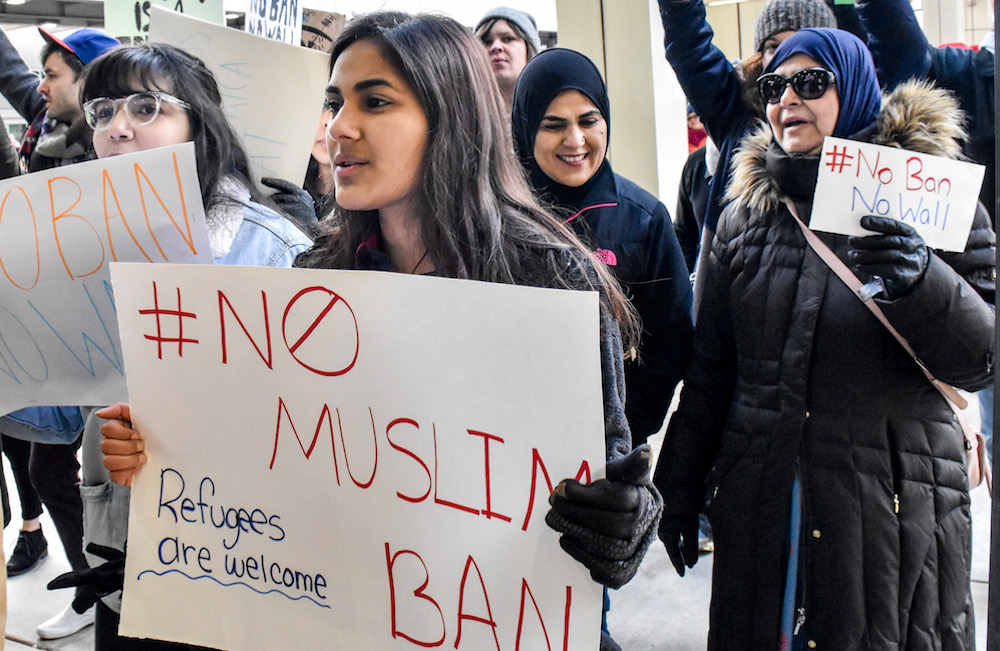 When I first read the news that the U.S. Supreme Court ruled in a 5-to-4 vote to uphold President Donald Trump’s travel ban on immigration from certain Muslim-majority countries, I was reminded of an incident from high school. The day after Osama Bin Laden was killed, a friend came up to me to offer his condolences. I was taken aback. I am a brown male, yes. I had facial hair, yes. However, I’m not Muslim. I don’t come from a Muslim family.

But as we know so well, those who promulgate Islamophobia and racism don’t stop to fact-check themselves.

They don’t care about the context of my identity – only their views of it. The decision is more than a ban; it’s a validation of this type of harmful, post-9/11 ideology. It’s harmful to the entire South Asian diaspora, regardless of religious affiliation.

But sadly, only four justices are able, or willing, to see the far-reaching implications of this decision. In the dissenting opinion, Justice Sonia Sotomayor, who vehemently decried the decision states that while overturning Korematsu v. United States was “long overdue,” the decision to uphold the ban on immigration from certain Muslim-majority countries still utilized the same “dangerous logic” deployed in the Korematsu case, and  “merely replaces one gravely wrong decision with another.”

The sentiment among Muslims and the South Asian community is largely in agreement with her. Today, many are still reeling from the shocking blow. Here’s what some in the community have to say about the SCOTUS decision.

The Community on the ‘Muslim Ban’

“I’m not surprised. The ban is not “un-American,” it’s what we should have expected from America. Though the ban goes against American values, America’s deeply engraved history of oppression and political greed has far strayed away from equality and justice.

As a Muslim-American who has the privilege of possessing a U.S. passport, I feel a harrowing sadness. But this ban is not an attack on Muslim-Americans who keep attempting to ensure their inclusivity as a “true American.” It’s about refugees and immigrants fleeing from unemployment, war and unlivable conditions in countries which are in this state because of U.S. bombs and intervention.

The Muslim ban isn’t an act of racism, it’s an act of pure evil against human nature.

“There is no message for SCOTUS and proponents of the ban; they know what they’re doing, and they don’t care. However, as a nation, people with common sense will do everything in their power to fight against systematic oppression – and we’ll win.

“I don’t know what to think. Trump claims that this will ‘secure our borders,’ but who exactly are we protecting ourselves from?

When I check the record, white men are responsible for the majority of mass shootings in this country.

Oh, wait, let’s not forget they’re always ‘mentally ill,’ so it’s not an act of terrorism to go shoot up a school. Or when the police shoot unarmed citizens they’re just doing their job, right? No need to ban the police!

Let me say one thing in all seriousness: The Supreme Court decision to uphold the ban is a new low for the American people. We need to shift our mindsets and understand the implications of these decisions in the grand scheme. As a people, we need to fight for the rights of ALL, because sooner or later, it’ll be you or I who loses our freedom.”

[READ RELATED: Meet the 24 South Asian-Americans Vying for a Seat in Congress]

“Though this ban does not directly affect my family or me, I do have friends who practice Islam. I could write an account of why Muslims flee their homelands to seek asylum, tell you about the contributions that Muslims have made to our Western society, or tell you some extraordinary migrant tale about a Muslim family that achieved the American dream.

I won’t, because the United States is not a meritocracy and our human rights are not contingent on some arbitrary means of assimilation.

Fundamental human rights should not be rescinded because of your faith.

All this ban does is set the tone and rhetoric in America that those who practice the religion of Islam are unwelcome. All in the name of what, security? Every religion has its extremists, but those are the outliers, not the majority. Barring a whole group of people based on their religious practice is not only unjust but inhumane.”

“Research the history of American foreign policy in the seven banned countries: Syria, Somalia, Iran, Libya, Yemen, North Korea and Venezuela. You will understand why this travel ban is so ugly.

A cycle of either directly or indirectly destroying these countries, a cycle of dehumanization, a cycle of viciousness so carefully masqueraded as concerns for freedom and human rights.

When innocent people want no part in this cycle, when they want to live normal lives and have opportunities like all other people in this world, they are instead told they are the enemy and banned.

I hope these countries, rich with their own history and civilization, full of people who are just as human as you and I, can experience some peace so that their people are not forced to rely on the ugliness of this country to so graciously grant them their humanity.”

“The decision is disheartening but also an eye-opening one, in that it served as an example for the far-reaching consequences of elections. Trump’s election presented him with the opportunity to appoint a Supreme Court Justice, and thereby, shift the balance of the Court and influence decisions for years to come.

As someone currently working in an urban public school system, this decision worries me about the future of many of my students and their families who come from a variety of backgrounds.

Now that it’s 2018 and we have the midterm elections coming up this November, the most important thing we can go out and do is vote! Again, elections have consequences and we have to somehow right the wrong that has been done. Go vote, and who you vote for matters!”

[READ RELATED: Protecting and Practicing the First Amendment in the Desi Community: A Reflection]

“The ban was proposed by someone with an extensive and detailed history of bigotry and bias. I am not comfortable. This is no longer a document that can be held up to the Constitution on its own, it must be tied to the actions and stated intent of the individual who proposed it.

When our president has repeatedly cried ‘Muslim ban,’ I am hard pressed to believe that this decision is really neutral, rather than pretty language meant to fool us into believing it changed.

As former President George W. Bush once said, ‘Fool me once… Shame on… Shame on you. Fool me, you can’t get fooled again.’

“I should wake up any minute from the nightmare this country is turning into, I tell myself, but rather it just continues. America does not deserve a ‘leader’ who lives on social media and has been privileged his whole life. The steps he’s been taking thus far are not only irrational but also directly violate many rights of the American citizens, which he is (apparently) protecting.

It is apparent that he is aiming at a certain audience, who not only feed into his nonsense, but are ready to start havoc in the country I’ve called home for more than 20 years.

My message to SCOTUS is: Take a look at our history and what America stands for. More importantly, take a look at the 1994 Korematsu v. United States case and ensure that a secret agenda isn’t being pushed by the POTUS.”

[READ RELATED: My 9/11 Story: The Land of the Perfect Pancake]

“I’m scared. I’m scared of having to fight hate again. I’m scared of seeing loved ones suffer. I’m scared of feeling unsafe in my home, my America. One of my best friends is Iranian. Her family, especially her grandparents, are the most important thing to her. Her grandmother resides in Iran and is the sweetest soul I’ve ever met. My heart breaks for her family and the possibility of potentially never meeting her grandmother again. An America that can rip families apart is not the America I love. We are a country built on promise of a better future, acceptance, and endless opportunities. This all seems to feel like a lie now.

“As a first-generation American and a proud child of immigrants, the disappointment I have with my country continues to grow.

This decision has re-endorsed a hateful America that we had only recently started overturning.

“I grew up in the post 9/11 era in New Jersey. I saw friends and families of religious and cultural minorities become the victims of hate crimes, only because they prayed to another God.

I see us falling back to those dark times. Trump’s agenda is based on hate, and there is no denying it. For the first time, the country I was once so proud to call my home is on the wrong side of history.”