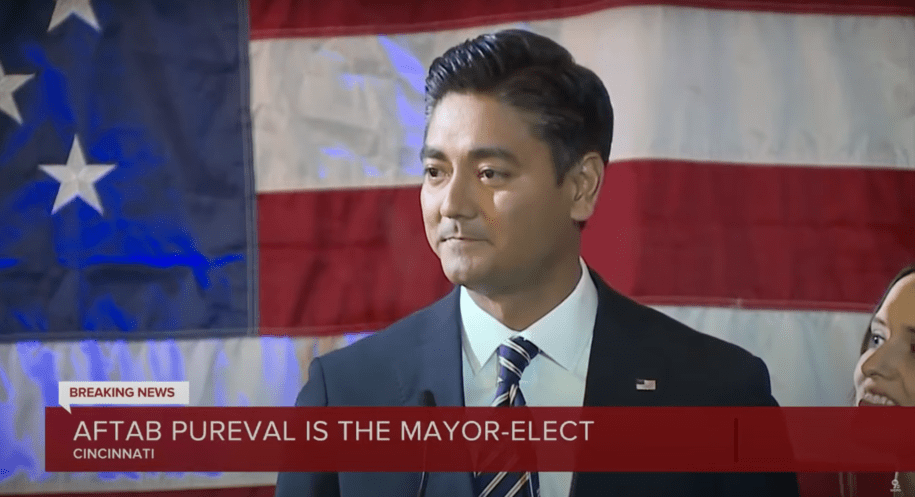 The trend of firsts from the last election continues: People of color are making historic wins nationwide, and by a significant margin. Securing more than 66% of the vote, Aftab Pureval was elected as Cincinnati’s mayor Tuesday. His win makes history as the first Asian American Pacific Islander (AAPI) to be elected the city’s mayor. According to the Cincinnati Enquirer, he is also the only AAPI mayor in the midwest.

“Tonight, we made history in Cincinnati,” Pureval told supporters, according to the Associated Press. “Cincinnati is a place where no matter what you look like, where you’re from, or how much money you have, if you come here and work hard you can achieve your dreams.”

Pureval, who is of South Asian Indian and Tibetan descent, defeated former congressman David Mann, who had served as the city’s mayor for nearly eight years. Mann took the defeat well and even congratulated Pureval.

“Congratulations to Aftab on his well-deserved victory. I have spoken with him and wish him nothing but the best, and it has been the honor of my lifetime to serve this community as a councilman, mayor, and member of congress throughout my career. Thank you, Cincinnati!” Mann tweeted Tuesday night.

Pureval formerly served as Hamilton County clerk of courts and campaigned with the promise to bring new ideas to city hall. He told the AP that when he decided to run for county clerk, many colleagues and fellow Democrats warned him that he did not have a “good ballot name.”

“When you see A-f-t-a-b on a yard sign, it doesn’t occur to people that’s a candidate not an insurance company,” Pureval said. “When you’re Asian, when you have an ethnic name, it’s just harder. You’ve got to be creative, you’ve got to work harder, you’ve got to knock on more doors.”

Words can’t express how honored and excited I am to be the next Mayor of Cincinnati. Tonight, we made history! Let’s get to work! https://t.co/GGoBQbZS5U

During his victory speech at Lucius Q in Pendleton, he stood by his mother and brother and told the crowd of his family’s journey to “to a place called Ohio” from New Delhi, in hopes of a better life.

“What on earth were they thinking?” he said, referring to his parents. “They came to this country to provide a better life for their sons. Because of that incredible decision, our family went from being refugees to mayor of Cincinnati.”

Pureval’s historic win is not a one-off—it comes during a time when another Asian American has just made history for being the first Asian American elected as mayor of Boston.

According to the Associated Press, Councilor Michelle Wu became the first Asian, first woman, and first person of color to be elected as mayor of Boston. Although she follows Mayor Kim Janey, who is Black, Wu is the first to be elected; Janey was actually appointed mayor after the previous office holder, Marty Walsh, accepted a slot in the Biden administration.