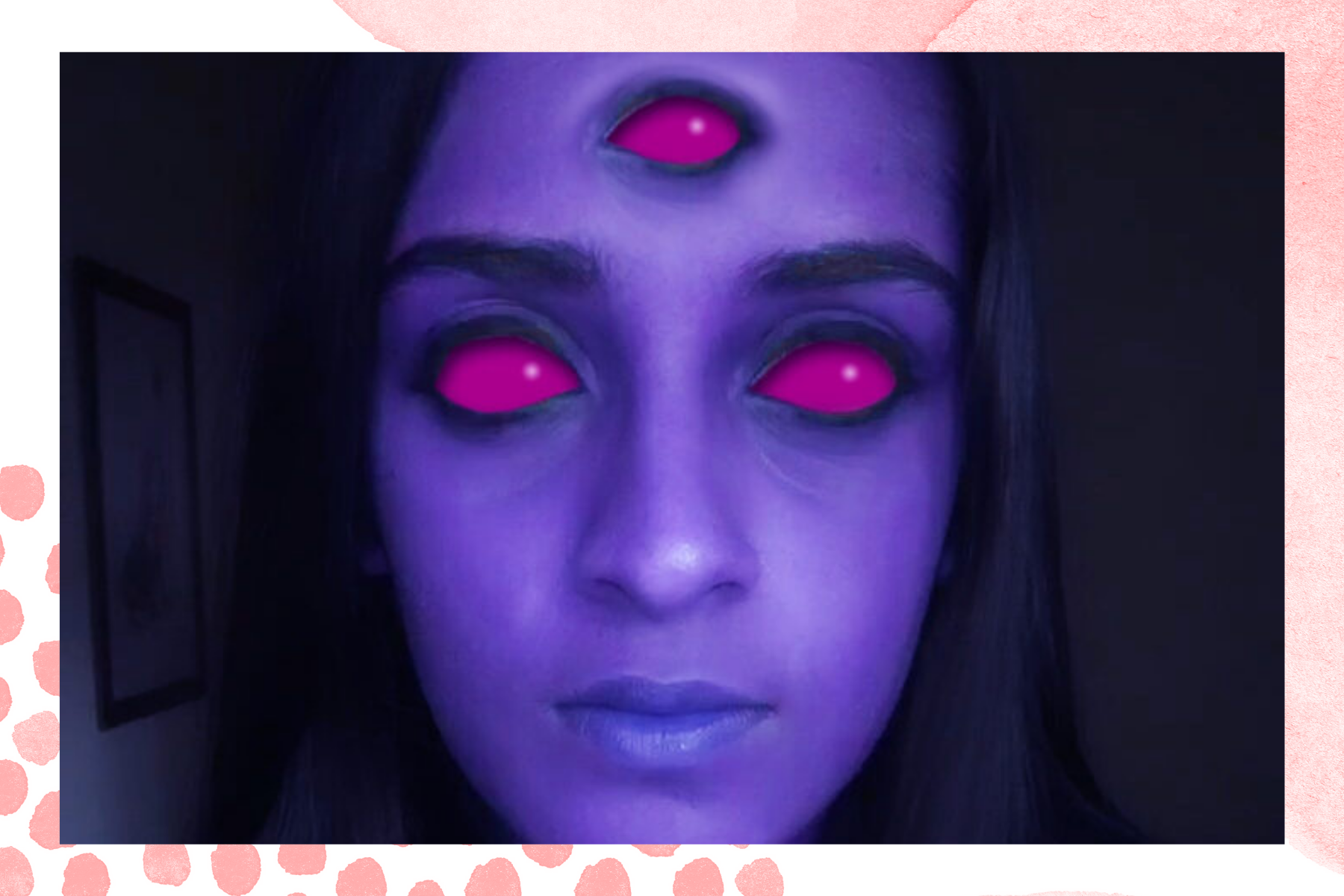 Interview by saahil m. and curation by Viren Shinde.

For this month’s artivist feature, Brown boy spoke with Sam Madhu, a self-identified “Jack of all trades, master of none” artist who borrows visual elements from Hindu mythologies and reimagines them in cyberpunk worlds.

Drawing from the legacy of Afrofuturism, Sam initially categorized her collection of work under the label of #Indofuturism. Scroll through to trace her journey of growth towards becoming India’s leading dystopian artist.

I think the entire world has been constructed in the image of a white man.

Everything we know is because of white-male-patriarchy. It’s just been controlling everything for so long. Futurism—for people of color—and all of the cyberpunk is so white and male-oriented. So Afrofuturism is a big, huge deal for someone like me.

Unfortunately, because of white, male patriarchy, we do have these boundaries in South Asia.

Here in India, It’s a very difficult thing to be born as a middle or lower-middle class, or poor person. Your life is a constant struggle. It’s waiting in line for a system—a queue—that is endless. India is now a major economic power. But if you actually look at the people, there is poverty everywhere. So it’s such a paradox.

I’m not able to make an accurate prediction about Pakistan. I don’t know what’s going to happen. I did go to this—I went to the border—and they had this flag ceremony between India and Pakistan and like, yeah, it was cool. I mean, it’s just cool to see. Each side was screaming. Indians were playing Bollywood music super loud and Pakistan was playing their music super loud. They were competing. So they’re both still similar, you know? But I don’t know much about Pakistan.

And it sucks. I have friends who have Pakistani parents who want to visit India and they can’t because of these crazy passport laws. These laws are archaic and they need to go. You have a mother who was born in Pakistan so because of that you can’t come to India…? It’s super crazy stuff.

Even me talking about this right now, it’s giving me a little anxiety because there are so many drastic changes happening in this country that…I don’t know.

It’s very unclear what will happen. I’m sorry if I didn’t answer your question perfectly.

It’s just, I’m also confused as to what the answers are. Because we’re going to a place where constant surveillance is a reality, and freedom of speech, as we know it…I don’t know how long that’s going to exist. It’s probably nearing its end. But I know that there’s a lot of people here who are super committed to saying exactly what they want. And that’s amazing.

I do think my work—especially my work showing the cityscapes with the giant gods and the giant figurines and governing statues—I think those are actually already happening in India. They are constructing these massive god statues and I think they will continue to do that as symbols of power and symbols of surveillance.

My work is dystopian, so far.

For it to actually come true is not the best thing, but I think it will come true. And I make that work because it’s not really a future everyone wants to see, but the images I make in a fantasy world could be something beautiful—but in reality, maybe they’re not. I think my work is super open to interpretation.

For me, dystopias are not necessarily negative. It’s just reality. We’re living in an overpopulated world where we have strong men trying to control governments.

That, to me, is reality. It’s not actually cynicism or pessimism.

Dystopia to me is more realistic than a utopia…if that makes sense.

People find happiness here in small things. A lot of people feel like they might have difficult lives, but they are just so used to it that they have this inner strength that is, I think, a sign of strength you can only find in countries like India. Just the strength to keep going and to keep fighting and to keep living another day.

I don’t think of my work as exclusive or having boundaries at all, because I don’t believe in those things. I think of myself more as—and I hate this [term], but—a global citizen. I’m just a little molecule. I don’t think of myself as a country or whatever. My work is making a shift from being very rooted in Indian-ism to more about living in the world and having some Indian elements. Before my work used to be about being in India. Now it’s not so much about that.

I think all of us are deconstructing just what it means to be a Hindu right now because there’s a lot of politics involved with it.

And that sucks because it has a lot of beautiful symbols, but there’s a lot of ugliness associated with history and the future. So in that sense, I completely understand that some of my work just might not be for a lot of Indians and that [response] is necessary.

All the symbols I use in my artwork, that look Indian or Hindu, are a direct product of nostalgia because I don’t see those things now…I see them in my memory, you know?

Like, everything I make is probably from something I remember. Because—even now, as India is more westernized—we see less and less of these traditional symbols. So definitely I think a lot of it comes from just past learning and nostalgia. I think I, and a lot of Indians when we look at Hinduism, see it as something to cherish from nostalgia because we grew up with all these symbols. But a lot of those symbols are painful to a lot of people who have been oppressed and whose families have been oppressed because of Hinduism.

With everything that’s happening here, such as with nationalism, I don’t want to be dependent on religion anymore to make my visuals. I’m trying to create a visual style that is not specifically Hindu, per se. But it’s difficult for me, too, because I’m in the process of discovering all these things. And I think a lot of Indian stuff is very psychedelic and looks psychedelic, and I think all of us have those genes we’ve inherited that have a certain kind of Kamasutra-type of psychedelic thing going on.

It’s easy to take a picture of a goddess and be like, “This is feminism.” But that’s the thing; it’s not anymore because a lot of Hinduism is rooted in casteism and a lot of symbols that we love and cherish could be harmful to other people. So I’m actually in the process of unlearning right now and trying to understand things that I probably never thought of before.

In the beginning, when I just took off and my work was on BuzzFeed and all those kinds of things, I thought then, Oh, I’m doing something different because it was all these kinds of younger women, like 18 to 24, that was really into the art. And they were like they were seeing it as symbols of Indian feminism and all those things, which back then made me feel like, Oh, this is empowering. But now, after spending time in India, I’m realizing there are so many layers to feminism here and empowerment. Mainstream Indian feminism has in many ways appropriated Dalit feminism. My entire perception of feminism has changed. And I don’t know if my work is empowering in that sense anymore.

Now my work is more about sci-fi, so in that sense, I don’t see too many Indian artists in the mainstream cyberpunk futuristic world. I think I am one of the few ones. So in that way, I feel good bringing my narrative to that genre. But in terms of empowerment and social activism stuff, I think my work is kind of taking a step back because I, myself—as an individual—am processing what empowerment even means now, because being in a country like this, where there are so many layers of discrimination, you have to really rethink those things.

I am someone who teaches myself a lot of different things, like video editing, VFX, Illustration, and 3D but I’m not a super master at any of them. I just like to spread my wings and have more knowledge rather than focus on one thing. I just kind of like to do everything! Yeah, so I consider myself like Jack of all trades, master of none, because of course all my work is digital, but it’s hard to classify myself as an illustrator or graphic designer.

All of us are creatives doing different things. ‘Project Asura’ is just all of us kind of coming together for projects. It’s just like a cloud studio, I like to call it. We become an agency when required, otherwise, we’re all living our lives. But if we get a project that needs all of us, we—kind of like the Power Rangers—come together.

Asura is a demon from South Indian mythology. So I just thought it would be cool to use that because I’m from South India. ‘Sur’ means ‘good,’ and ‘asur’ means ‘not good.’ But it doesn’t mean you have to be evil. It’s tricky because it’s like ‘Asura’—it’s not good or bad. It just what it is. You can be neutral but still have subjective views of different things. Because what is good-ness, right?