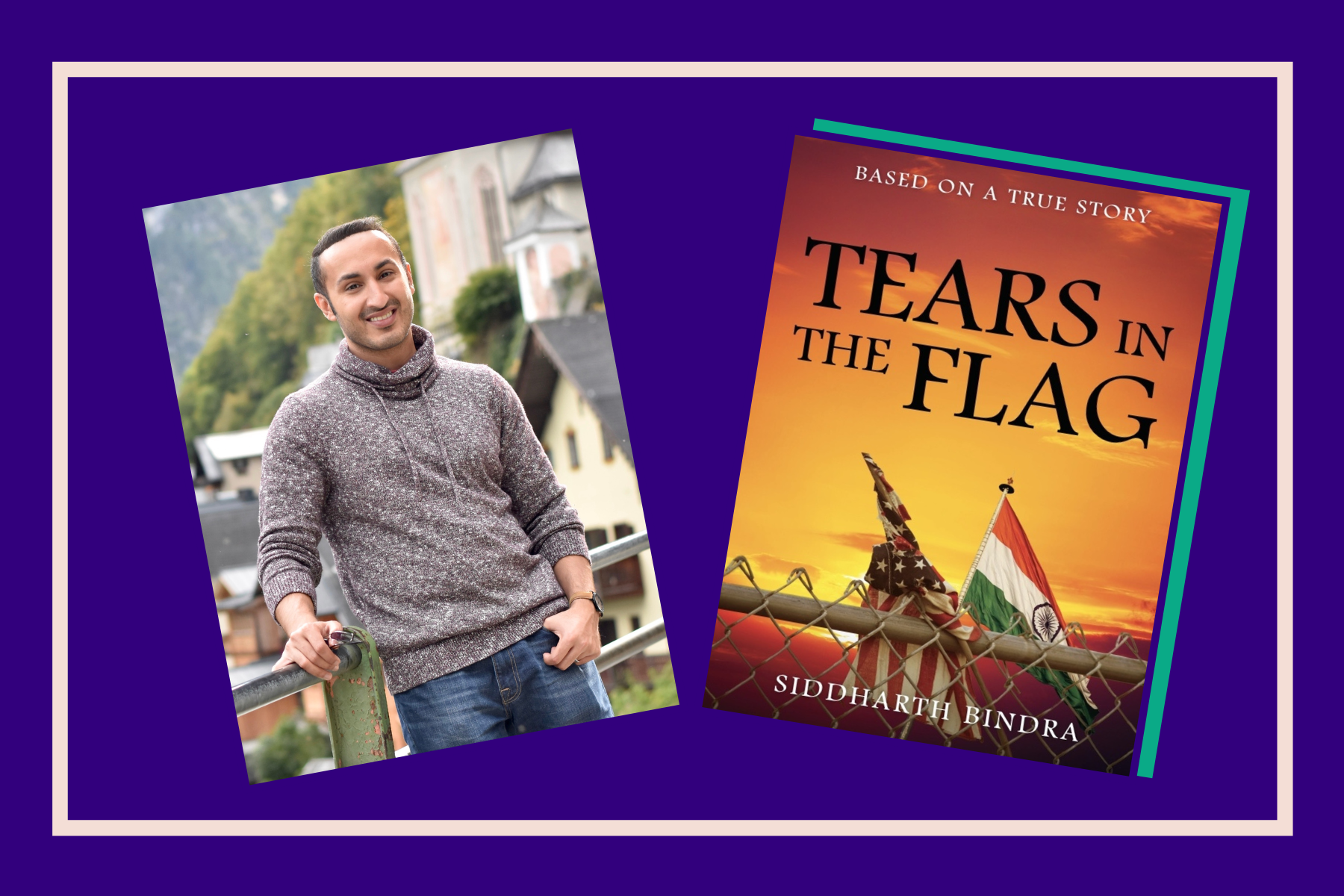 It was a cloudy and rather overcast day on the East coast that left me feeling pensive and calm. I settled into my favorite reading position and dived into a three-hour-long journey with a new book.

“Tears in the Flag” by Siddharth Bindra is based on a true story. In America, many people associate Indian Americans with the upper-middle if not upper-class of society. The ones who, with their hard work ethic, created opportunities with their education and brilliance, becoming top-paid CEOs, doctors and lawyers. What is not often talked about is the lost middle-class of Indian Americans — those that didn’t make it past the visa lottery or didn’t come to America with a five-year plan and sponsorship and generational wealth or privilege under their belt.

The novel is a testament to those immigrants. Arjun, the protagonist, is a young boy when his mother leaves his family to go back to India after immigration officers come knocking on their door. Many Indians who had migrated with no sponsorship were desperate for a green card — a piece of paper that identified them as legal on American soil, as close to being American before naturalization. Just a piece of paper.

I had heard of many families fabricating marriages and other false stories to procure a green card; to procure a safe future for their families. However, this very risky measure can easily backfire once investigated by the authorities. Arjun’s father was paper-married to his wife’s sister to get a green card for himself and his children. However, that paper-marriage was not a reality — Arjun’s father didn’t even live with his aunt. Once the authorities noted that, the family could have easily been thrown into jail for false identification. Despite this not happening, Arjun’s mother made the impulse decision to go back to India after this near brush with the feds.

It became hard for her to come back into the country on a visa after leaving. Because of this, and the family’s lack of money to go to India, Arjun and his mother would not be reunited for several years. The next decade of Arjun’s life unfolds, each decision and thought marked by the absence of Arjun’s mother in the household.

The story is a ride down Arjun’s stream of consciousness — of all his thoughts at a young age to how they have morphed and matured with the emotional intelligence he harbors after graduating college. Read much with the angst of Harry Potter in the Order of Phoenix (something that the author also makes a note of in the book), Arjun’s anger toward his mother, his country, his father, and his lack of sustainable future is evident in the pages. A short read, I felt a mix of anger, sadness, anxiety, and resolution.

Bindra takes you back to the days of the 90s and 2000s where the world was on a brink of huge social and cultural change, much from the rampant migration of so many people to America. The pages teem with possibility throughout; you think that one saving grace would push Arjun out of his circumstances, but reality takes hold of the plot. I appreciated the refreshing realness of the storyline versus the reiteration of the “he made it” narrative.

Many books tend to remove the importance of the “system” in the narrative. I felt that “Tears in the Flag” brought the flaws and the benefits of America’s capitalistic society, economy, and immigration laws to light. Even at a micro-system level (ex. a household), there are so many relationships, generational, and societal dynamics at play; this is all a result of the macro-system. Take for example, how Bollywood can affect a singular household.

What I find in many books that talk about growing up in America is the fact that Bollywood is simply alluded to as a piece of the Indian American puzzle. Many Indian Americans turned to Bollywood as a way to still feel connected with things that felt familiar and pass it on to future generations. This is exactly what Arjun did — he watched Bollywood movies all the time. This seemingly innocent motivation then propagates the behavior of these characters in these movies — which aren’t so innocently motivated.

In fact, Bollywood is definitely a giant media proponent of the “collectivistic mindset” versus individuality — the movies make you WANT that large extended and happy family that can overcome any obstacle thrown at them. I really appreciated Bindra’s analysis on deciphering why Bollywood proliferates problematic expectations of family and values, and how that could impact families in real-time. Not explicitly naming “Kabhi Kushi Kabhi Gham” or “Hum Saath Saath Hain,” Bindra writes:

“Meanwhile, my American peers had a very different idea of how families stay happy and have healthy relationships, and it didn’t look like a Bollywood movie of family members constantly being on top of one another without any space to themselves.”

It’s easy to ignore the problematic themes in Bollywood, but once thought about, it’s hard to distinguish between what you find entertaining and the stark and unfair reality of societal expectations which Bollywood constructs each storyline on.

The story follows Arjun from his youth through his budding professional and marital years, culminating in his eventual reconnection with his mother — the long lost female figurehead of the family. More than the bittersweet ending, I was moved by Arjun’s story, his admirable perseverance, and the strength of any and all immigrant families who have all faced the unexpected consequences of migration.

Coalesced together in a tale of a family torn asunder, “Tears in the Flag” is a quick yet meaningful read on how one family could be so affected by the system we have in place today.

“Yes, some people might say that I broke the law, but what are you supposed to do to survive? Go back to where you came from?And where is that exactly when you spent the last decade of your life becoming an American?”

Buy your copy of “Tears in the Flag” here!