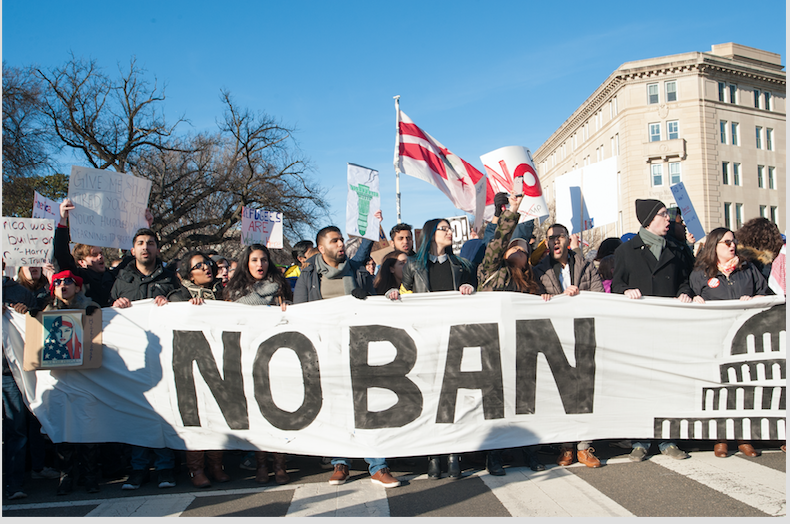 This post was originally published on The Muslim Observer and republished with their permission.

Just after Muslims around the world finished observing the holy month of Ramadan and celebrated Eid, the Supreme Court on Monday, June 26 lifted most of the temporary injunctions placed on President Trump’s travel ban that was struck down by multiple circuit courts.

The Court will hear the merits of the actual case against the ban, which temporarily restricts travel to the US by citizens from six majority-Muslim countries (Libya, Iran, Somalia, Sudan, Syria, and Yemen) and from all refugees, in October.

In partially upholding the ban by a unanimous vote, the Court wrote that it may “may not be enforced against foreign nationals who have a credible claim of a bona fide relationship with a person or entity in the United States.” It continued, “But when it comes to refugees who lack any such connection to the United States, for the reasons we have set out, the balance tips in favor of the government’s compelling need to provide for the nation’s security.”

However, the Court also warned the Trump administration to continue reviewing its vetting procedures that it had put on hold while waiting for a decision on the travel ban, which bans travel from the six countries for 90 days and for all refugees for 120 days.

Great day for America’s future Security and Safety, courtesy of the U.S. Supreme Court. I will keep fighting for the American people, & WIN!

Interestingly enough, the Supreme Court did not cite President Trump’s prior tweets about the travel ban, which were rumored and predicted to hurt him in the case as they did in the lower courts. Some of his incendiary remarks included:

In any event we are EXTREME VETTING people coming into the U.S. in order to help keep our country safe. The courts are slow and political!

That’s right, we need a TRAVEL BAN for certain DANGEROUS countries, not some politically correct term that won’t help us protect our people!

Now that the travel ban is in the clear until at least October, the Department of Homeland Security is expected to begin its implementation on Thursday, June 28. In a statement released on Monday, the Department said it would work closely with the State and Justice Departments to make sure the travel ban does not cause the same level of widespread chaos as when the first travel ban went into effect in January. “The implementation of the executive order will be done professionally, with clear and sufficient public notice, particularly to potentially affected travelers, and in coordination with partners in the travel industry,” DHS promised in the Monday statement.

Ironically, the news of the partial reinstatement of the “Muslim ban” also came on the heels of Indian Prime Minister Narendra Modi’s first visit with President Trump at the White House on Monday.

I thank @FLOTUS and @POTUS for the warm welcome at the @WhiteHouse. pic.twitter.com/0mL4yq9lst

Reaffirming the United States’ promise to strengthen its business and educational ties with India and sealing it with a hug (see below), President Trump after his talks with Prime Minister Modi also announced on Tuesday that he welcomes Indian visitors to America through an expedited process as part of India’s entry into the International Expedited Traveler Initiative (Global Entry Program). The program, which is run by the US Customs and Border Protection, allows for faster clearance for pre-approved travelers to the United States and also includes citizens from Switzerland and the United Kingdom. As India’s relationship with the United States has deepened since Prime Minister Modi’s multiple meetings with President Obama, this comes as more good news for desis living abroad.

From banning certain people of color into the country one moment to facilitating the ease for certain tourists of color to enter the country the next, the unpredictability of President Trump’s decisions regarding foreigners certainly may cause anxiety and confusion for many. We now just have to hold our breaths until October and hope that the Supreme Court recognizes the unconstitutionality of the President’s prejudiced attitudes towards Muslims and/or that the President does not try to enforce another radical executive order.