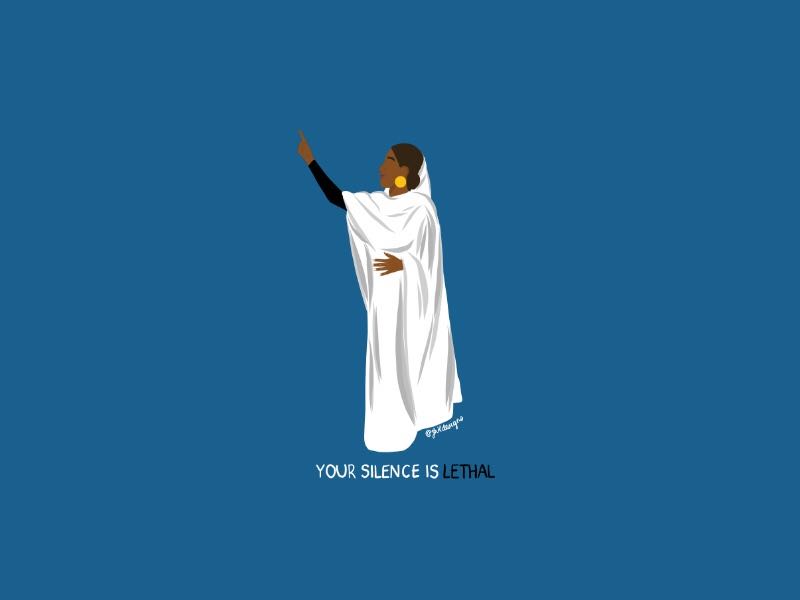 A sea of blue profile photos, images and posts has flooded Instagram over the past several days, honoring and shedding light on the innocent lives lost in Sudan’s fight for democracy. Reportedly the favorite color of one of the conflict’s many victims, 26-year-old engineer Mohamed Mattar, the deep blue hue is being used to express solidarity with the Sudanese people and raise awareness about the escalating humanitarian crisis.

While the struggle for democracy in the northeast African country has been ongoing for over six months, the international community has only recently taken notice of the situation as the circumstances have turned dire. Extreme violence and human rights violations have overtaken the peaceful protests, resulting in a rapidly increasing number of fatalities. According to Sudanese doctors, 118 people have been killed in the conflict, as of June 15.

The Roots of the Conflict

Sudan’s former president and dictator of 30 years, Omar al-Bashir, started to raise prices on bread and fuel in an attempt to improve Sudan’s weakened economy. Frustrated by the country’s declining standard of living, the Sudanese Professionals Association (SPA) — comprised of doctors, lawyers, and health workers — started to organize peaceful protests, and Sudanese citizens began to call for a transition to democracy.

After months of peaceful demonstrations, protesters occupied the square in front of military headquarters in Khartoum on April 6, demanding Bashir’s removal. Five days later, Bashir was forced out of power by the military, and the Transition Military Council (TMC), a group of seven commanding generals of Sudan’s military forces, took temporary control of the government.

On May 15, the SPA and TMC agreed to a three-year period of transition to a civilian-led government. Demonstrators advocated for a lengthy transitional period as they believe it is essential to allow time for a complete deconstruction of the systemic corruption, which plagued the government for decades under Bashir, and to establish a truly democratic government.

The conflict drastically escalated on June 3 when the Rapid Support Forces (RSF) — a government paramilitary group that the International Criminal Court (ICC) and the U.S. government held responsible for the genocide in Darfur — began to attack innocent protesters.

Opposition leaders Mohamed Esmat, Ismail Jalab, and Yasir Arman were later arrested by the military. Online reports and videos from activists on the ground show that houses are being burnt down, people are being beaten, tortured, raped and murdered, and many are missing. Currently, Sudan is in an Internet blackout, and markets and many hospitals are closed.

Women are Leading the Fight for Change

During his reign, Bashir had implemented a series of “public order” laws, which were particularly oppressive to the women of Sudan. Under current law, women must obtain permission from a male guardian to work or travel outside the home, and women are often beaten or arrested for not covering their hair in public, spending time with male friends or wearing “indecent clothes,” such as pants or skirts.

From the beginning of the uprising, women have been at the forefront. Sudanese women fought for maternity leave, equal pay and the right to vote, often before other countries in the region, and through the demonstrations, they are demanding a political voice. One of the SPA’s main demands is that women should have 40 percent representation in the future civilian government.

With activists using social media as the primary platform to raise awareness about the atrocities in Sudan, it is impossible to ignore the vital role women have played, as videos show them on the front lines of protests, leading chants and confronting authorities.

Although some organizations and governments have reacted, activists have also shown outrage at the lack of response from the global community. The African Union voted to suspend Sudan until the civilian-led transitional authority is established, and the United States appointed a special envoy to help bring the conflict to a peaceful resolution.

The United Arab Emirates described the events of June 3 as a “massacre” and called for an investigation, and the European Union condemned the Sudanese military. Egypt, an ally provides economic aid to Sudan, has been slow to respond. For atrocities of this level, the global response has primarily been silence.

Activists are also criticizing the lack of international media attention on the swiftly escalating crisis.

It’s funny how when the Notre Dame fire happened I couldn’t go on social media at all without seeing it. People are DYING in Sudan and I’ve had to actively follow people and seek out information to even know what was going on.

We care more about buildings than humans now? Wild

How You Can Help

Because the uprising in Sudan has not received the necessary traditional media coverage, activists are relying on social media to help raise awareness. Due to the current internet shut down, activists are struggling to share what is happening but are using hashtags like #IAmTheSudanRevolution, #SudanCivilDisobedience and #SudanUprising to raise awareness and call for action.

Using the same hashtags, you can help to circulate information and amplify the awareness campaign.

“in a world that’d rather hate than tolerate we demand tolerance we demand an end to violence we demand equality we demand a voice — the color of our skin should not determine our need for justice nor should it belittle our pain our culture, appearance, identity should not defer you from hearing our cries, our names — the earth is stained with the blood of those innocent and those wrongfully detained destruction has consumed it leaving nothing but pain pray for the world pray for it to remain” — @aqamar92 ??? — While Sudan is currently in state of crisis and a media blackout, it is vital to talk about the crisis plaguing the country. Raising awareness, educating yourself and sparking a discussion online and IRL is vital, and that's what we intend on doing at Brown Girl in the coming days and weeks. Women have been at the forefront of the demonstration and the most notable leader Kandaka or Nubian Queen (who is represented in the illustration above — courtesy of @zhkdesigns?) who has become the power symbol of this protest. More to come but in the meantime, please feel free to DM us resources we can include in our coverage.????? — #sudan #sudanrevolts #sudanuprising

Change your profile picture to blue, and be sure to explain to your followers how it increases awareness about what’s happening in Sudan and honors those who have died while protesting.

Donate to an Organization or Campaign

Activists and organizations, like nonprofit United to Help, around the world are organizing relief efforts to provide emergency medical aid, food, and medicine to the hundreds of thousands affected in Sudan.

Sudanese-American human rights activist Remaz Mahgoub Khalaleyal (@reresolve_ on IG) started a Go Fund Me campaign for emergency medical aid, and activists are also donating to the nonprofit The Sound Heart. The University of Khartoum Alumni Association USA is also collecting funds for food, water, and medical aid on Facebook.

You can also donate to UNICEF, Save the Children, or the International Rescue Committee, who are all working to help children and families displaced by the conflict.

Reach out to your members of Congress and call for them to address what’s happening in Sudan and support the Sudanese people.

To get in touch with your representatives, call 202-224-3121 and enter your zip code. When connected, tell them you support helping the people of Sudan and want an international investigation of the massacre. You can also text ‘RESIST’ to 50409 to send a letter to your elected officials.

Use Your Voice — Protest

Join a local protest or demonstration to show your support (and make sure to use the hashtags when sharing about it on social media).

The Struggle for Democracy Continues

As the conflict in Sudan carries on, many civilians are afraid to leave their homes and being attacked by the RSF. On June 12, the army stated it would release political prisoners, and the opposition movement temporarily called off strikes in order to resume talks.

However, there remains a strong lack of agreement on who should lead the government. Sudanese generals want the military to maintain control over the interim government, while civilians are demanding an international investigation of the massacre and the withdrawal of the RSF.

Many are worried that the longer the stalemate continues, the greater the risk of civil war.