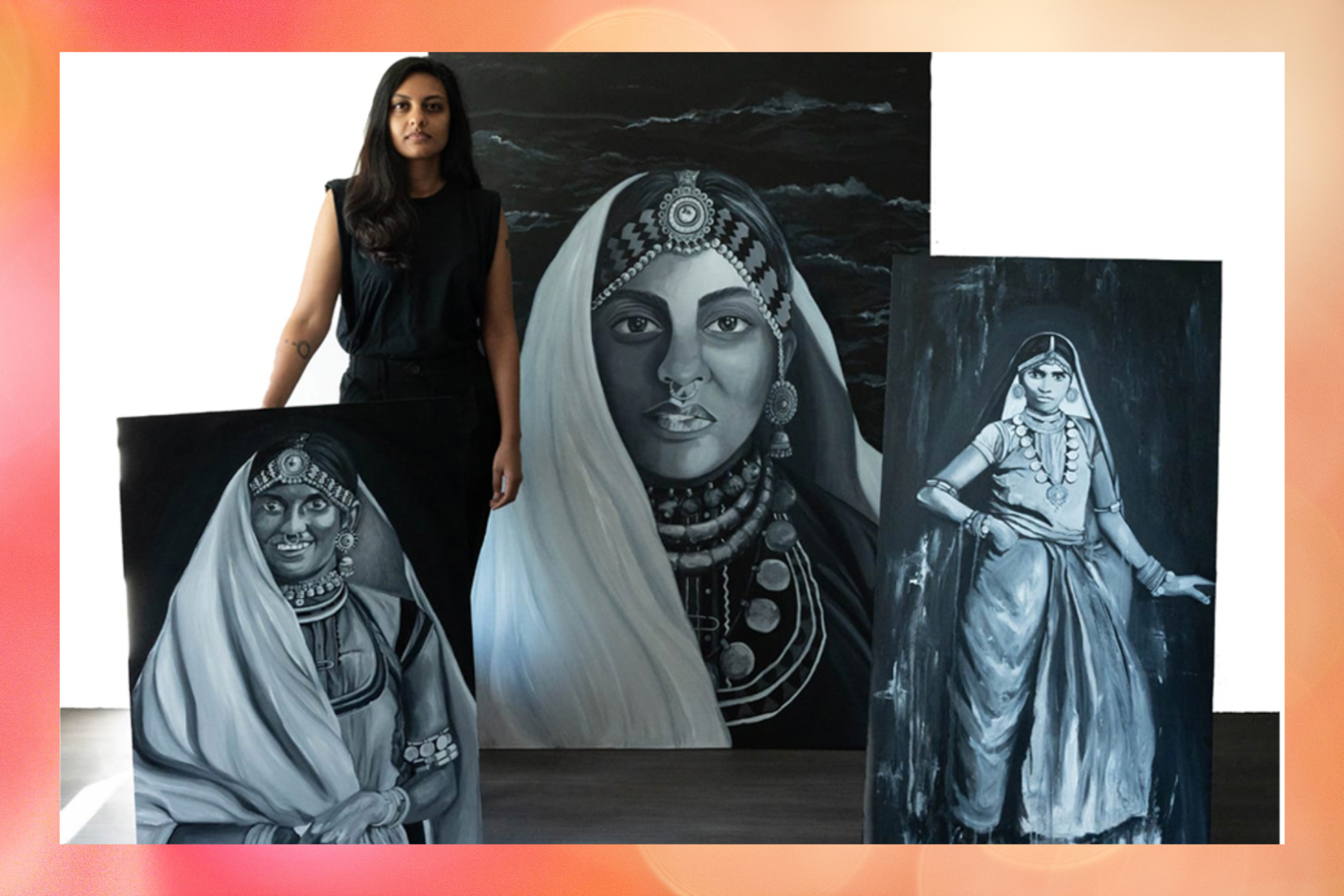 Thundering waves clawed on the body of the vessel as the sea swallowed the voices of terrified passengers. They clung to the shreds of the Eagle Speed as each hour submerged the ship deeper within the kala pani (dark waters). Steamer ships were sent for rescue, finding two children alone, clenching to the remains of the mast. The unscathed captain and crew fled in boats, leaving the lives of coolies (indentured laborers) to the fate of the dark waters. The Eagle Speed set sail on August 19th, 1865 from Calcutta to Demerara. This tragedy took the lives of over 300 hundred indentured laborers. The coolies onboard were not just casualties of the kala pani, but a larger system of British colonialism.

The crossing of these tumultuous seas was forbidden for Hindus, as it meant the severance of reincarnation and the unraveling of caste. Yet more than 2 million Indians were taken across the kala pani. The forbidden water carried stories along its transatlantic waves, bearing witness to history lost against its tides. The restraints of caste drowned along the voyages as surnames and relations were cast across the seas. They became Singhs (lions) and Maharaj’s (great kings), Brahmins by boat instead of birth.

These indentured workers were mainly taken from regions of Bihar and Uttar Pradesh to different corners of the globe, with some of the largest to the Caribbean. Guyana experienced around 238,909 workers, Trinidad 143,939 and Suriname 34,304. With 399 Indians, the Lalla Rookh docked on June 5, 1873, at Nieuw Amsterdam in Suriname, later becoming known as the coolie depot. As workers poured out of ships and onto plantations, they experienced violence and oppression at alarming rates, especially against women.

They were nameless and barefooted with gold jhumkas and bangles adorning their bodies. As tourism increased in the Caribbean’s, photographing indentured women on postcards became part of its selling point. These women became subjects to appease the white colonizer gaze and fetishized exotic ‘Coolie belles.’ A bulk of these postcards were shot in Trinidad and sold in local shops to visiting tourists. Yet these postcards failed to translate the hierarchy of power between the photographed and those behind the camera. The white European men who carried out these photoshoots chose backdrops that masked the real conditions of sugar cane fields and living quarters. Who were these women? What were their names? The women were juxtaposed with the term ‘Coolie,’ a slur for laborer and ‘Belle,’ the French word for beautiful. They were coined as laborers of beauty, yet their eyes tell a story of fear of pain.

Tu hamár ke bate? (Who are you to me?) Tu hiyá ká kare he? (What are you doing here?) Tu kahá báte? (Where are you?) Artist Nazrina Rodjan posits these questions that rummage through the minds of many Indo Caribbean descendants. Who were my ancestors? What did they experience? Rodjan aims to explore the experiences of indentured women through her oil painting series “Kala Pani.” In this series, she reimagines the postcards of indentured women alike the depictions of European nobility. In conversation with Rodjan she mentions,

I’ve thought long and hard about whether it would be ethical to reproduce these staged images of women who might have felt scared and uncomfortable being brought into these studios to be photographed by men. I will never know their true experiences and how they might have felt knowing a stranger in the future will decide to paint them in the same positions they were put in for the original photograph.

Rodjan’s art series started as a way to commemorate 150 years since the first indentured workers arrived in Suriname and expanded to include regions like Guyana, Trinidad and Jamaica.

Wanting to reclaim these images comes from feelings of injustice whenever I see these postcards. They were made from a dehumanizing perspective. Reclaiming these images becomes necessary knowing how the violence Indo-Caribbean women still face today is just a continuation of the violence brought onto indentured Indian women then. To me, creating this piece, symbolized the acceptance of questions remaining unanswered, stories being lost forever, and realizing that after a history full of trauma, there’s a treasure in the women that are still here to tell their stories.

The ratio of men to women arriving on these ships left little to no autonomy for women. Experiences of violence on ships and plantations were common throughout the Caribbean. Despite this, indentured women became trailblazers and pioneers in uprisings against poor working conditions.

Everything about these women seems to be a question we can never answer, but I decided to give them titles in Hindustani that are questions they might have for me as the painter who looks at them and sees both a stranger and a loved one. Tu hamár ke báte? Who are you to me?

Living in the Netherlands, Rodjan talks about her experiences tracing her ancestry and honoring this history:

Unfortunately, in the Netherlands learning about the history of Dutch colonization only meant memorizing all the different spices they brought in and listening to teachers talking proudly about the Dutch East India Company in elementary school. Tracing back my ancestors has so far only led to a picture of my parnani and a few more names in the family tree.

On May 5, 1838, Anat Ram stepped foot on the rich grounds of Berbice, becoming the first Indian laborer in Guyana. The Whitby and Hesperus departed from Calcutta on January 13 and arrived in Berbice first then West Demerara. Over the course of 79 years, approximately 259 ships voyaged from India to Guyana. While the experiences of these ancestors may remain unknown, artists like Suchitra Mattai aims to revitalize the voices of our indentured ancestors.

Suchitra Mattai is an Indo Guyanese multi-disciplinary artist. Through her work, she uses the experience of her family’s migration and the history of indentureship to rewrite and expand our notions of history. In her piece, Life-line, a rope of saris pours out of a tilted boat, mirroring the experiences of her ancestor’s journey across the transatlantic. The saris serve as both water and a connection to two lands, India and Guyana. Mattai further explores indentureship in the piece “Coolie Woman,” depicting a woman seated with a sari, embellished with jewelry and flowers.

I wanted to reimagine the photo to give her agency. I also wanted to address the desire for people of the diaspora to connect to their homelands and ancestral pasts. The painted wallpaper drips and fades to parallel the way my memory of Guyana ebbs and flows, Mattai says.

Anchoring at the Port of Spain on April 22, 1917, the last ship to ever carry indentured Indians made its final stop. A system that bound Indians to an unknown land finally ended after 79 years.

To invoke conversation and pay homage to their memory, artist Gabrielle Francis creatively analyzes indentureship. Gabrielle Francis is an Indo Trinidadian queer interdisciplinary artist, writer and organizer from Queens, New York. In her piece “206:21 Queer Altar Mixed Media Performance,” Francis pays homage to her indentured ancestors with a focus on queer identities. The title 206:21 reflects the ratio of men to women that journeyed on the Fatel Razack, the first ship from India to Trinidad. A mirror is decorated with the colors of Trinidad’s flag along with six candles embodying the pride flag and vibrant red carnations. Written across the mirror is, “I wonder how many of you were queer?” A question that allows for openness and conversation around potential queer ancestors. Written records around indentureship were translated and produced by European men, leaving little to no room for women or queer folks. Francis’s work aims to transform and challenge Eurocentric narratives surrounding indentured history.

As descendants of indentureship, it becomes difficult to sit with questions that may never have answers. Visiting National Archives or exploring digital databases can help connect descendants to learn about their own history. As we unravel difficult experiences of the past it’s important to ask, how do we carry the legacies of our ancestors? How do we honor their sacrifices?

As they were stripped of their identities and reduced to passenger numbers, they fostered new relations—jahaji bhai and jahaji bhain (ship brother and sister). From shipmates to family, to present-day melodies of chutney music to the stew of pepper pot on Christmas morning, these bonds of community have evolved and are seen across the diaspora today.