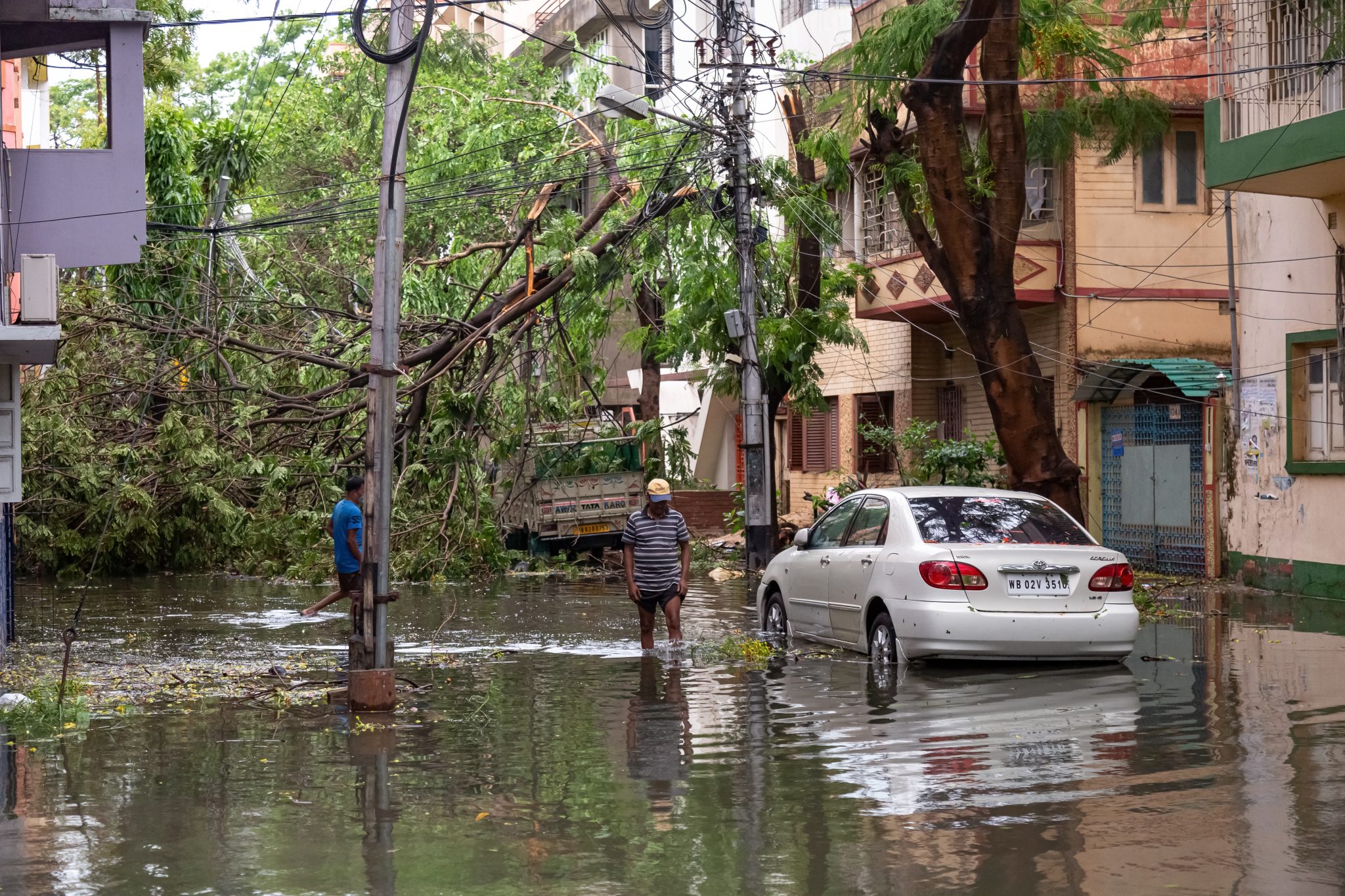 Bangladeshis and Indians are stuck between a rock and a hard place. Cyclone Amphan, the most powerful cyclone in 20 years, has struck India’s coast. At the time of this report, the impacts are far from certain, but the cyclone’s threat is clear and the scope is up to fate. Thousands of homes have been destroyed, millions are being evacuated due to flooding and at least 84 people have lost their lives, including volunteers.

Bangladesh and parts of eastern India, now sit at the intersection of three inextricable problems. First, Cyclone Amphan has already forced 2.4 million people to evacuate their homes and permanent displacement on a large scale is inevitable. More than a million Rohingya refugees reside in crowded camps in Cox’s Bazar, a district located five kilometers from the cyclone’s expected path. Although the storm is not expected to hit the camps directly, thousands of makeshift homes in Bangladesh have already been uprooted in a country where 40 percent of residents live in this sort of transient, communal housing.

According to BBC News, the storm is the first super cyclone to form in the Bay of Bengal since 1999, while the winds have weakened since it first struck, it is still classified as severe with dire consequences. The timing of the cyclone coinciding with efforts to mitigate the spread of the pandemic has created obstacles in relief efforts. Safety measures in place to avoid the spread of the novel coronavirus including social distancing have made it difficult for volunteers and officials to provide resources to those affected by the disaster. Social distancing has disabled shelters from being used to their max capacity in addition to already affecting poorer and more crowded areas with less access to resources.

In addition to lack of space in shelters, police in West Bengal said that many are unwilling to go to the cyclone shelters out of fear of contracting COVID-19, The New York Times reported. And can you blame them? They are working through the twisted mental calculus of whether to risk their lives to a deadly pandemic or to try to survive a deadly natural disaster.

Systemic and essentially inevitable factors also threaten the region’s residents in the long-term, including the impact of climate change. While Cyclone Amphan will drive more and more people out of their homes, this region has already borne the brunt of climate change-linked natural disasters. In 2019 alone, more than 4 million people were displaced by natural disasters in Bangladesh, according to the Internal Displacement Monitoring Centre.

This cyclone reminds me that, time and time again, non-Western countries with lower emissions are forced to pay the costs incurred by elites in Western countries to fuel unnecessarily high living standards for the few at the top. Now, some argue, countries like China and India are responsible for the majority of carbon emissions and therefore should be held accountable to rigorous emissions standards.

While a sustainable path to development is ideal, the hypocrisy in that sort of assertion is egregious. The U.S. is still the world’s largest emitter.  Moreover, the U.S. pioneered a rapacious, environmentally extractive model for economic development and tried to ensure that those who followed a more sustainable path would struggle to compete. For much of South Asia, it’s a lose-lose situation. It is worth remembering that more than half of the highest-emitting countries rank among the least vulnerable to climate change and nearly two-thirds of the countries with low or moderate emissions are acutely vulnerable to the effects.

Some glimpses of cyclone Amphan pic.twitter.com/haVhOKccTH

It may seem that these impacts are unintentional, that they are the inevitable cost of economic advancement, that they just so happen to impact poor brown and black people the most because those communities have fewer resources. But it is important to recognize that environmental injustices are often intentional. The impacts themselves may be inevitable under our current global economic paradigm—though that itself could be changed with the political will to do so—they are often foisted on vulnerable populations knowingly.

This strategy has been deployed against the global South for decades. The former Chief Economist of the World Bank, Lawrence Summers, infamously exposed this thinking in his 1991 World Bank internal memorandum advocating for dumping toxic waste in the world’s “least developed” countries because the “economic logic” was “impeccable.”

A fairly long time has passed since then, and rhetoric has outwardly softened, but not much has changed for people on the ground living in the areas most affected by climate change. Meanwhile, the Western powers-that-be call for endless economic growth at all costs. This is a flawed premise, as the gains of economic growth worldwide have accrued disproportionately to those at the top. If we are willing to sacrifice human lives at the altar of economic growth, it is even more unconscionable that that growth has only benefited a small fraction of the population in a substantial way.

Mitigating the impacts of climate change isn’t a matter of altruism; it’s a matter of taking responsibility. Until the largest historical emitters do that, countries in the global South will continue to suffer from this colonialist hangover. The World Bank estimates that the number of Bangladeshis displaced by the varied impacts of climate change could reach 13.3 million by 2050, making it the country’s number-one driver of internal migration.

While the coronavirus occupies the world’s psyche, we must pay attention to the vulnerable populations facing far greater threats layered on top of the pandemic and take responsibility for our role in exacerbating those threats.