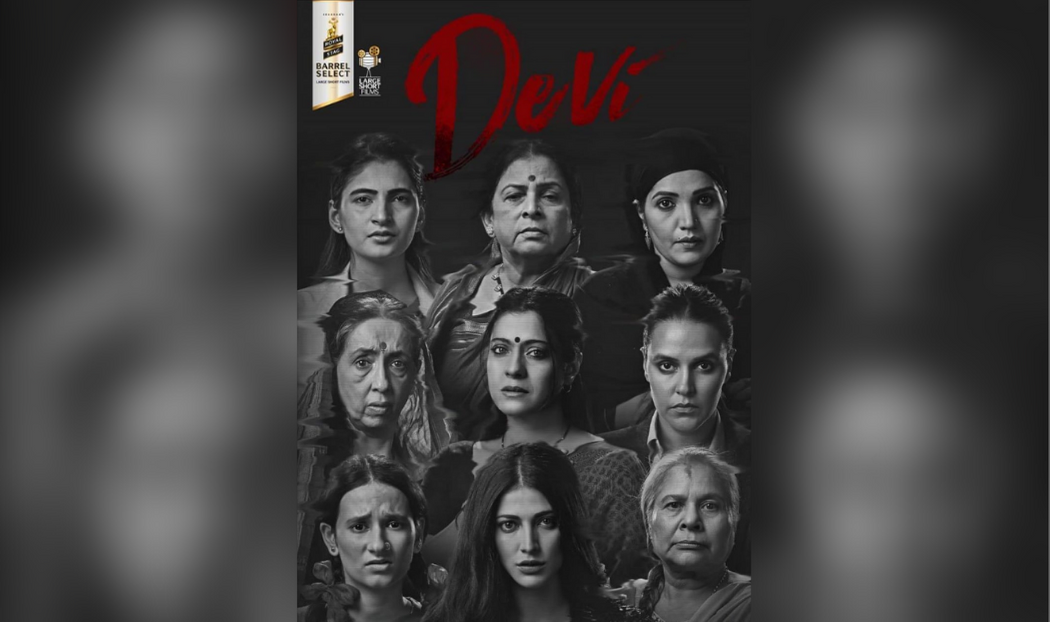 The opening shot of “Devi” introduces the viewer to what looks like a normal living room in a regular Indian household. A woman walks around with a pooja plate. A girl sits at the dining table studying while a younger one sits in front of the TV, thumping the remote to get it to work. But as we get a closer view, it becomes clear this is not a regular home nor does it contain a normal group of inhabitants.

We are introduced to more women: Two older ladies with bright-colored saris and red bindis chatter away as they play a card game on the ground; a burqa-clad woman sits next to them, waxing her legs. Yashaswani Dayama’s worn-down shirt looks like it has seen far better days, and Shruti Haasan sits on the couch in shimmery party clothes and an alcohol bottle in hand. These are all women of different ages, religions, economic and class statuses, yet in this crowded room, they all seem to be connected as victims of sexual abuse, assault, and rape.

Bts of Devi … thank u @ashesinwind and @ryanivanstephen for making me a part of this statement.. some things need to be seen to be understood on a deeper level. #devi #womanspeak

Priyanka Banerjee’s 13-minute short film is succinct and to the point. It doesn’t beat around the bush, and there’s no time or space for melodrama. When the TV finally works, there’s a new rape case, there’s a new victim outside their door, but these women don’t have space for another one. This is no peaceful sisterhood. This is no therapy session. These women are angry and have had enough. They fail to understand each other’s trauma and pain, but in a heartbreaking climax (SPOILER ALERT: I totally cried), they realize that even with their differences they only have each other, and they don’t need any words to express that tragic solidarity.

Social message aside, “Devi” is also a cleverly made film, and the symbolism is beautiful. Shruti Hassan and Neha Dhupia with their polished clothes and English accented speech are clearly of a privileged class – high profile cases, who get the attention, as opposed to the women who sit down and go about their lives as if it’s a normal occurrence. There are also references to historical rape cases in India. For example, there’s no mistaking that Shivani Raghuvanshi, who sits at a table with a white coat and pours over medical textbooks, is supposed to signify Nirbhaya – the victim of the 2012 Delhi gang-rape case. It’s almost poetic that the short film was released a day before the four convicts of the case were finally hanged.

“Devi” is short, powerful and emotional without being preachy. The mentions of rape obviously require a content warning (though thankfully there is no graphic detailing), but this short film is a must-watch. It makes you question how a country like India, in which so many worship several different goddesses, or devis, is the same nation that fails to protect its women.