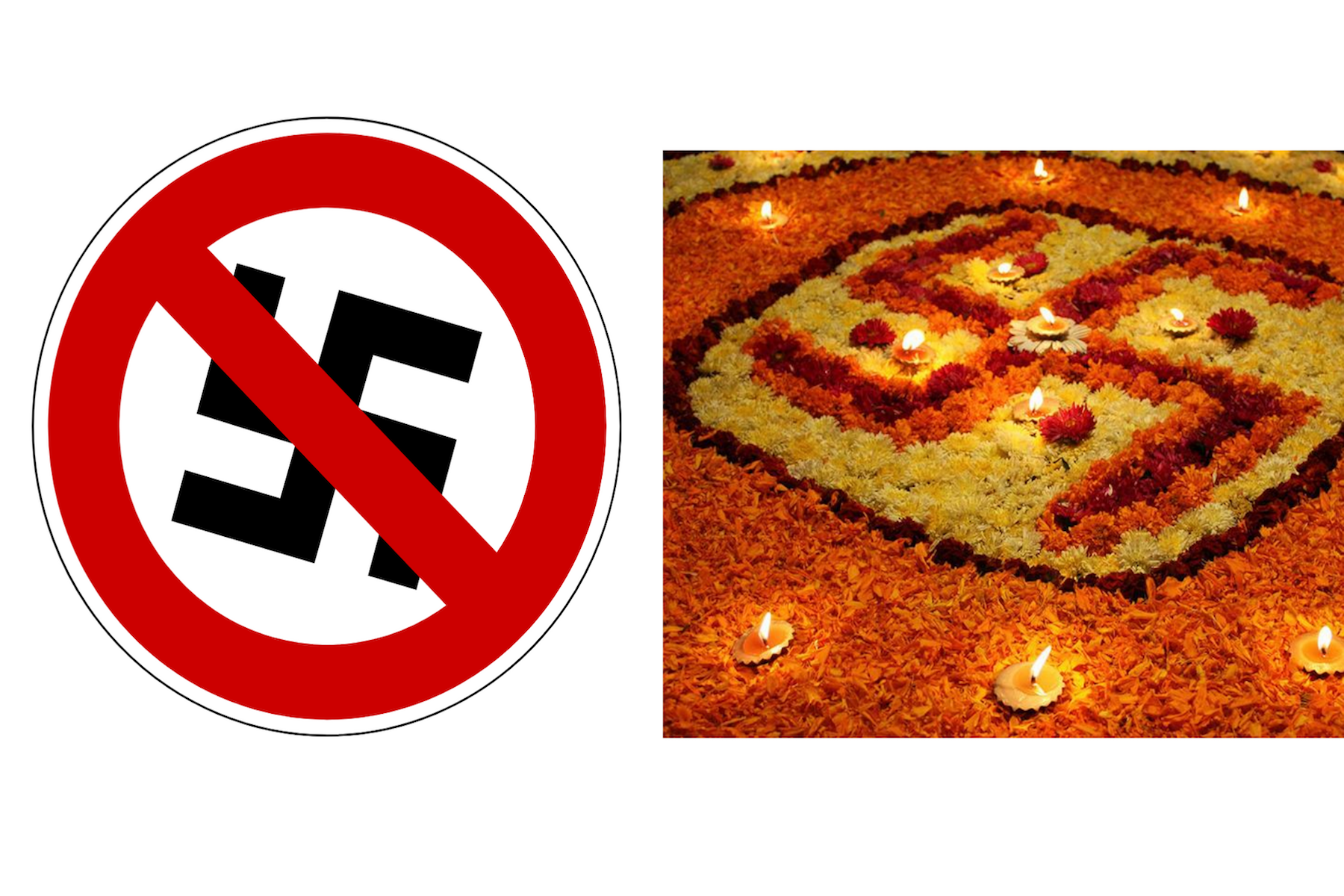 Since the onset of World War II, the “hakenkreuz”—the infamous symbol of the Nazi party—is widely identified as a representation of anti-Semitism since Nazi persecution led to the death of approximately 11 million Jews during the Holocaust and signifies trauma for many people today. Although the world is now acutely aware of the symbol’s significance and some countries have even had it banned, the usage of the hakenkreuz, which has been incorrectly called the “swastika,” has alarmingly increased in the United States due to the recent rise of alt-right and white supremacy groups, acts of violence against minorities and hate crimes.

For years, members of the South Asian community, cultural organizations and religious groups have tried to explain that the Nazis did not use the swastika—originally a symbol of divinity and spirituality in Indian religions, including Hinduism, Buddhism and Jainism—but the Hakenkreuz, which means “hooked cross” in German. According to them, the two symbols are radically different and while the use of the Hakenkreuz should be prohibited due to its association with hate, bigotry and racism, the swastika should not. Recently, legislation introduced in the New York Senate aims to include the swastika—not the Hakenkreuz—as a symbol of hate to be taught to children in all schools in New York, prompting South Asian communities to raise awareness about the need to change the wording in the bill from swastika to Hakenkreuz, and the implications should this not occur.

In August 2019, New York State Senator Todd Kaminsky (District 9) introduced Senate Bill S6648, which requires New York schools to include the swastika as a “hate symbol” in the curricula for grades six through twelve.  The bill is intended to better educate the youth on what these symbols represent and thereby foster a more inclusive society. On July 21, the bill was passed by the Senate and now awaits the review of the Assembly Education Committee. If passed into law, the bill will mandate all students in New York to learn that the swastika is exclusively associated with hatred and intolerance.

[Read Related: Yet Another Hate Crime Against the Sikh Community Leads to Calls for Trump to Condemn White Supremacy]

Originally, the swastika, from the Sanskrit word svastika which means “good fortune” or “well-being,” is a millennia-old religious symbol that stands for peace and prosperity in Hindu, Buddhist, Jain, Native American and African spiritual traditions, and is commonly written in red ink or paint or created with flowers. As such, it remains a common sight in many temples and religious practices around the world, including as a welcome sign in many South Asian homes in the United States. When the Nazi Party was formed in the 1900s, Adolf Hitler appropriated the symbol by flipping the swastika, removing the four dots and tilting the symbol to the right, creating the Hakenkreuz and adopting it as the party’s emblem in 1920. The symbol was frequently used as a point of pride for members of the Party and to instill fear and respect in the broader population.

Since the swastika’s history predating the Nazi Party and its association with certain religions is not common knowledge for those not a part of the minority communities that use it, most people in the United States are unable to differentiate between the swastika and the Hakenkreuz. As a result, when rules or legislation attempt to ban the swastika or brand it solely as a representation of hate, bigotry and racism when educating children, it reinforces a singular perspective and forgets the cultural context in which it was used for many years and still continues to be used. Furthermore, students from communities that use the swastika as a part of their traditions are at increased risk of having their practices falsely recast as hateful within the classroom and among their social circles.

In the case of the New York Bill S6648, if this legislation were to pass in the state and classify the swastika as only a symbol of hate, it would create a sense of confusion for South Asian children and those of other religions and cultures who have grown up seeing the swastika being used by their family and friends in rituals, celebrations and more. Additionally, it will propagate more hate towards those communities that openly use the symbol for their religious or cultural practices.

New York has the largest school system in the United States, and so if a bill such as this were to pass into law, it is likely that other states across the country would follow suit, thereby influencing the education of hundreds of thousands of children. Due to the bill’s national implications, organizations like the World Hindu Council of America, specifically their initiative American Hindus Against Defamation (AHAD), have urged the New York Senate to differentiate between the original swastika and the Nazi Hakenkreuz.

The organization issued a public statement, saying “To label the Swastika as a symbol of hate would be a grave insult to 1.8 billion Hindus and Buddhists around the world.” It further explains that the bill would perpetuate ignorance and promote Hinduphobia in schools across New York, which could translate to the whole country if other states replicated the New York Bill. Organizations like AHAD are also working closely with Jewish groups like the American Jewish Committee (AJC) to create educational resources that explain the difference between the two symbols.

Meanwhile, the Coalition of Hindus of North America (CoHNA) has set up a petition on its website that calls for the New York Senate to rename the swastika as the Hakenkreuz in the bill, promote and circulate educational materials about the difference between these two symbols and consult stakeholders from the Jewish community as well as the Hindu, Buddhist, Jain, African-American and indigenous communities to help develop culturally competent resources and messaging about this issue. As a result of the overwhelming response to the petition, CoHNA announced that the Assembly is reconsidering the bill.

As the United States sees increasing acts of violence against ethnic minorities by groups and individuals who use symbols like the swastika to represent their views, it’s important to be mindful of the trauma that Jewish communities and others who were persecuted by the Nazis face when they see symbols that remind them of horrific past events and ongoing violent acts. At the same time, South Asian communities and others who use the swastika in their daily religious and cultural practices, and have been for thousands of years, need to be allowed to educate legislators, friends and family on the history of the swastika and how important it is to distinguish between the swastika and the Hakenkreuz. In this way, the United States will be able to move forward with crafting policies that educate the youth about hate crimes and symbols while being mindful of the cultural context in which they are used.

For New York residents who want to voice their opposition against the current Assembly Bill that singularly classifies the swastika as a hate symbol, here are some ways to get involved: