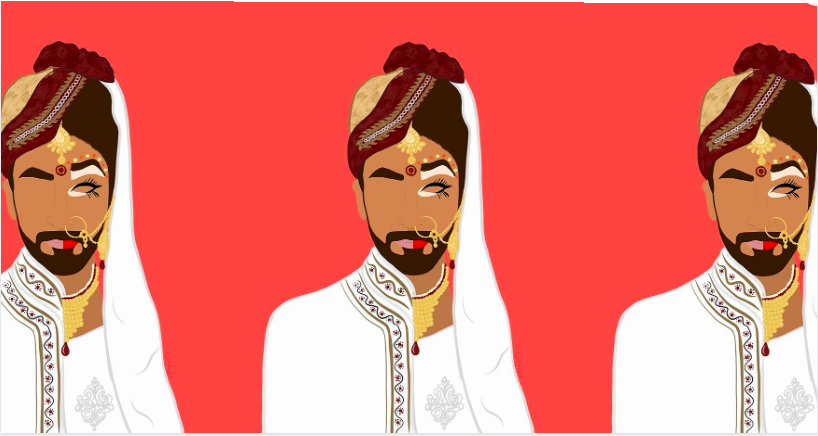 Living, especially in the time of quarantine and coronavirus, is complicated, anxiety-ridden, and full of emotion. In these journal-style short essays, Brown Girl writer Divya Seth explores whether space really means freedom and the wonderful queer-coding of Falguni’s music videos of ’90s Bollywood.

The queen of social anxiety toasts to me, tipsy, speaking on sheer impulse, at my birthday party. She falls deep asleep on my couch, exhausted and content and safe, so much so that the thought of waking her up is too cruel. She cries quietly, sitting across from me at brunch, and I can feel her relief and her happiness, because there they are, springing from her eyes. She does the Cotton-Eyed Joe as a dare on the subway, and she delights in making a fool of herself in front of strangers. I watch, with envy and love, as she laughs. She somersaults into standing up for others, not a thought or a moment of hesitation. She reaches, despite herself, for those who claim they do not need her. She bleeds openly, needy and embarrassed, challenging them, daring them to look. She leads me, fearlessly, through the darkest times, and I creep behind her, afraid, grateful, safe. In the five years between my birth and hers, something shifted, the planets somehow, the stars in some way. And, so, this is how she was born: brave.

I imagine that it takes a lot of preparation to send a living thing into space. This is a mission to live among the stars. It takes experimentation and asking as many questions as possible in an attempt to recreate space-like conditions, here, in our predictable safe cradle of a planet to create an astronaut. What happens to a wanna-be astronaut when we dial the thermostat all the way down, and she gets so cold she can barely feel her fingers, and she gets slow, and tired, and uncoordinated? What happens when you turn the pressure all the way up—so high that she won’t be able to fathom dragging her limbs across the floor because she’s sapped of energy, leaden, stuck. What happens when she’s swung around so fast that she doesn’t know which way is up and neither does her stomach? Will she still want to be an astronaut? How will she propel herself into the stars? Will the sheer force of her dream jettison her body out beyond the grasp of our gravity?

How can I dream of free-floating, when my feet cherish the touch of grass, sand, and soil. Barefooted cartwheels and handstands that are only complete upon landing. How can I subject myself to the pressures and changes of disorientation, when I am most content absolutely still, drinking in a steady sunbeam. How is it that I want to be spinning, dizzied, and all the while, ache for the slowness of summer. I want to sink into an ocean and witness the catastrophe of its waves around me. I want to lay down, let the soil absorb my nutrients, and be enveloped by the cacophony of cicadas. I want to be one with the floorboards of a concert hall and let the crash of orchestral crescendos reverberate through me. I want chaos to melt into my skin like sweat, I want to heave with it, drink it into my lungs, allow my body to hum with the frequency. I want to find peace in the pulse.

All electrons have spin. Any given electron pair is always and only spinning in opposite directions. And yet we are intact. You’d think we’d go careening away, every little piece of us, in exactly opposite directions, and yet we do not. Where does that chaos go? That constant whirring and zooming that we’re made of. Do we siphon it off in little rages? Furious honking after being cut off in traffic, sweating over stationary cycles, and la petite morts? What if you’re unable to release your chaos, because it is so overwhelming that you’re stricken, stilled and silenced by it, and so you’ve never known how. And now it’s unbearable. And so, you wish that someone would pop you like a balloon, releasing it all at once, all the wishing and wanting and spinning and zooming inside of you. Maybe you’ll deflate, but maybe, as you do, you’ll be catapulted into the sky with terrifying speed. Maybe, when you’re up there, you’ll find out if the astronaut ever made it. Maybe she’s waiting among the stars, waiting to compare notes and share her journey with yours. Or, maybe, the astronaut is still on the ground, and for the briefest moments of free-floating, you’ll be living out her wildest hopes and dreams.

I love discovering the queer-coded messages of my childhood—the ones I never saw back then because I didn’t even know what queerness was. Falguni. I caught the tail end of her career but thought nothing of her grown-up bowl-cut, nor the fact that I’d never seen her in a dress. She mirrored me at the time: cropped hair, baggy jeans, different, in an unplaceable way. With puberty, I grew into femininity, grew my hair out, and forgot about Falguni. I moved onto Madhuri, devoured young adult fiction novels, and reveled in romanticism. Now, nearly a decade later, I’m rediscovering myself. Sporting a pinnie and the haircut of a soccer jock, I’ve stumbled upon Falguni again. I haven’t so much as thought of her in years, and yet I’m swiftly googling and rewatching her music videos from the ’90s. She sings saccharine love songs that are acted out, equally cheesily, by a hero and a heroine. The camera cuts to her, and in all her soft butch glory, Falguni inserts herself into the narrative and takes the place of the hero. And she dances with the classically-femme heroine. And she evades questions about her love life and sexuality. And she exists just as she is. She foils the hyper-femininity of 90’s Bollywood, and yet she is seamlessly integrated into the culture, woven in as if to say, “Why would we ever question her right to belong?”

[Read More: What Music Means to me as a Queer Desi]

In exploring sexuality and the range of feelings that accompany social anxiety, Seth’s quietly ponderous voice draws vivid pictures of the scenes she creates and thoroughly explains why being grounded doesn’t mean being trapped, even for an astronaut. Find more of her short essays here.

Divya Seth is a medical student in Harlem, NYC, who strives to one day be a multi-faceted healer, working in the physical, social, and emotional realms. She is committed to listening to and learning from sex workers, communities of color, and queer people, and lends her time to advocating for the safety of these communities through the American Medical Association. She hopes that her writing has a more personal impact than policy, and that it will encourage folks to question the status quo, enact radical empathy, and dare to demand more for themselves and for others.