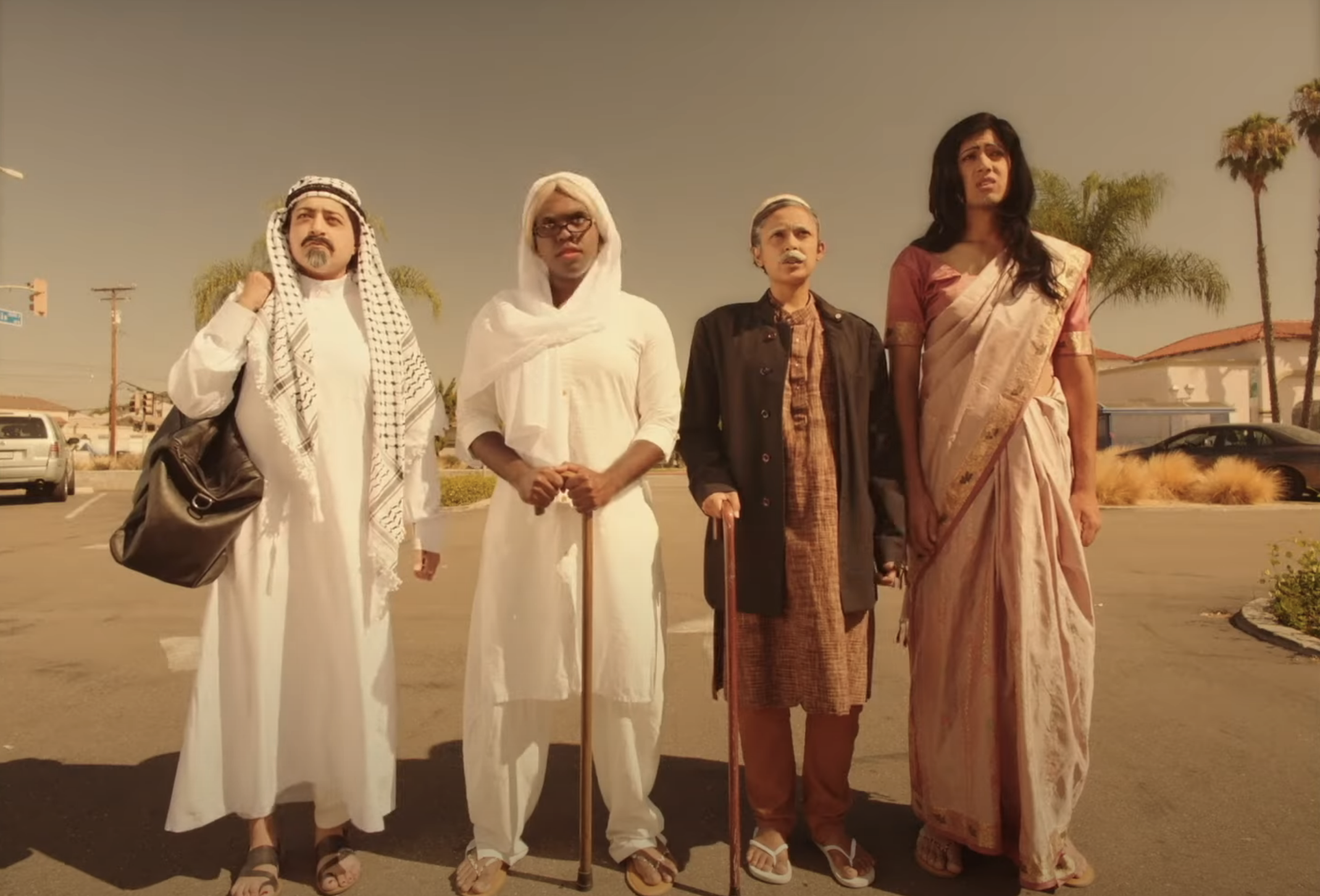 As someone who grew up in his own Little India in Iselin, New Jersey, seeing writer and director Ravi Kapoor’s sophomore film “Four Samosas” was an absolute delight. Every frame took me back to memories of my childhood, from going to my favorite chaat house, to shopping for groceries as a family at our local Subzi Mandi.

Set in the primarily South Asian town of Artesia, Los Angeles, “Four Samosas” follows Venk Potula’s Vinny, a wannabe rapper who decides that the best way to get his ex-girlfriend back is by robbing her father’s grocery store. He’s surrounded by a band of very funny characters, portrayed by Sonal Shah, Sharmita Bhattachrya, and Nirvan Patnaik, who form the titular “four samosas.” The film is heavily reminiscent of Wes Anderson films in both its visual and comedic style, but is a mashup of different, well-balanced genres. It’s a heist film mixed with a love story blended with an homage to Little Indias across the world crossed with a story about someone just trying to get their mojo back — something for everyone in the family to enjoy.

What I found most refreshing about the story is that it also emphasizes South Asian normalcy. The characters don’t need to prove their South Asian-ness to others. No one needs to validate their existence. They just are. Potula, Shah, Bhattachrya, and Patnaik all bring distinctive performances to make their characters feel both heightened, yet fully formed. And Kapoor’s confident direction helps the both the main and tremendous supporting cast, including “Deadpool’s” Karan Soni, writer/director Sujata Day, Meera Simhan, and the established Tony Mirrcandani, pour their hearts out while just having fun.

This conversation with filmmaker Ravi Kapoor has been edited for length and clarity.

What was your biggest driving force behind making this movie?

It had been way too long since I’d made my last feature “Miss India America” and I was determined to express myself and my sensibility with another feature. I’d always wanted to do a “low-fi” quirky heist film with no guns, car chases or fancy gadgets, and also wanted to do something set in Artesia, LA’s ‘Little India’, so I figured I’d combine the two.

What was it like working with the local South Asian businesses in Artesia?

The businesses were amazingly generous with letting us film in their stores, as were the temples, Artesia City Council, and groups like GOPIO and the SoCal TiE network. I think everyone was keen to promote Artesia and just to help us tell a South Asian America story.

Can you talk about how you arrived at the film’s distinctive look and visual language?

I wanted to push the visuals as much as possible and do something that had a kind of 16mm retro feel to it; something that had a theatricality about it. In one of my short films, I’d experimented with the idea of using only one wide angle lens for everything so that, combined with doing the 4:3 aspect ratio, curving the corners, letting the bright sunlight play and never shooting over-the-shoulder shots, all helped create something really defined. Our DP Aakash Raj did a fantastic job bringing it all together.

You had a breadth of supporting characters with their own arcs, such as Pushpa and the dance troupe. Where did you draw the inspiration for each of these characters?

I feel like I’d met a variation of most of these characters at some point and we just heightened them all. And my father-in-law had been part of a Kannada drama troupe who actually played the troupe in the film; and then I was just inspired by the environment, like the abandoned railway tracks; I wondered what madness could happen there.

Was it challenging finding and casting the right actors for these characters?

Not at all. There’s so many talented South Asian actors out there including Venk Potula, who I’d written the lead role for, and then we only really auditioned for one part. Everything else was just direct offers to actors who we knew would be brilliant in these roles, including some excellent actors in my own house, like my wife Meera Simhan, who played Kamala, and daughter Maya Kapoor, who played Nikki.

You pack lots of references and nods to aspects of South Asian American life. Were there scenes you filmed that didn’t make the final cut?

The opening scene, where we see Vinny selling saris, was originally a longer monologue where he’s describing half a dozen different types of saris. It was really brilliantly played, but it ended up being much shorter after the edit because we needed to speed through the first act a bit quicker.

Have the South Asian businesses that you worked with seen the film? What were their reactions?

Lastly, the inevitable question every filmmaker gets — what’s next for you?

I got some more South Asian diaspora stories I wanna tell. I ain’t done with those yet!

This conversation with actor and producer Venk Potula has also been edited for length and clarity.

Ravi Kapoor wrote and directed the film. How did you get involved?

Ravi is someone I’ve always looked up to. We got connected through an old agent and I would send him short films I made to get his feedback. Ravi and his wife were also in my scripted podcast, “Masala Jones.” Ravi sent me the “Four Samosas” script and asked for my thoughts. There was a character named Venk and I really resonated with the role. He ended up asking me to act and then co-produce the film. Being a producer allowed me to be involved in making the film every step of the way.

How did you relate to your character, Vinny?

After I read the script, I asked Ravi if he had taken some of the conversations we had and wrote about them. He said something interesting, that maybe he and I are more similar than we think. Vinny is a character who has lost his voice and is kind of stuck…I resonate with that feeling. Vinny is heartbroken and I think we all know what that is like.

Who is the ideal audience for this film?

I feel like it’s for anyone who enjoys a heist film and a rom-com. And of course it’s authentic with our South Asian culture integrated in the film. If you like quirky movies, if you like laughter, this movie is for you. I don’t think you have to be South Asian to enjoy it.

Seeing South Asians actors onscreen in an American film is obviously groundbreaking. But as a dark-skinned South Asian, seeing you specifically [Potula is Telugu] with dark skin and non-Anglo features was special to me.

I’m glad you brought it up because it’s such an important topic we don’t talk about. Even within our South Asian community, we don’t see a lot of people with darker skin and the examples of beauty are usually a lighter skin counterpart…like in any Bollywood movie I saw growing up. I’m very happy [audiences will] see that.

How did having South Asians behind the scenes working affect your experience making the movie?

It’s very empowering. There was a comfort, a knowing. You can have conversations you wouldn’t normally have because there you know there is a shared background. As an actor, it is so much easier to be more vulnerable.

“Four Samosas” will be released in theaters in New York and LA on Friday, December 2nd.

This piece is written by Brown Girl writer Sneha Goud in collaboration with Viren Shinde.

Writer Sneha Goud is a second-generation Indian-American raised in the Midwest and working in New York City. She holds a masters in public administration from New York University and works in the public sector. Sneha is an activist focused on South Asian, political, and feminist issues.