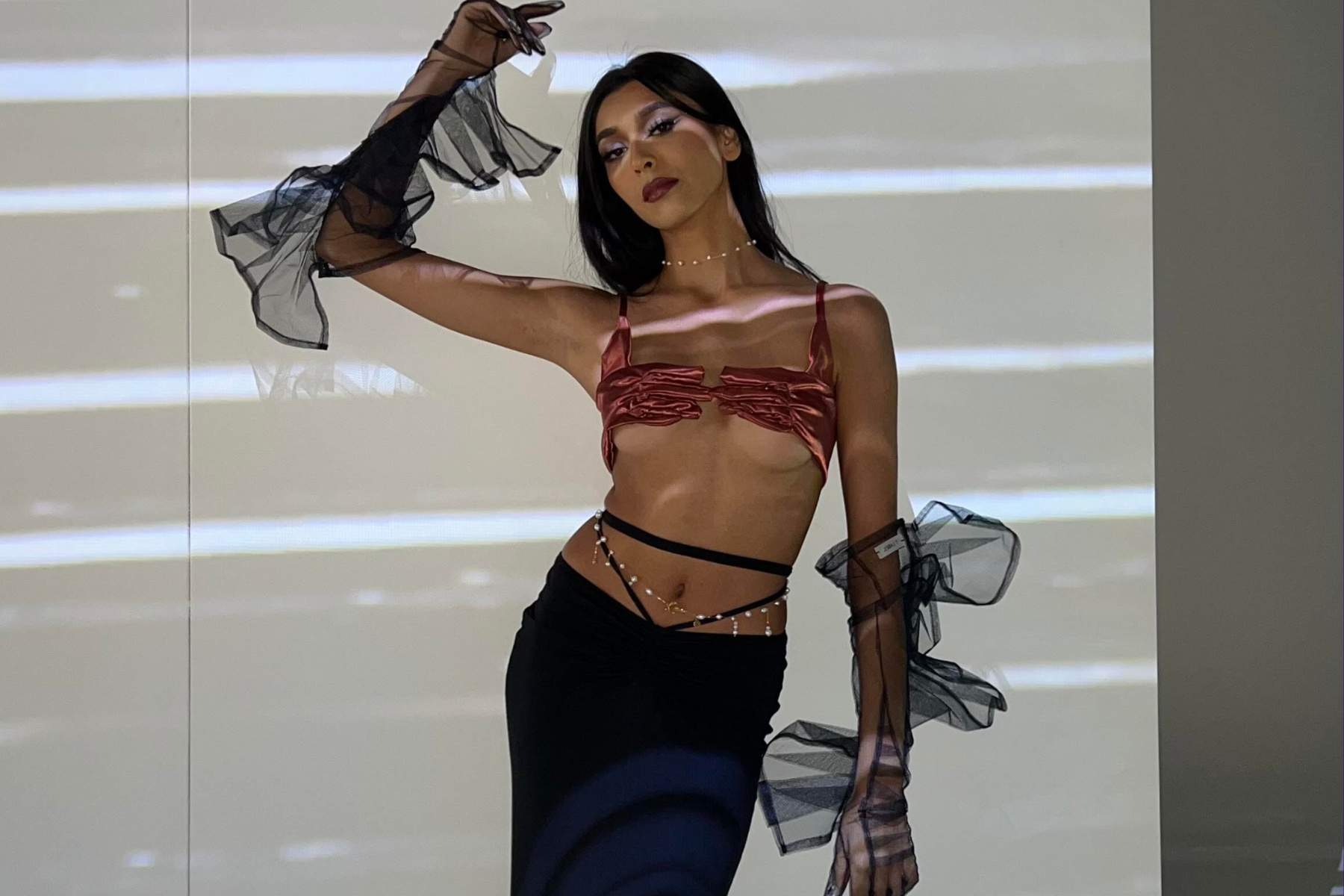 In the TikTok world of redundant dances and #Nosejobchecks, Megha Thakur offers something different. Sometimes it’s advice on how to take a chance on yourself. Other times, it’s a video on how to twerk as a skinny person. The message behind it all is body positivity, no matter your shape or size.

“Behind everything I create, the message is ‘be you, be confident.’ If you can’t be you, you can’t be confident,” Thakur emphasizes. “Every time I make a video I try to be myself, because even if people don’t like it, at least I was true to myself.”

Thakur’s message has resonated with millions of people worldwide. At 20 years old, she is a blogger, model, TikToker and Youtuber. Through her TikToks, which have collectively amassed over 25 million likes, she explores themes like body empowerment, sexuality and self-acceptance through her love for dance and fashion.

Thakur’s TikTok creative journey began in the summer of 2020 at her parent’s house in a Toronto suburb. In quarantine, Megha made the conscious choice to drown out everything going on in the world and exclusively focus on herself, which led to days in bed reflecting. She asked herself questions like “Why am I insecure?” and “What do I actually want in life?” Often accompanied by a notepad or the Notes app of her phone, she broke down everything she had been through in life. She wrote reflections to study all the forces that made her the way she is, starting with her upbringing.

Originally from Madhya Pradesh, India, Thakur migrated to Canada with her parents when she was one year old. At a young age, she faced an identity crisis while deciphering how to adjust to both cultures. This adjustment “wasn’t so much about geographically adjusting, but about doing Indian practices at home and then stepping out to a world with completely different practices.”

Although Thakur was admitted to a prestigious international high school program, she convinced her parents to let her attend an arts high school so she could continue to practice dance.

However, she only saw dance as a creative outlet: “It was a passion of mine, not something I wanted to put my heart and soul into professionally,” she says.

She ultimately decided to study computer science in university because it was a field that would satisfy her father.

“I felt like it was the least I owed him because he let me attend an arts school,” she explains.

Despite diversity at her arts high school, she felt like an outsider. It didn’t help that whenever her culture was represented, it felt superficial. She noticed that her non-Brown peers were always delighted to partake in Bollywood dance classes, but didn’t care to learn about South Asian culture.

Rarely approached by the boys in her predominantly white school, she grew up blaming her race and body type. Additionally, when her friends in high school started exploring sex, drugs and alcohol, she shyly watched from the sidelines.

“I was really uncomfortable with my body, and when everyone started hooking up, my insecurities surfaced,” she laments.

Thakur finally encountered more South Asians in college. She noticed that they identified more strongly with their specific cultural and religious sects. These experiences made her question the role race played in her life. Although she always considered herself as a  non-specific South Asian, when she saw how deeply connected others were to their specific identities and how nuanced it was just to be from the subcontinent, she felt lost.

“Self-acceptance is not as simple as loving who you are. Self-acceptance is breaking down the forces that make you think those things about yourself,” Thakur says. “Whether those forces are unrealistic beauty standards perpetuated by the media or aunties who comment on my weight, the realization that all the stigmas I’ve been fed have nothing to do with me set me free.”

These quarantine reflections led to a routine of positive affirmations to center Thakur and remind her of her purpose, some of which can be heard in the background audio of her TikToks. One such important affirmation to Thakur is “confidence doesn’t come from looks; looks come from confidence.” Whenever Thakur repeats this to others, they retort that she is obviously confident because of the way she looks. “Nah, I look healthy and happy BECAUSE I’m confident,” she answers.

Starting out on TikTok

An avid dancer, Thakur first downloaded TikTok to seek inspiration from dancers all over the world. Over time, she realized the creative freedom the app encouraged beyond dancing. She used trending audio and recorded a TikTok.

The next day, she awoke to four million views.

TikTok became a safe haven from the stress of school. Thakur regularly made  TikToks that reflected her thoughts during her summer in quarantine.

“I had the privilege of making the glass half full instead of empty,” she says.

Thakur frequently highlights skinny shaming, which is the act of deriding or mocking a person’s thinness.

The comment sections of her TikToks urge her to “eat something” and some refer to her as an “ironing board.” Growing up, her friends’ mothers frequently berated her to eat more and joked about her weight. Although she often laughed it off, it led to identity confusion and self-confidence issues.

Thakur is determined to empower people targeted by skinny shaming, she is always careful not to put down another body type to uplift her own. “Being proud of my flat ass has nothing to do with your body,” she declares. In a TiktTok, she shares: “Being skinny is hard. I get body-shamed every day.  I get hate for loving my body, and I get hate for hating my body. Standards suck — love yourself for the way you are.”

Thakur insists she has no target audience in mind for her affirmations. She hopes to reach anyone who wants to make a positive change in their life. She does however keep one audience member in mind when making her videos: her younger self.

“When I make content, I think about what she would want to see at that age. When you make a message you don’t relate to, you have to guess how the audience will react. But when the audience is you, you don’t have to worry,” she adds, smiling.

Because she felt so passionate about the creativity TikTok allows her, Thakur decided to leave university where she studied computer science and business. Putting school on hold gave her the opportunity to reassess her priorities in life.

“The passion I felt for my creative ventures was unlike anything I’ve ever done,” Thakur says.

Thakur will continue sharing her struggles because she believes that somewhere, someone else may be struggling with them too. She is determined to seek them out through storytelling. Her promise to her viewers is she will always be unapologetically herself: “At the end of the day, it’s about being confident in who you are, and this is who I am.”