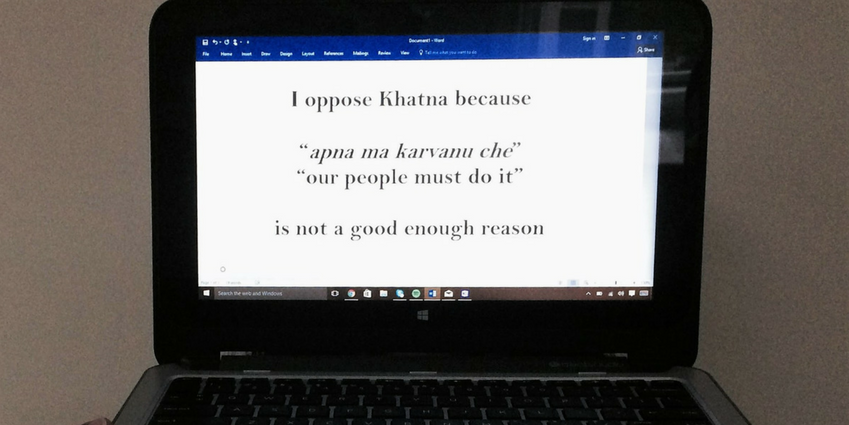 For the record, I have never been mutilated. I am not traumatized, damaged or broken. Yes, something unfortunate happened to me that I wish had not, but I do not want to be labeled a survivor. Personally, I feel the word is inappropriate to my situation because my life was never at risk. What I do want is to live in a world where what happened to me no longer happens to others. The reason I want this is because although I have come to forgive my loved ones, accept what has happened to me, and move past the trauma, not everyone who has undergone khatna has been so fortunate.

Like countless other females raised in the Dawoodi Bohra community, I underwent female genital cutting (FGC) as a young, unsuspecting child. My recollection of the event is foggy, but I do remember lying half naked on the examination table in a pediatrician’s office. I also remember an unpleasant sensation accompanied by a scream and then a calm, comforting voice explaining that what I had just felt was only cold antiseptic.

I cannot recall the exact moment I was cut; I  assume the pain caused me to purge it from memory. However, I do remember the aftermath.  I remember feeling confused and slightly elated at having to wear a menstrual pad like my big sister. Not because I had reached the milestone of menstruation (that would not happen for another four years), but to avoid dark red stains on my underwear as the cut healed. I remember a party a few days later; my markas friends came over for a mithi sitabi. We played games like Twister, Monopoly and Operation—not standard mithi sitabi activities. I’m sure prayer was involved, but I don’t’ remember it. All I can recall is how much fun that day was.

Somewhere along the way, I was left with the notion that what had happened to me, happened to all girls, Bohra or not. As I sit here and reflect, I think I have a reasonable explanation for this. The procedure itself occurred in a medical setting. My parents remained cool and calm throughout the entire event. At the mithi sitabi, I was the youngest; the last girl of the group to undergo the procedure. It all felt so normal. No one needed to tell me that this happened to all girls; I arrived at the conclusion myself. The normalization of this event enabled me to quickly forget about it and continue on with the business of growing up–that is until I reached high school and formally learned about female genital mutilation (FGM) in Africa while sitting in a health class.

That day in class, as I listened to my teacher speak about FGM, I began to feel queasy. How could this happen to women in Africa? My heart ached for them. After school that day I used the internet to learn more about the practice. At the time, I didn’t recognize why this topic peaked my interest. In my mind, these women lived worlds apart from me. We had nothing in common, so I initially thought. I don’t know if it happened that night—it could have been days later—but I eventually arrived at the realization that what had happened to me when I was seven years old was NOT something that happened to all girls. In fact, it was considered a violation of human rights.

I confronted  my mother about it. I showed her documentation confirming that what had been done to me was considered a form of FGM. In an accusatory tone, I asked her why she did this to me. Her response was straightforward and simple: hygienic purposes. I pressed her further but all I got was “apna ma karvanu che,” our people must do it. At some point, I asked her if she enjoyed sex; she told me she did. Although I was still upset, her response brought me some relief.

[Read Related: Bohra Men Speak Out to Save Their Daughters from Female Genital Mutilation]

I grew up in a traditional Dawoodi Bohra family and I underwent khatna. Much to my community’s dismay, neither circumstance prevented me from engaging in premarital sex. Because I have no previous comparison, I cannot say with 100 percent certainty that it is because of khatna, but I am unable orgasm from clitoral stimulation. However, if I had to put money on it, I would. I may look normal down there physically, but from personal experience, I’ve discovered that my clitoris is not a sex organ like it should be. In fact, for me, clitoral stimulation leads to pain, not pleasure. Medically, this is known as allodynia—pain due to stimulus that does not usually provoke pain. My guess is that although undetectable to the human eye, my clitoris underwent nerve damage when I was seven years old. All because, “apna ma karvanu che.”

I don’t want others to read this and feel sorry for me. I have come to terms with what happened to me and I have moved past it. Sympathy is not what I am asking for. What I am asking is that this practice stop. That is why I am sharing my story. I want future generations to be spared.