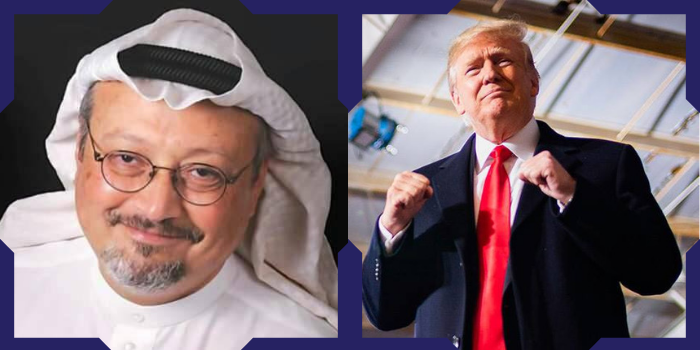 When we delve into the intricacies of our current sociopolitical landscape in comparison to the rest of the world, we find that disputes arise from our tendency to otherize certain demographics outside the United States’ borders. I, myself, ponder over the U.S. construct of foreigners, where we emphasize more value behind the American body than that of the foreign.

On Oct. 2, well-known Saudi Arabian journalist Jamal Khashoggi went into, and never came out of, his country’s consulate in Istanbul, Turkey. Khashoggi lived in Washington D.C. as media advisor to Saudi Arabia’s former intelligence chief and wrote for the Washington Post. Khashoggi’s abduction and murder raised concern from media outlets and other publications, however, President Donald Trump’s response to the journalist’s abduction seemed unconcerned. When asked why the Trump administration has not permitted an FBI investigation to Khashoggi’s—a man who lives “right across the river in Virginia,” as the reporter put it—the president instinctual response was, “he wasn’t an American citizen, for one thing.” Since then, the Saudi government has admitted the premeditated murder of Khashoggi.

Instead of focusing on the alleged government murder of Khashoggi, Trump brought up the writer’s citizenship status as a means to dodge the question. Since Khashoggi was a “foreigner,” he is not worth America’s time, money or thought, in the same manner, an American citizen would be. Compassion, consideration, and commitment to one another have been bounded by our faulty conception of borders that has perpetuated a nationalistic approach to human rights crises. The ideology of claiming that U.S. bodies are more eminent than bodies “belonging” to other countries is inherently undemocratic.

World War II should be a reminder that domestic democracy will not suffice the guarantee of civil liberties and independence. Because of this, the post-war era focused on redefining globalism to endorse an international interconnectedness as assurance for domestic and foreign tranquility. However, 73 years have passed, I am unsure if we have quite succeeded in implementation.

The president of the United States is a self-proclaimed nationalist. Assuming his definition of patriotism for America also means patriotism for the American people – we seem to be living in a paradoxical state. Trump promises the protection of all Americans but disregards to condemn perpetrators of gun violence killing citizens of color, faith or freedom. Trump proclaims to be an avid advocate for freedom of speech, validating white supremacist hate speech, but invalidating the press with daily Twitter rampages. In the time of this extreme partisanship, a universal essence of patriotism has not quite succeeded in implementation in America either.

I have realized the issue of America’s social hierarchy complex is deeper rooted than where one falls on the political spectrum. It resides in the notion of how we view human potential. We respect those who share similar ideologies and can communicate, trade and advance on a similar level. There is a reason why Westernized societies construct modernized versions of the ‘colonial savior’ when dealing with foreign policy in developing countries. Our innate disposition to patronize those who we see as dissimilar to our own subjective meaning of worth and potential not only comments on America’s polarizing political climate, but it also highlights how America interacts with other regions of the world.

Yes, I believe we must once again redefine globalism, where the sole purpose of international interconnectivity is not for political or economic gain but is one that reintroduces love and empathy for one another as a public ethic. This ideal can be and should be implemented within our nation as well.