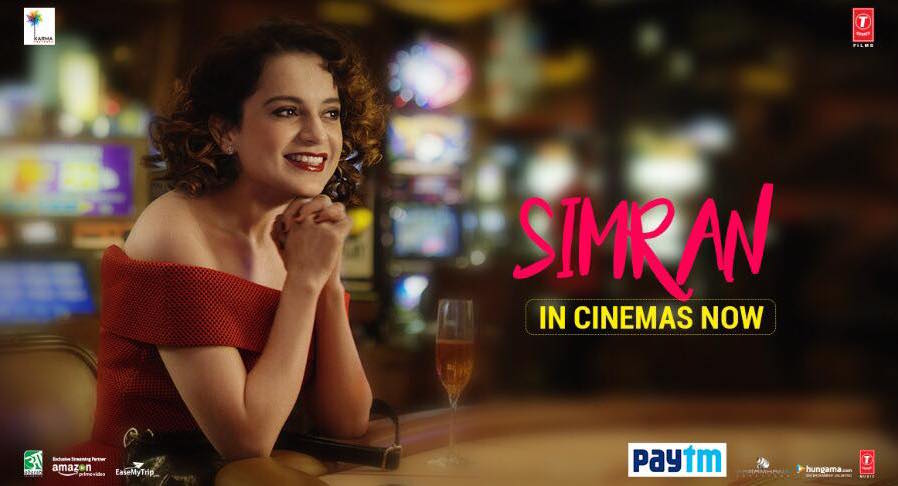 “Simran” is a brave idea for a movie.

I say brave because it ventures out of Bollywood’s comfort zone when it comes to displaying life in America. In “Simran,” starring Kangana Ranaut, we don’t see the shiny world of New York City streets or the loud parties we’re treated to in your typical Karan Johar movie.  We get a glimpse of what it’s like to be your average Indian-American family, struggling to make ends meet. The concept of the movie is unique for Hindi cinema. Unfortunately, the execution of it doesn’t match up.

Loosely based on the life of Sandeep Kaur, “Simran” is a heist comedy that showcases Ranaut’s acting prowess once again, but disappoints because of poor screenplay and writing. Praful Patel, aka Praf, is a free-spirited woman trapped in an unsuccessful career trajectory and barely makes money. She’s a 30 year old divorcee still living with her parents. She works in the housekeeping department of a Hilton in Atlanta. She’s recently dumped her boyfriend Mike, who is also her manager at work and hasn’t gotten over it.

Praf has a very interesting dynamic with her family. Her mother is supportive but her father is incredibly disapproving of basically everything Praf does. They don’t live in a fancy mansion. They live in a modest one bedroom apartment and eat margarita pizzas. She wants to buy her own apartment but her father doesn’t approve of that either, chiding her to marry again.

Things only go from bad to worse for Praf from this point. She goes to Las Vegas with her cousin, Amber, who leaves her alone to have one last fling with an ex. With not much to do in the sin city, Praf resorts to gambling. Her beginner’s luck while playing Baccarat quickly turns her into an addict. She loses not only her initial winnings, but also the money she was saving up for her apartment.

Disheartened, she returns to Vegas on her own only to become basically penniless. Enter Mr. Bugs, a loan shark who lends her money. She’s drunk and sobbing. She doesn’t realize what she’s gotten into. Soon enough, the goons chase her down at home and demand she return their money with interest, summing up to a whopping $50,000.

Praf has no idea where to get that kind of money and as an act of sincere desperation, she steals some cash from a gas station store. On the high of not being caught, she pulls up to a bank. She dons her hoodie. She writes a note with red lipstick. She pretends to have a bomb strapped around her chest. Bam! She robs a bank. Just like that. She does this a few times, learning from YouTube videos as she goes. Praf uses a variety of wigs and costumes so no one recognizes her and gets nicknamed The Lipstick Bandit by the media. 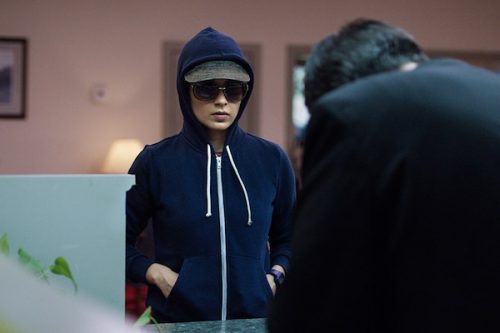 Meanwhile, in an effort to also get some money from her father, she agrees to meet with Sameer for an arranged marriage. Played by Sohum Shah, Sameer is the exact opposite of Praf. The do-gooder, mama’s boy falls for her charms and even though she resists at first, the two fall in love and agree to get married. She even tries telling him about her newfound lust for thieving and gambling but he laughs it off.

Eventually, all of Praf’s vices catch up to her. Mr. Bugs, the cops, her parents, Sameer, it all ends up crashing down on her at the same time, giving us a comedic anti-climactic ending. You don’t always get the happy ending you think you deserved. Real life just isn’t like that.

“Simran” works because it believes in this notion. It believes in giving us a protagonist you can relate to on so many levels. You sympathize with her, you get annoyed by her, you laugh with her and sometimes, at her.

Ranaut does a fantastic job of selling you on Praf and her misguided ideals. Her comedic timing and emotional outbursts are spot on. Hiten Kumar, who plays her father, is excellent at making you sort of hate his character for always berating his daughter but also understand the love from where it’s coming.

What doesn’t work for the movie is the shaky dialogues. The writing just isn’t enough to captivate you. There are bits and pieces of humor but they work mainly because of the actors delivering those lines. The screenplay is equally shaky, which makes the film look disjointed.

The major criticism that “Simran” has faced is the unrealism of its story. It’s natural to assume the police in the U.S. would do a better job of catching a thief pretending to have a bomb and robbing different branches of the same bank, especially if the media is hogging on the story. However, Kaur did the same thing in four banks on the west coast and was actually called The Bombshell Bandit. The movie expands on this but goes a little overboard, blurring the lines between fiction and just overplaying the crazy.

I recommend watching the movie for only three reasons. One, if you want to witness Ranaut’s phenomenal talent. Two, if you’re looking for that two hour escape from your own reality. Three, and this is the most important one, if you want to learn why the movie is called “Simran.” (Hint: it has something to do with a certain famous movie of the 90’s). If it’s a solid cinema experience you’re looking for, however, you may not find it here.