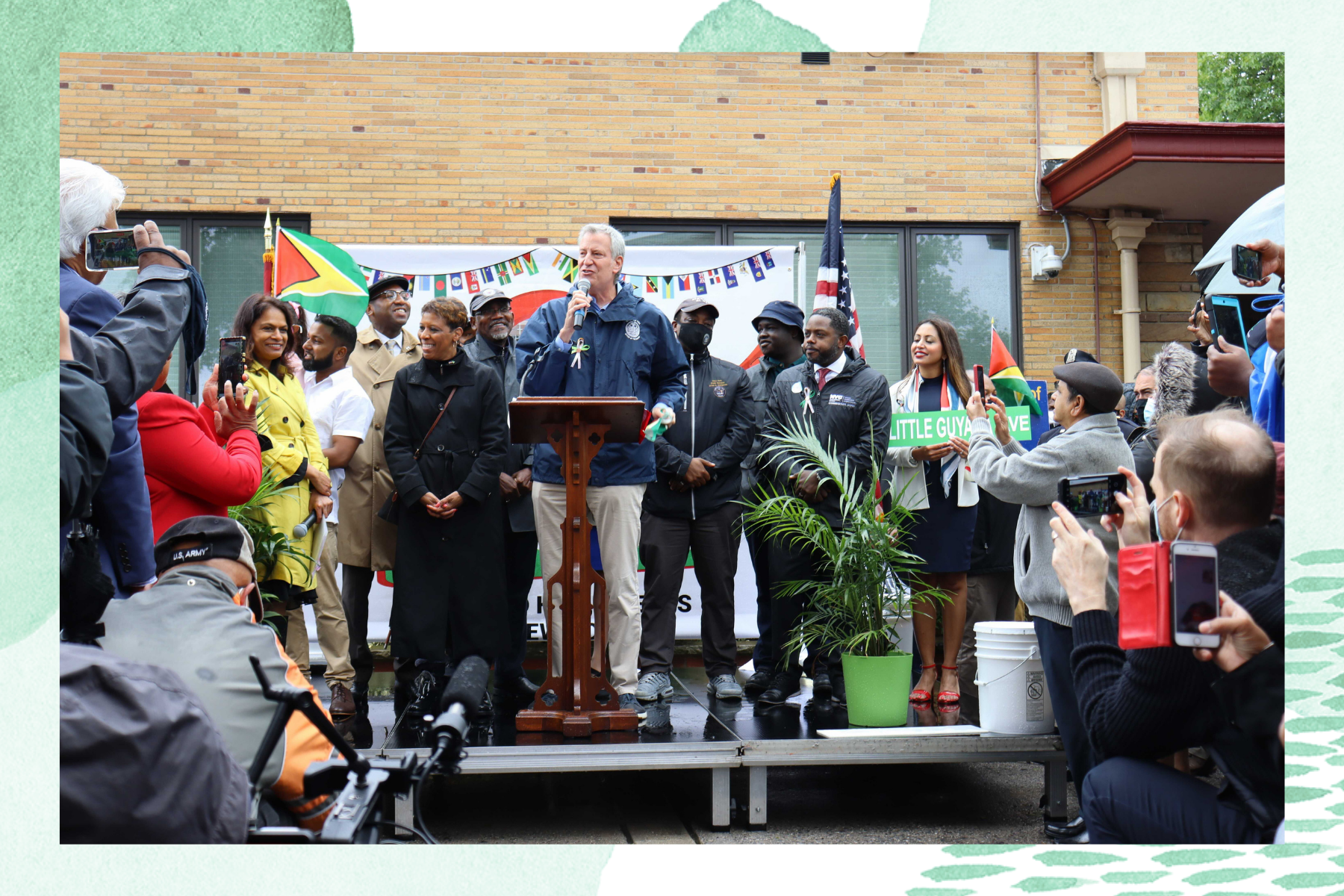 On May 29, a feat that community leaders in Queens, N.Y. had been championing for over 25 years finally came true. The “Little Guyana Avenue” street sign was brought to life at the intersection of Lefferts Boulevard and Liberty Avenue, marking history being made for Guyanese Americans.

Dozens of community residents, organizers and officials gathered at the parking lot of the Leo F. Kearns Funeral Home before heading over to the famous cross street to unveil the long-awaited symbol.

Executive Director Annetta Seecharran of Chhaya CDC and District Leader Richard David both sat on the planning committee in the weeks preceding the naming ceremony.

The event’s date was chosen with special significance as it took place a mere three days after Guyana’s Independence Day and reflects an important month for the Guyanese community. May is also known as Caribbean American Heritage Month.

“As a Guyanese immigrant and someone who lives here, this was a powerful moment, and it was deeply personal. We have a home in New York City with an address. We belong here and our sacrifices are valued both within the community and outside of it,” David said. 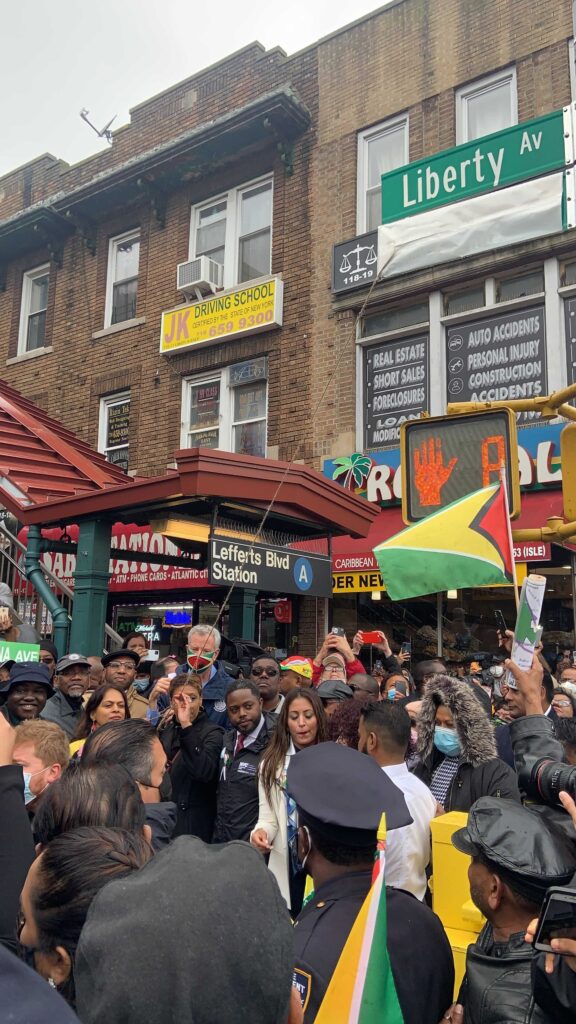 Some officials even represented their Guyanese ancestries, such as Deputy Borough President Rhonda Binda, Sen. Brian A. Benjamin and Commissioner for the NYC Department of Small Business Services Jonnel Doris.

New York City Mayor Bill de Blasio offered a few words at the ceremony, stating he would not miss the day of festivities. He went on to dance on stage to the lyrics of invited musical guest Terry Gajraj, who is best known for his hit song “Guyana Baboo.” After dancing to the Indian-infused music, de Blasio then unveiled the new sign as drums of a tassa band beat in the background.

Councilmember Adrienne Adams and her office offered the green light in officiating the sign and were present to celebrate the accomplishment in District 28.

The Guyanese community in Queens is the second-largest foreign-born group of immigrants, as noted by the last U.S. Census. In relation to New York City, the Guyanese population is the fifth-largest immigrant group.

One event-goer expressed the shared story of many in the area. As a resident of the area for 40 years, she shops on Liberty Avenue each Saturday for the Guyanese products that serve as reminders of back home.

“When we can’t go to Guyana, Guyana come to us,” she said.

David played a leading role in getting “Little Guyana” recognized as an official neighborhood on Google Maps. This allowed the neighborhood to join the likes of neighborhoods such as “Little Italy” and “Little Brazil” in other parts of the city, which have long gained recognition for their nomenclature.

“I’m grateful that our political, business and community stakeholders were able to work together to accomplish this dream,” David said.

With an office located a few blocks away from the site of the Little Guyana Avenue street sign, Seecharran of Chhaya CDC oversees the nonprofit organization that works toward causes for the Indo-Caribbean community.

“As a Guyanese New Yorker, I have personally felt the sting of invisibility. No longer. The official naming of Little Guyana Avenue is profoundly meaningful to me because it means my daughter and every other child from our community can walk proudly in this neighborhood knowing that they belong, that this is their city,” Seecharran said.

In a world where representation matters, the Guyanese community is making headway now more than ever in ensuring their progress and achievements are highlighted and no longer hidden.

If you find yourself in the Richmond Hill section of Queens, stop by to check out the sign located at the intersection of Lefferts Boulevard and Liberty Avenue!