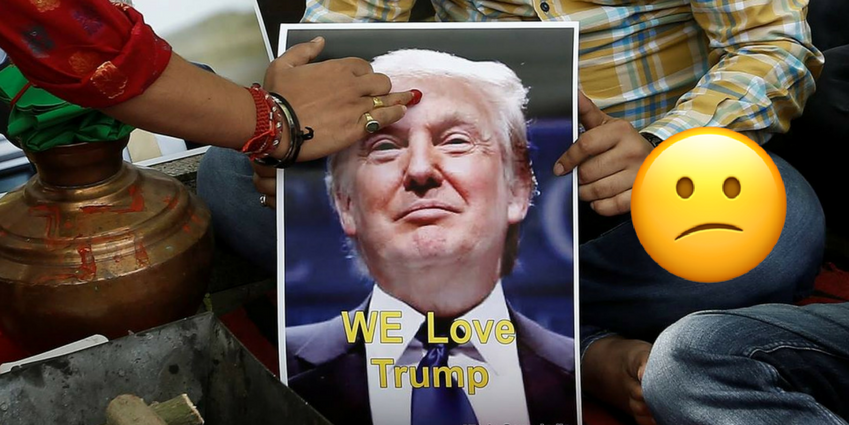 My first introduction to an Indian Trump sympathizer was in October 2015, just three months into my arrival in the United States. I was at a Navratri party hosted by my friend’s uncle, gorging on the mini samosas I’d already begun to miss. As journalism students, my friend decided to do a story on preserving Indian culture in America. While interviewing one of the guests, we addressed the topic of Donald Trump. To our question, he merely shrugged and said, “How does it matter what he says, he’ll be good for the economy.”

While I have no idea whether he cast his vote for Trump a year later, his words remain at the back of my head. When I heard about Hindus for Trump, I am saddened to say I wasn’t surprised. If there was one thing I had noticed about the general Indian population, it was the lack of solidarity.

Fast forward 12 months–I couldn’t sleep for 24 hours after the declaration of America’s new president-elect. The exhaustion of working all night in my newsroom coupled with the shock and denial of what had just happened kept my mind buzzing.

Eight hours later, my roommate–an engineer from Hyderabad– returned from a regular day of work. She couldn’t believe I was still standing straight. “Why do you care so much? How does it matter to you who is the next president of this country?” she asked me.

[Read Related: “Not All Trump Supporters Voted for Racist Reasons” but Here’s What They Did Do]

I am not an American citizen. While her question might seem legitimate to some, I cannot help but wonder where this apathy comes from. Spending a year writing about and filming immigrants and refugees introduced me to an America that I grew to love. My passion for social justice and race issues kept me in touch with “brown” America–a people in whom I could see parts of myself. What made me feel connected to them was an unsaid understanding that no matter what, we’ll stand up for each other in the face of hate. But today, the Indians around me are looking positive, reveling in the fact that Trump “loves” India.

Back home, the age-old anti-Muslim sentiment is rising, partly fueled by the Prime Minister’s silence on communal violence. While Trump might project a similar hatred toward Muslims, I find it surprising that Hindu Trump supporters forget that to the average Trump followers, we are all the same. We are all brown.

I have been fortunate enough to see the other side of this reality, to meet Indians who have raised questions and concerns about what Trump’s administration might mean for people who look like us. But this isn’t enough to mask the reality that thousands of people gathered in Edison, New Jersey to celebrate a man who stands against immigrants.

Today, it breaks my heart to walk past a fellow Indian and wonder if they added an extra vote in favor of man secretly against them. Dear Indian Trump supporter–brown is so much more than just a skin color. It is a calling. It is solidarity. Rise to the occasion.