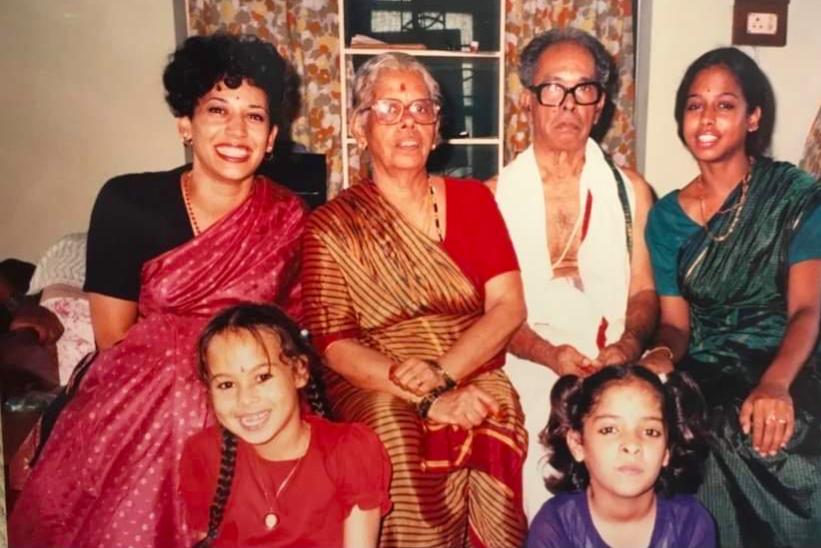 As soon as Kamala Harris’ nomination broke at 4:28PM EST on Tuesday, social media feeds were flooded with commentary by friends, celebrities, and public figures. Many lauded with excitement over the possibility of having the FIRST Black/South Asian American vice president. Posts celebrating the first “Black woman” nominee were also followed by comments like “Hey! She’s Indian, too” and “Diwali is about to be LIT at the White House.”

There was also the occasional, “Does she even identify as Indian?” or “I never see her talk about her South Asian side.” These comments sum up how many in the South Asian community feel about Harris’s nomination: Proud but also conflicted.

From a purely political standpoint, during her time campaigning as a presidential nominee, Harris’s policy stances were already concerning given her tough-on-crime reputation as a prosecutor in California. But adding to this complication is the less-covered issue of her conflicted identity.

The conflict can be masked by the fact that simply having a woman of color in the White House as a symbol is enough. Who cares if she doesn’t identify as South Asian— at least there’s one of us up there! She is certainly a far cry from a Bobby Jindal or Nikki Haley — who were so desperate to separate from their South Asian heritage that they actually changed their names. At least we’re not dealing with a “Kelly Harris.”

My dad sent me this. It looks like it could be straight from our family photo album. Nope, it’s just a piece of American History. pic.twitter.com/oNDXTwBVJu

But underneath this desperate cry for optimism is the disappointment of watching Harris ignore her South Asian heritage. Harris was born to Donald Harris, a Jamaican immigrant, and Shyamala Gopalan, an immigrant born in Chennai, India. Except for the fun cooking video with Mindy Kaling, it seemed like Harris rarely acknowledged her background when describing her family and upbringing. Many children of South Asian immigrants have struggled with understanding her hesitation to own her background because heritage is such a big part of growing up as first-generation Americans. Whether it is as benign as “Where are you from?” or as disturbing as “Go back to your country!”, South Asian Americans are made well aware of their cultural identity. Many wonder if Harris can relate to this. But, hold on, we know it is more complicated than that.

Harris is more vocal about her Black identity. She speaks often about how her mother raised her to be aware of her race. In her biography, she writes,

“My mother understood very well she was raising two Black daughters. She knew that her adopted homeland would see Maya and me as Black girls, and she was determined to make sure we would grow into confident Black women.”

Identity is truly intersectional. Harris’s experience as a Black woman in America has likely shaped how she identifies. Unfortunately, it has been compounded by the fact that she may not have been accepted in the South Asian community as a half-Black woman. It is understandable for someone of mixed ethnicity to feel conflicted or be told that they are not “[insert identity] enough.”

.@KamalaHarris‘ South Asian roots and why they matter, from @mitrakalita https://t.co/AvlnDUNzni

Yet, Harris’s lack of acknowledgement of her Indian heritage is disappointing because, whether she wants to or not, she is a public figure representing South Asian womxn. Part of the responsibility of being “the first” is being able to navigate the complexities of her identity, especially when so many young girls look to her for inspiration. By not acknowledging that side of her background, South Asian womxn are missing out on the much-needed representation in Harris.

No one is asking her to pick. It’s a critical time in our country’s history where race and identity are at the nexus of what American politics will look like moving forward. It is only then natural to expect Harris to open up and share the full breadth of her experience — the good, the bad and the ugly.

Here is what we are asking for: vulnerability. Harris has a deeper story to tell. She must share her experiences that form her identity if she identifies with it at all. The risk of not sharing this part of her weighs more now than ever because representation is everything.

Still, a choice has been made and *all of us* are responsible to keep pressing for the policy we need, the wins we need, and free the right to vote for everybody, everyday.

— brittany packnett cunningham does not do remixes. (@MsPackyetti) August 11, 2020

Harris’s ability to navigate these complexities will be indicative in part of her strength as a leader. Though in some ways, those very complexities may be what makes her most relatable to South Asian Americans. People are capable of holding multiple truths and experiences at once. We can expect Kamala Harris to own her full story while also celebrating her nomination as a clear victory for womxn of color.