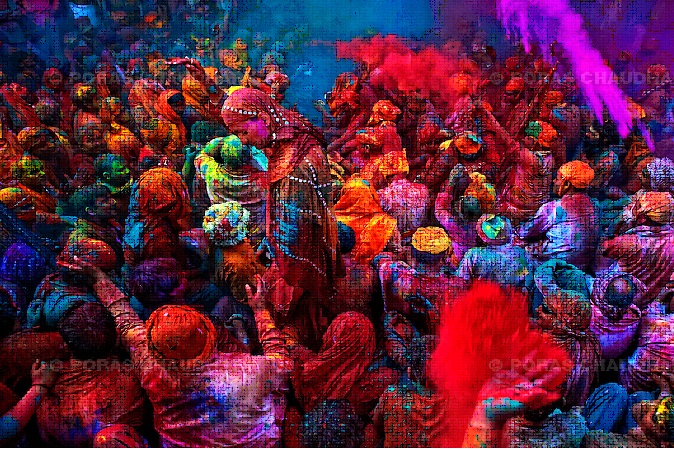 On behalf of BG, Happy Holi everyone! Holi Hai!

Before you all run outside and throw colored powders and water all over unsuspecting bystanders, let’s take a moment to understand how the Hindu festival of Holi originated.

As many may already know, Holi is the celebration of the arrival of spring and the festival of colors, but there is so much more to this joyous holiday. The festival is celebrated in four major ways, and each was created by a Hindu legend:

A demon king named Hiranyakashyap commanded that every person in his kingdom worship him as though he were a God but his son, Palhad, refused and chose to become a devotee of Lord Vishnu. Hiranyakashyap could not stand the insolence and tried to kill Palhad, but the boy was saved by Lord Vishnu himself every time. Finally, he asked his evil sister Holika to walk into a fire holding Palhad for Hiranyakashyap knew that his sister had a boon that made her immune to fire. Holika did not realize that her boon against fire only worked if she was caught in a fire by herself. So

she was punished by being killed while Palhad, who sat chanting Lord Vishnu’s name, was unharmed. For this triumph of good over evil, Hindus burn Holika effigies in giant bonfires.

From a very young age, Lord Krishna was a prankster and popular with the ladies, but he always had his eye on one particular girl: Radha. He used to complain to his mother that Radha had such a fair complexion but he was so dark. So as a joke, his mother suggested one day that he change the complexion of Radha’s face to whatever color he liked. Krishna, being the prankster he was, decided to throw colored powder and used colored water jets on the girls, including Radha. To this day, people wear light colored clothing and use colored powders and water jets filled with different colors to stain each other’s outfits whatever color they desire.

The Kingdom of Prithu was being terrorized by an ogress named Dhundhi. The ogress had a boon from Lord Shiva that she could not be killed by gods, men, extreme heat or cold, or rain. However, Lord Shiva also cursed her by saying that her one weakness was the abuses and pranks of young boys. So the legend states that in the season between the cold and heat, the boys from the kingdom came together to chase away Dhundi through verbal and physical attacks and pranks. That is why children are allowed and encouraged to pull pranks and are forgiven if they yell abuses on the day of Holi.

Lord Shiva renounced his work for the world after the sudden demise of his wife, the Goddess Sati, and slipped into a trance of meditation. Due to this the earth’s balance soon began to fall apart. Sati was then reborn as the Goddess Parvati and tried everything she could to wake Lord Shiva out of his trance but was unsuccessful. Desperate, she ran to Indian cupid-god Kaamadeva who shot his arrow at Lord Shiva. Angered and disturbed out of his meditation, Lord Shiva incinerated Kaamadeva. For this sacrifice, South Indians offer sandalwood paste for Kaamadeva’s burn and his favorite mango blossoms on Holi.

Other parts of the Holi celebration include delicious snacks, the drinking of bhang, which is a beverage made from the female cannabis plant mixed with milk and spices, and much more. After all the craziness- and slightly buzzed feelings- of the day, people change into nice clothing and enjoy what is called a “sober evening,” where gifts are exchanged and social gatherings.

This year, Holi, Purim, and St. Patrick’s Day all fall around the same time. How you wish to incorporate these holidays together is up to you, but no matter what, stay safe and enjoy these joyous celebrations!