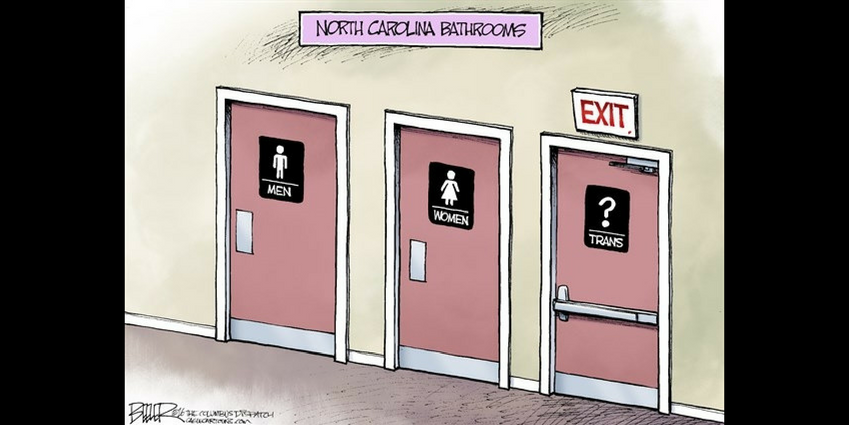 Last week, a deal to end the North Carolina law currently requiring transgender people to use public restrooms corresponding to the gender on their birth certificates, failed in its efforts to repeal.

The NC HB2, or “Bathroom Bill,” was passed earlier this year after Charlotte officials approved various anti-discrimination ordinances. The law excludes people who identify as gay, lesbian, bisexual and transgender, from state anti-discrimination protections enabling policies that order transgender people to use bathrooms and showers that align with the sex or gender given to them at birth.

According to the San Francisco Chronicle, the repeal compromise touted by both Democratic Governor-elect Roy Cooper and GOP Gov. Pat McCrory called for Charlotte to do away with its ordinance, in exchange for lawmakers to undo the LGBTQ law.

Cooper stated, that he and his staff worked longer than a week to create a platform to repeal the law with lawmakers from both parties, as well as industry and LGBT leaders. However, both sides were left short, unable to commit to their promises, leaving the repeal to fail.

“I’m disappointed that we have yet to remove the stain from the reputation of our great state that is around this country and around the world,” Cooper said.

Both Democrats and Republicans continue to blame one another for the failure of the repeal effort.

Conservatives spoke in favor of the law and bathroom requirement, claiming it was necessary to prevent heterosexual predators from masquerading as transgender to hurt young girls, as well as to protect the privacy of children in private rooms.

“We continue to encourage our leaders to never sacrifice the privacy, safety or freedom, of young girls by forcing them to use the bathroom, shower or change clothes, with grown men just to satisfy the demands of greedy businesses, immoral sports organizations or angry mobs,” North Carolina Values Coalition Executive Director Tami Fitzgerald said in a statement.

But, the U.S. Justice Department and others have verified that the threat of sexual predators posing as transgender persons to enter a bathroom is practically nonexistent.

If successful, repealing the state law could have potentially ended legal challenges faced by the federal Justice Department and transgender residents. Litigation is said to have been delayed due to the U.S. Supreme Court also addressing a separate Virginia case on transgender restroom accessibility.

In a release, Human Rights Campaign President Chad Griffin said that this law will continue to burden Republicans until fully repealed and ended.

In the midst of it all, a South Asian LGBTQ ally is found as State Sen. Jay Chaudhuri, D-Wake, also spoke on the senate of the North Carolina General Assembly in favor of the repeal of NC HB2.

Chaudhuri refers to himself as a progressive problem solver leading the fight to protect a woman’s right to choose, push for stronger gun control laws, and is always standing up for North Carolina’s children and families. Hopes of South Asian presence in critical decision making and political involvement is beginning to thrive.

Another issue affects the LGBTQ community, as Amita Swadhin has testified against Sen. Jeff Sessions. Senate Democrats had recently called Swadhin to testify against Sessions, whom many believe would threaten the safety and well-being of rape victims and the LGBTQ community if confirmed as attorney general.

“As a bisexual woman with a transgender romantic partner, and as an advocate working to support sexual assault survivors in the LGBT community, the prospect of Senator Sessions as attorney general is personally and professionally alarming,” Amita Swadhin, a survivor activist for LGBTQ victims of sexual abuse, said.

Swadhin was called to testify on the second day of hearings on Mr. Sessions’ nomination, recounting her rape as a child by her father.

Her testimony is said to have sharpened the point of the attacks on Sessions, a former U.S. attorney labeled a racist, sexist, anti-Muslim bigot and homophobe by Democrats.

Swadhin stated that Sessions is unfit to serve as attorney general, referring to his dismissive comment regarding the 2005 recording of President-elect Donald Trump which stated that his status allowed him to kiss and grope women, as well as his votes against the Violence Against Women Act. Sessions told the committee that although his initial reaction may be seen as dismissive, he does consider forcible kissing and touching to be assault.

“We need a justice department that can be a partner to families and communities. Our attorney general must be able to demonstrate leadership to victims of violent crime that helps us feel we can trust the state, the courts, and victim service agencies more than we fear our perpetrators,” Swadhin said. “For most survivors of violent crime, this means trusting the state more than you fear the family member, friend or community member who you trusted and who raped or abused you.”