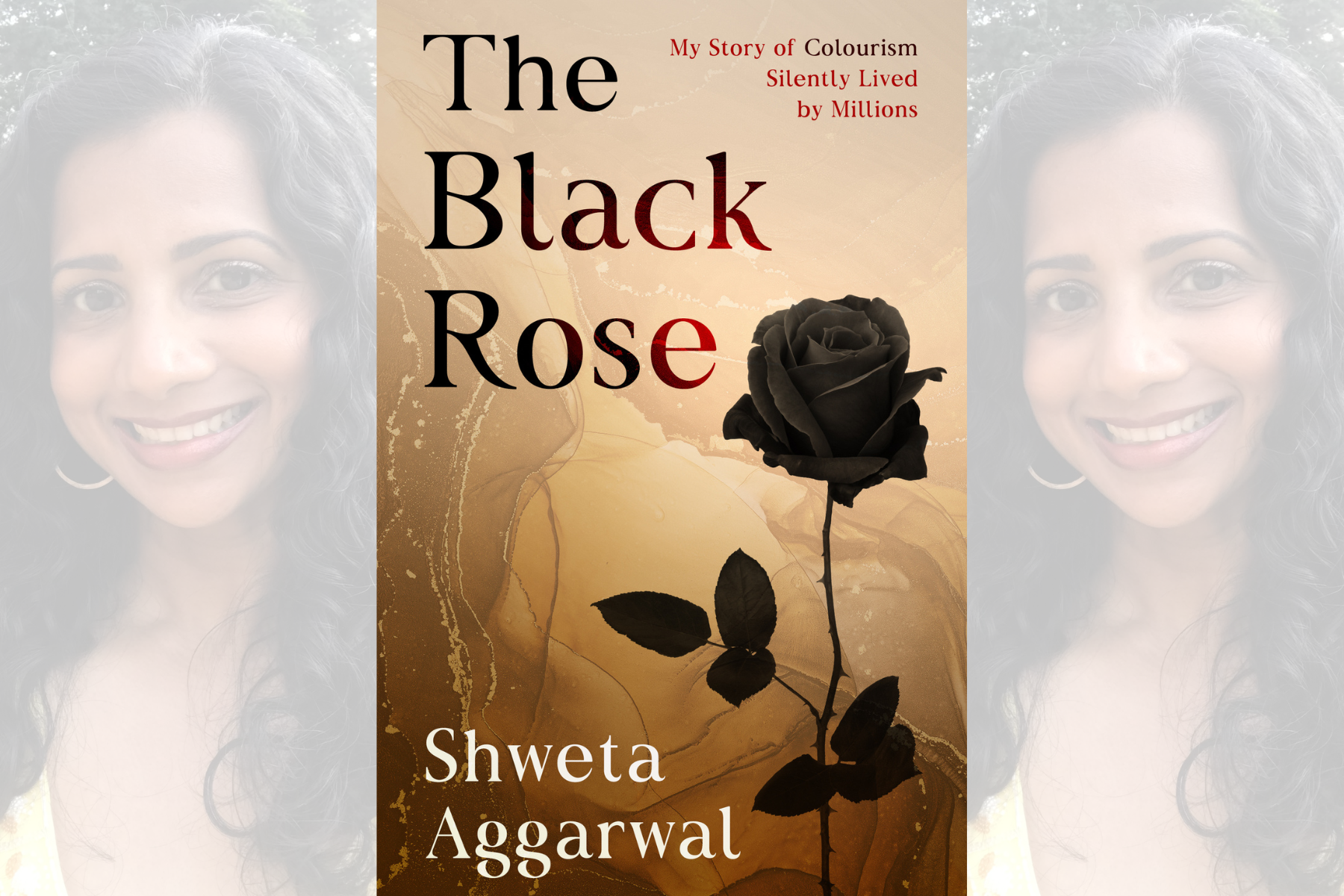 I was a mere 14-year old on the fateful night of 22 April 1993. The night that witnessed black teenager Stephen Lawrence brutally murdered in a racially motivated attack as he waited for a bus. The night that cemented my fear, that the colour of my skin does matter. The same night that confirmed my indifference as a British Asian in the United Kingdom — were we really united? Fast forward to May 25 2020, the murder of African-American George Floyd by a white policeman was the turning point for British Asian author and my lovely friend, Shweta Aggarwal to finally break her silence and narrate her story of colourism, in her new book, “The Black Rose.”

Aggarwal’s gripping memoir emits so many emotions; that of an awakening, a voice that has been suppressed for years, filled with anger, mistrust and guilt. But most importantly, “The Black Rose” successfully disrupts the narrative that consistently allows society to box someone as indifferent based on a visibility factor. For Shweta, this factor was the colour of her skin. The injustices she consistently endured via some family members and fellow South Asian peers throughout her life, was as a result of her skin tone failing to qualify as ‘acceptable’, or as she often quotes in her book, not ranking high enough on the ‘fairometer.’ Whether she was in India, Japan or London, the scale was never too far behind.

[Read Related: Liam Neeson’s Week of Rage is Every Person of Colour’s Truth]

Within the first chapter, she recalls as a child in India, the distinct lack of subtlety displayed by certain family members through direct taunts of her duskier appearance in comparison to her parents. She realised that she wasn’t in complete isolation from this prejudice, as her maternal aunt and uncle were also harshly nicknamed on the basis of their skin colour — Kaali (black) and Savla (wheatish). Aggarwal was left mortified by what many South Asians sadly still continue to casually exercise. Echoing similar incidents within my social proximity, it’s infuriating witnessing the recipients of such remarks surrender to laughing at themselves too.

Except it isn’t funny. Born into a culture where conversations on religion, caste and hierarchy in India are still so prominent, the comparison of Aggarwal’s skin colour being as dark as that of the domestic help (often from poorer families), prematurely planted seeds in her mind that she simply didn’t belong with her family, especially  when she was sent to boarding school. Her lack of self-worth coupled with these taunts, gave her a whole new vocabulary for the letter B, that grew in parallel with the ongoing prejudice and anxiety. B for blackie, beggar’s child, bedwetter! Not funny, but derogatory. Post her book launch that Brown Girl Magazine attended, she tells me,

I personally feel we are way behind when it comes to understanding the importance of mental health. Name-calling was normalised and if you objected, you were ridiculed further with remarks such as ‘So sensitive! Can’t you take a joke?’ Body and colour shaming can lead to a feeling of inadequacy in the victim, which can further lead to depression and much worse mental illnesses.

During the 1984 Hindu Sikh riots in India, where over 3000 Sikhs lost their lives, Aggarwal recollects the frightening moment when she and her classmates fled into hiding to escape the violence during a school trip. As a means to save all the students from harm, the Sikh boys were forced to remove their turbans and long hair — their visible identities stripped to keep them alive. Yet, ironically, even in this horrifying situation, Aggarwal felt least at risk, attributing this self-assurance to her darker appearance.

The crux of her self-loathe was the love-hate relationship she formed with skin whitening creams. The birth of Fair and Lovely, India’s most renown brand (now known as Glow and Lovely following a backlash) was notorious for selling the damaging message that fairer skin equated to a happier and fulfilling life. For it was fairer skin women that would qualify for marriage — clearly their only sole purpose!

Tactfully using famous fair-skinned Bollywood actresses in television ads and posters, their so-called perfection would scream out to vulnerable young girls. (Men were targeted much later on, but the importance seemed less). Akin to the wretched beach body posters plastered on every corner in January — because apparently bikinis only look good on a certain body type —  the damaging message remains the same. Social acceptance comes at a cost, and that cost is to look a certain way.

It’s an extension of the dated methods imposed on women from the womb, where mothers are lectured on drinking milk with saffron to ensure the baby is fair, traditional matrimonial sites asking women to specify skin colour, and women being told to stay out of the sun. These socially ingrained views are eventually developed into modern day methods in the form of cleverly marketed consumables. Aggarwal admits,

Most people only use the cream on their face just as I did. At that time, I didn’t even think about the rest of the body. I felt that if the face becomes fairer, that will be enough for acceptance. My mum noticed the difference for sure and I was lighter by the time I met my husband, Amit. I must admit the addiction is a combination of three factors: the justification in your own head, the strong marketing message that ONLY fair is beautiful, and the ‘compliments’ from those around you.

I admired Shweta’s honesty on admitting what essentially was a dangerous obsession that she remained faithful to throughout her teenage and adult life. A ritual that, whilst prompted gradual results in her appearance, was never going to eliminate the insecurities she felt within herself. Moments of joy with her husband and children on holidays abroad, would be broken up by the need to ‘fix’ any damage the sun may have inflicted i.e. reverse her tan. The booming tanning industry in U.K., her now home, and admiration of her ‘sun-kissed’ look by Brits initially surprised Aggarwal — as if her colour had now gained acceptance.

But who are we seeking acceptance from? A society that is still deep rooted in patriarchy forcing women even now to adhere to dated rites of passage that holds no relevance? Or a society that seeks to point out one’s indifference because of how they look — their skin, their religious attire, their weight? Or a society that passes judgement on a woman’s self-worth, and continues to abuse that same woman behind closed doors under the eyes of Goddess Kali? Aggarwarl goes on to explain,

The more damaging perceptions of colourism, are that ‘fair is rich’, ‘fair is successful’ and ‘fair is better educated’. Essentially, ‘fair is supreme’ in every sense. And if that’s the case, where does that leave dark-skinned people? In Ukraine, for example black and brown people were discriminated against and  not given a fair chance to save their lives. Is it fair to be denied a basic human right — survival — based on your colour?

I personally was curious to know from my family what the definition of prejudice in the Hindi vocabulary is and how it is/was applied to in India. “Pakshappat” (taking sides) or “poorva dhaarna”, were the closest pure Hindi definitions known to my cousin, yet rarely used. However, my dad stated that “hum bedh bhau nahin hai” was the common term used to state amongst family and friends when someone was not biased and believed in equality. Somehow, colourism never really came under that category. A sentiment echoed by some of my Chinese and black friends . Even in parts of China and Africa, the belief that darker skin is perceived as inferior, is accredited to stereotyping certain groups of people as manual labourers working under the sun, and therefore of a lower class or caste. Does Shweta believe we can change this attitude?

A couple of my aunts are still reluctant to help me with my mission. One even said ‘it’s pointless fighting it’, while one said, ‘everyone has the right to define beauty for themselves and being fairer is what beauty is for some.’ The problem with this is that people then start to look down on people who aren’t. Colourism, casteism and classism divide people, creating more unrest in society. If we continue to aspire to be fairer, we’re still encouraging white skin privilege, and encouraging colonial values. The more we allow ourselves to succumb to these social constructs, the more enslaved we feel internally. Melanin is crucial for protecting our skin against the harmful radiation of the sun. Feel blessed that you have it and wear it with pride!

I wonder how we can dare to walk shoulder to shoulder with our black friends in the Black Lives Matter movement, if we refuse to face up to our own biases against colour? We seek equality in the U.K., but deny our deep-rooted prejudice, whilst a white privileged man lectures the world on the difference between racism and unconscious bias (yes Prince Harry, I’m looking at you!). “The Black Rose” has paved a way for many more voices to speak out against the damaging impact of colourism, and in my view, rightly belongs under the definition of prejudice in the collective South Asian vocabulary.

“The Black Rose” is available to purchase on Amazon.

How the Teachings of Ayurveda can Empower Women’s Well-being