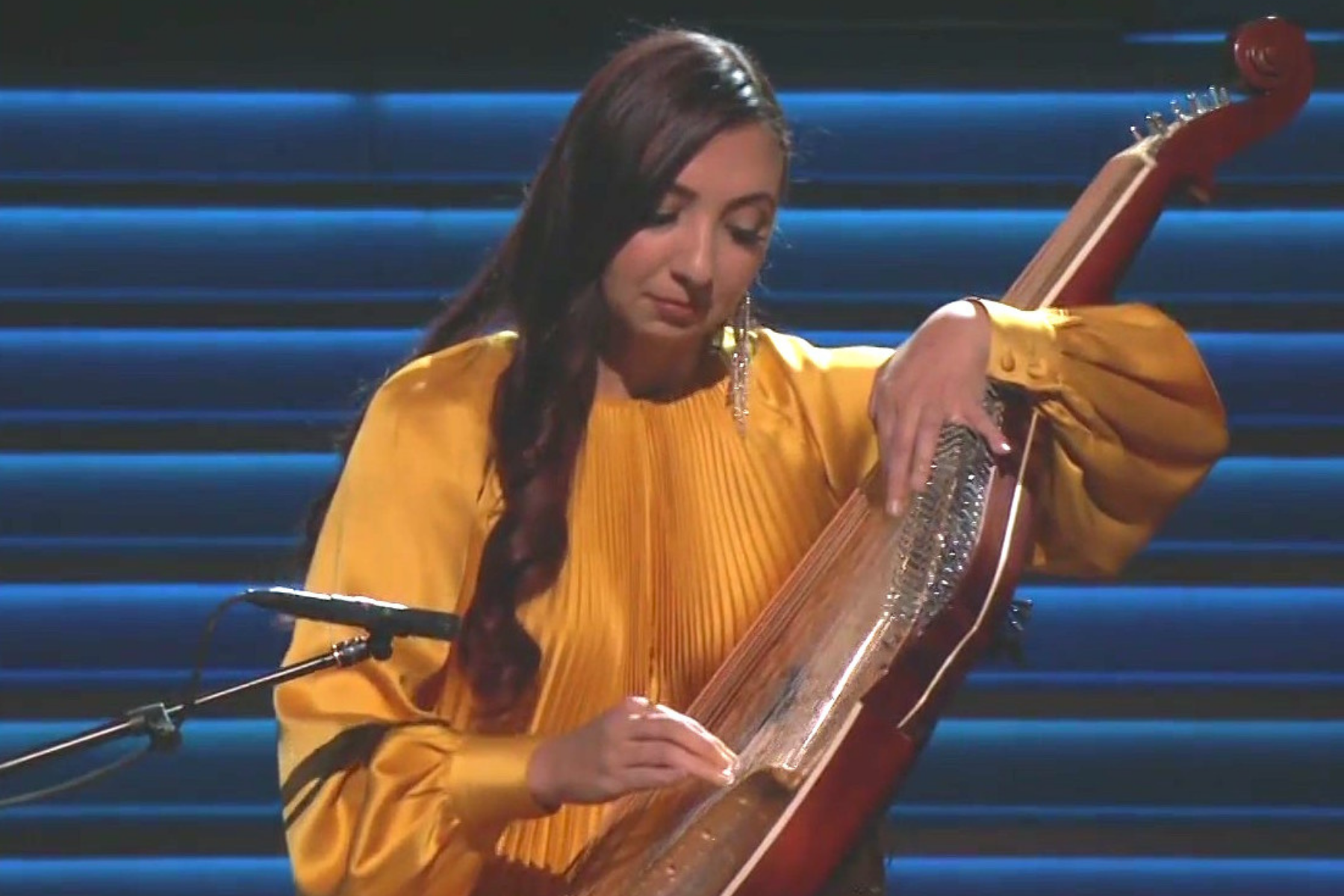 Siuzanna Iglidan is a Ukrainian-American artist, awarded musician, opera singer and much more. Her journey did not come easily as many did not believe in her at the start. Frequent comments she received were “It’s very difficult for immigrants to be successful.” Despite that, Iglidan thrived and was the first Ukrainian female producer to create classical concerts for the city of West Hollywood, and created a nonprofit called Global Musical Bridges devoted to popularizing the future of classical music internationally. Iglidan also established two international competitions in the United States: a piano competition in Los Angeles dedicated to Russian composer Sergei Rachmaninoff, and a classical singing competition in Denver, Colorado. Her goal for both competitions was to support talented young kids by motivating them to perform and by creating opportunities for them to express themselves on big stages.

Iglidan not only plays the Ukrainian instrument called the bandura but also sings opera and pop as a gorgeous mezzo-soprano. After appearing at the Grammys in 2022 with John Legend, and considering her classically trained background, Iglidan is eager to collaborate with musicians of different genres. She would love to collaborate again with John Legend, as well as with Andrea Bocelli, Josh Groban, Lady Gaga, Celine Dion, The Piano Guys and more. Continue reading to learn more about this incredible individual’s story.

Our conversation began around the topic of the Ukrainian instrument, the bandura. I was very excited to learn more about the history of the instrument as I also created a blog post entitled South Asian Music History. Through dedicated research, I found patterns of how modern day musicians have been influenced by South Asian music. Ravi Shankar exposed Western audiences to Indian Classical music through performances at the Monterey Pop Festival in 1967, the Woodstock Festival in 1969, as well as many other performances. We heard the sounds of South Asian instruments such as the sitar, sarod, tabla, tambura, taal, dhol, mridangam and more influence and inspire musicians around the world. Artists like The Beatles were some of the first Western musicians to incorporate South Asian instruments into their music from the sitar, tambura and tabla. George Harrison played the sitar on their song “Norwegian Wood” and even took lessons from the sitar virtuoso and composer Ravi Shankar later on in his career. By absorbing all of this information, I was very keen to learn more about the history of the bandura in particular. It is a unique instrument with a melodic and versatile sound and a distinctive look — like the sitar, it could become the next “cool” instrument (even among Gen Z) to be incorporated in pop music, especially since it is a traditional Ukrainian symbol of rebellion and freedom. Iglidan provided me with a short history lesson along with her experience.

The bandura is a traditional Ukrainian instrument. It first became popular in the 16th century and was known as the kobza, which was a smaller version of the bandura with 12 strings.

Historically, men played the kobza. Cossack soldiers were early kobza players, and later blind men became the traditional kobzars and would play and sing songs while sitting outside of church gates. Today’s kobza is still usually played by men, even with the evolution of the bandura.

The bandura is a combination of a Greek lute and harp. It appeared in the 18th century when the kobza was modified: musicians slowly started adding more strings to the instrument, going from 12 to 14 to 50 strings and more. My personal concert bandura has 61 strings.

The bandura originally started as a folk music instrument. It was used to perform historical songs and sacred music such as the Psalms of David from the Bible.

In modern times, the bandura is taught in colleges and universities, and is used in a variety of genres such as jazz, classical, and others.

Our conversation moved on to Iglidan talking about her love for the bandura. I myself have also been a part of an orchestra and wanted to get a sense of how she fell in love with the instrument.

I started writing my own music at the age of 10. At the age of 12, I was introduced to bandura when I heard it in an ensemble. I really liked the sound — it sounded heavenly to me — and I told myself that one day I would learn to play the bandura. And it happened.

By the time I was 15, I chose to become a professional bandura player and later became a student at a music academy. I now have a master’s degree in bandura. Bandura is my soul.

We moved on to talking about the mentors Iglidan had along her musical journey.

I was lucky enough to have three wonderful mentors. I met them throughout music school when I was a teenager and at music college as a young adult. My last mentor was Nina Morozevich, a professor at the Odessa State Conservatory.

Iglidan dug deeper into her musical background. She explained to me that she started as a classical pianist and learned to play the bandura and sing as well.

I was trained as a classical musician and specifically as a pianist. Since I like to make transcriptions and arrangements for piano, I also learned to make arrangements of Haydn and Bach for the bandura.

I was required to sing and play the bandura simultaneously in my musical training program. The bandura is different in that you must do two jobs at the same time: be a vocalist and an instrumentalist.

In my program audition, the coach said I had a powerful and beautiful voice but I needed to work on it. I was lucky to take my vocal lessons at an opera house. I was exposed to so many beautiful singers through rehearsals and by attending many opera performances.

Iglidan discovered her beautiful and powerful voice through five years of training.

[Read Related: The Authenticity and Individuality of 88rising’s Niki]

Historically during interviews, I have asked musicians who they look up to. Iglidan provided me with some of her idols and favorite musicians from the classical world and the pop world.

In the classical field, and specifically in opera, my favorites are Pavarotti and Maria Callas. They are my idols, and I wish I could be somewhere close to them in terms of a level I want to reach. In pop music, I adore Lady Gaga, Fabian, Celine Dion and of course John Legend.

Seeing Iglidan perform at the Grammys was inspiring and mesmerizing. We moved on to talking about how the Grammy gig came about.

Don’t ask how they found me, it’s a mystery! I did not audition or apply for the Grammys. I was invited as a special guest performer. They gave me a call and said, “We would be honored to have you join the Grammys stage this year.” And of course I said, “Yes, and it would be MY honor!”

It was an honor to perform FREE tonight along with Lyuba Yakimchuk, Siuzanna Iglidan, Mika Newton, and our incredible choir. pic.twitter.com/7zYHep1mJG

Iglidan elaborated on what it was like to perform at the Grammys alongside John Legend, Mika Newton, Lyuba Yakimchuk and a choir.

It was a great experience. I really enjoyed working with everyone involved in that performance. John, Mika, Lyuba, the choir and all the team were amazing to work with, very sweet and highly professional.

John himself is a very cool guy. We had a moment to talk and discuss the best course of action for the performance. Since the piece was not initially composed for bandura and a Ukrainian singer, we looked for ways to collaborate to make it sound beautiful.

I did not know what it would be like to be on stage with him. It ended up being a very lovely moment of collaboration. I have such new respect for John both as an artist and as human being for wanting to make such a powerful and heart-felt statement about the war with his song. And the song itself is incredibly moving and supportive for people everywhere who experience war.

We continued our conversation about Iglidan’s thoughts, feelings and emotions representing Ukraine on the world’s stage after President Zelenskyy of Ukraine spoke.

It felt amazing to represent the whole country and all Ukrainians. I was just lucky to be on that stage and I feel lucky to be invited.

When I saw the standing ovations, I felt like I was carrying all Ukrainians on my shoulders. It was a very hard moment. The ovation didn’t seem like it was in honor of my talent or hard work, it was in honor of Ukrainians everywhere. And I felt deeply honored that I could stand there and show who we are as Ukrainians. That the whole world could see who we are.

Iglidan represented Ukraine in one of the biggest beauty pageants in the United States. She started her modeling career in Los Angeles. I decided to ask her how she balances her creativity in terms of music and fashion.

I was honored to represent my country amongst 75 other contestants in that pageant. In terms of balancing creativity, I think if you’re an artist, then you’re an artist in any field. Music and fashion work beautifully together and are connected in every way. Being a musician is being an ambassador of beauty.

In conclusion we ended with Iglidan’s message to the people of Ukraine.

While I’ve been performing during this difficult time for Ukraine and my people, I’ve started realizing how many people are appreciating the gift of life. A lot of people support Ukraine and Ukrainians.

I want to share this message with Ukrainians everywhere: you are not alone. If you are facing difficulties, or must hide and struggle, just know that a lot of people are praying for you. So many people are wishing for peace in Ukraine. You are not alone.