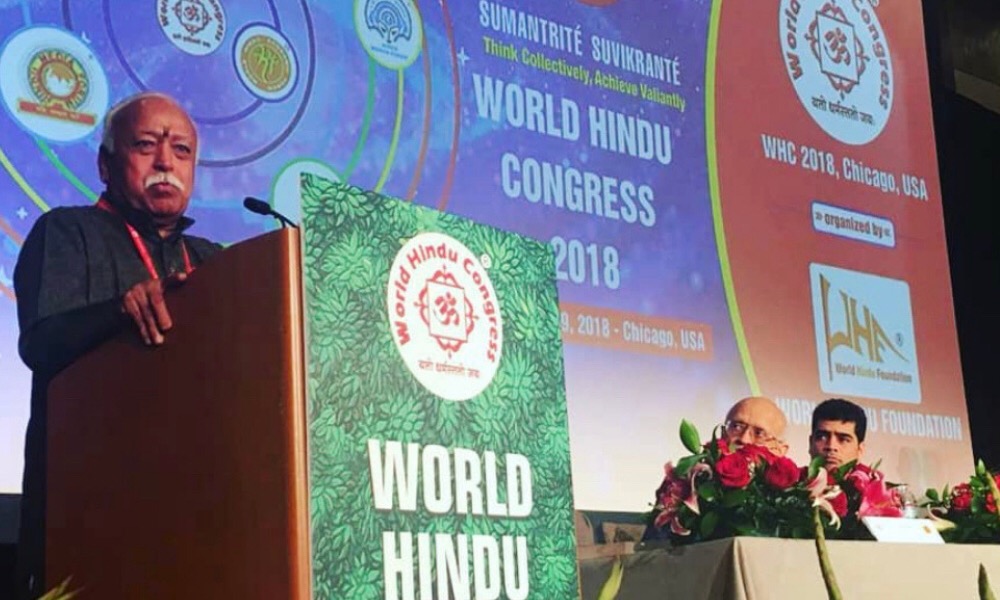 On September 7, six young people disrupted the World Hindu Congress conference in Chicago. The protest was a public stand against the rise and power of militant right-wing Hindu nationalist organizations like Rashtriya Swayamsevak Sangh (RSS) in what the protesters believe to be a Hindu-fascist Indian government.

The demonstration began when members of Chicago South Asians for Justice, appearing in two groups on opposite sides of the room, stood on chairs chanting and raising banners with anti-fascism messages as RSS leader Mohan Bhagwat was to answer questions from the audience. Conference attendees began aggressively pushing, shoving and grabbing at the protestors, knocking them off their chairs and yelling obscenities.

In an interview with The Telegraph, one protester said, “One man put his hands around his neck and started choking me.”

The members of the anti-facism group said, in a statement describing the attacks against them, that they decided to not publicize their names in an effort to protect themselves from harm.

“They called me a ‘dirty Muslim’ and threatened death,” another demonstrator recalled.

She also alleged that one individual, later arrested on charges of battery, spat in her face in front of police. This protester and one other Chicago SA for Justice participant were also arrested.

The ‘coalition’ fighting the “rise of global fascism” is made up of mostly female South Asian, caste-privileged Hindus, who state that they “follow the leadership” of Muslim, Dalit and other minority groups directly impacted by the reign of Hindu supremacy.

According to the group, the World Hindu Congress is organized by and celebrates militant Hindu nationalist organizations that advocate for violent Hindutva ideologies and for a pure Hindu nation, which puts Muslim, Dalit (formerly the “untouchable caste”), Sikh, Christian and other Indian minorities under brutal attack.

Since the rise of the Bharatiya Janata Party (the political party that operates on Hindutva ideology) in 2014, minority groups in India have been in more danger than ever before, with the number of mobs, lynchings, rapes and other attacks against these groups on a steady rise.

“Bengali Muslim immigrants in Assam and elsewhere face the constant threat of deportation,” reads a Chicago SA for Justice statement on the conference. “In states like Kerala, where there are high concentrations of religious minorities, the BJP government has neglected to provide aid in the face of natural disaster. An unprecedented number of South Asians are currently entering the United States through the Mexican border. The reach of Hindu nationalist persecution of religious and caste minorities reaches affected people Kashmiri, Rohingya, and Palestinian communities living under occupation.”

For the group, the violence that broke out as a result of what was meant to be a peaceful demonstration exposed the conference as not an innocent, faith-based Hindu convening, but a platform for Hindu nationalism:

“WHC masks itself as a non-violent moderate organization, simply interested in promoting Hindu values,” another Chicago South Asians for Justice statement reads. “WHC intentionally obscures its militant, religious fundamentalist principles and ties online, but during the conference, WHC speakers reiterated their disturbing political philosophy, which includes militarist and eugenist overtones and messages of intolerance. More than anything, their brutal actions in response to our peaceful dissent demonstrate how dangerous they truly are.”

Chicago SA for Justice also emphasizes in their messaging that leaders of organizations like the BJP and RSS depend on the financial support of Hindu South Asian living within the diaspora.

Chicago Alderman Ameya Pawar and IL state senator-elect Ram Villivalam, as progressive Hindus, both publicly condemned the World Hindu Congress and its militant nationalist intolerance. Despite pressure from Chicago residents not to attend, Congressman Raja Krishnamoorthi attended the conference and has not yet denounced the violence that protestors faced.

Chicago SA for Justice asserts that “the concurrent rise of white nationalism in the United States and Hindu nationalism in India are not coincidental but rather co-conspirators in the rise of global fascism,” an epidemic that must be met with resistance everywhere.