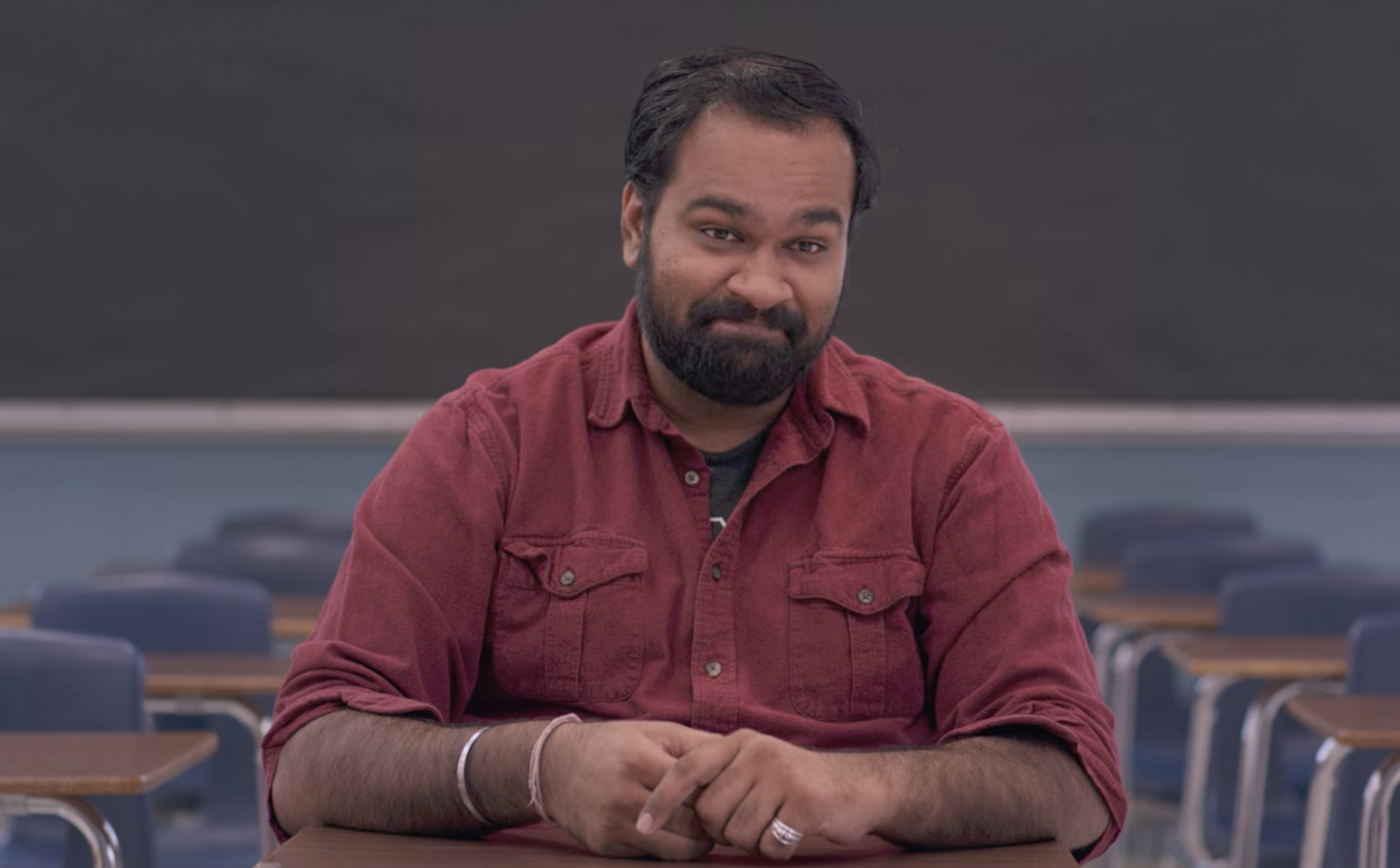 When “Sima Taparia from Mumbai” met Vyasar Ganesan, one of the singles featured on Netflix’s much discussed “Indian Matchmaking” docu-series, she was as smitten by his effortless charm as the rest of us. The 30-year-old college counselor from Austin, Texas, quickly became a fan and Twitter favourite, wooing singles across the globe with his welcoming personality and infectious smile.

And when Vyasar and a potential match broke up on the grounds of his earning potential, Sima wasn’t the only one visibly upset. The Twitterverse was just as disappointed, clearly at a loss for what went wrong.

Even though Indian Matchmaking has received its fair share of criticism for glorifying South Asia’s problematic rishta culture, it has opened the door for discussion regarding desi obsession with choosing partners based on superficial attributes.

It was another baking summer day when I metaphorically ‘picked up the phone’ to Vyasar Ganesan – the events of 2020 have all prompted us to learn the rules of email, Skype and Zoom conversations, along with other pieces of computer software.

There’s the initial mutual nervousness of an interview conducted by distance, but it soon fades as I excitedly jotted down answers my questions. I had to know: why subject oneself to the downsides of Netflix fame when a quiet life calls?

“I was working, and a friend in LA sent me the casting call for the show. I looked at it, and thought “Nah.” An hour later, in the middle of a work meeting, I got six other messages from six other people, saying I had to apply, I have to be on the show. So, I said, sure, ok, if it’ll get you off my back! A few months and several interviews later, I get a phone call from a producer, saying, alright, we’ll see you in March. It was a wild ride.”

Today, Vyasar Ganesan finds himself overwhelmed with fan mail, as well as thirsty singles sliding into his DMs. With “Indian Matchmaking” taking off like a storm, what effect has newfound fame had on his life?

“Now that the show’s been out for a few weeks, life has changed in many, many ways. I’ve been recognized a few times in public (the mask and the pandemic, obviously, put a damper on the public appearances) and my Twitter has blown all the way up. I’m trying to keep my ego in check, reminding myself that whatever celebrity I’ve gained, it’s not a feature film or even a YouTube series. It’s a docu-series that I was a participant in. Essentially, cool, but, you know, keep it chill.”

Taparia was confident Vyasar would find somebody through the show given his friendly nature. When describing an ideal partner, he primarily lists values and not physical characteristics. Was reality TV, then, really the surefire way to seek a partner?

“I had no idea. I was open to the notion, and I went into the process feeling hopeful and honestly searching. But there’s no guarantees with anything, even with a matchmaker as talented as Sima. But as I’ve said, if I met the love of my life because of a reality TV show, it would not be the weirdest thing that has ever happened to me.”

Sima Mami’s rishta seeking skills have turned her into a global phenomenon, making her the one person at the center of “Indian Matchmaking.” But how much of her clients’ specified criteria does she actually take into consideration while playing cupid?

“Sima really does try to treat you like her own child. She brings a lot of energy and positivity to the process, or at least she did with me. I had a hard time coming up with criteria on the spot — when she asked me what I was looking for, I’m fairly sure my mind went blank and I just said, “What is anyone really looking for?” But when I finally was able to articulate what I was looking for, I think she saw what I was saying and what I had left unsaid, and did her best to match me based on that. I didn’t feel that anything was ignored in either of the women she set me up with.”

Throughout the arranged dating process, Vyasar appeared to be forthcoming, expressive and genuinely candid. He doesn’t have a five-year plan, but definitely sees himself as a stay-at-home dad. Keeping the positive qualities in mind, one does wonder how much an eligible bachelor differs from his on-camera persona.

“I was definitely anxious to get time off camera with both Manisha and Rashi. I tried my hardest to be real on camera, but obviously there’s a difference between trying to be real and being real. In our brief exchanges off camera, we were really able to open up and talk about our wishes for the future, our long-term goals, dreams, hopes, fears, etc. Still, it was encouraging to see that both women really presented themselves honestly on camera.”

The show essentially divided viewers into two groups. One group cringed at the blatant display of colourism/racism, casteism or deeming female candidates as “too picky”. The other stuck with the show until the finish line because it hit a little too close to home. But regardless of your group preference, it’s clear there was an obvious disparity in the way men and women were treated on the show.

“I think it’s foolish to claim that gender makes no difference in the process. It’s obvious that Indian society places a higher value on the opinion of men that it does of women. Things are changing, slowly and painstakingly, and I think the show does serve, in various capacities, as a testament to that. We’re talking about these issues, and we’re conscious that we need to keep talking, not just among ourselves but amongst all people, across all generations. Still, I think the show works hard to celebrate the choices that all the participants made. It’s commonly seen that arranged marriages are made by hook or by crook, with an unfair degree of force and arm-twisting. I think “Indian Matchmaking” works hard to show that there’s room for celebrating the individual’s right to choose.”

In a fresh display of vulnerability, we also saw Vyasar being frank about his family’s history. His parents are divorced, and his father is serving a prison sentence on a murder conspiracy charge.

“To be honest, it wasn’t something I planned on doing. But the more I thought about it and talked about it during those interviews, wedged into that tiny little desk, I came to understand that it’s a part of my story. My father’s court case is a matter of public record – anyone can find it, and there have already been articles written about since the show came out. But I made the choice to stake my claim on that part of my story, rather than let someone else. It wasn’t easy, and the audience can tell how uncomfortable it was for me, with Sima and with my friends, certainly. But it was the right thing to do. People have been reaching out from across the world, expressing appreciation and gratitude that I was able to open up about my father and my history. Many have said it inspired them to just open up to one or two people about their own issues. And that’s powerful, to feel my story’s impact.”

“Indian Matchmaking” also introduces us to downright amazing and badass females. Vyasar was matched with two of them! If given the choice, who else would he like to date from the show?

“I’d love to go on a date with Nadia. I’m a big fan of Guyana, especially the food and the history. More than that, I think we have a lot in common and have a similar sense of humor. It would be a lot of fun, certainly. We both like a non-traditional date and plenty to eat.”

Things really did seem to work with Rashi until Vyasar picked up the phone to tell her about his father’s history. It really left us viewers on a cliffhanger!

“Rashi and I aren’t seeing each other anymore. Things didn’t work out, but not because of what I told her about my family history and my father. Rashi made it clear it didn’t bother her. It’s a funny thing, how hard dating is. Even when the big things are aligned, the little things can trip up a relationship, and just as often the opposite is true. There’s no predicting it. I still count her as a good friend, and I feel lucky that I got to spend the time I did with her.”

Surely with all the criticism that Indian Matchmaking has received – good and bad – it must be renewed for a second season to redeem itself? I asked Vyasar: was there any chance of Netflix bringing back its OGs?

“I hope so! I hope people keep watching it and keep talking about it. Netflix, take notes.”

With all the conversations, critiques, commentary and chatter taking place across the globe, there was bound to be a specific thing or two that’s got to really stuck.

“I’ve been amazed how quickly people seem to recognize this show is different. “Indian Matchmaking” has very, very little in common with other romance shows on Netflix, Hulu or really anywhere. It’s shot differently, edited differently, and has characters so wildly different than what anyone would expect to see. Part of the reason it’s done so well is because of that – no one expected to see or talk about the things that the show makes us talk about.”

“Indian Matchmaking” has slowly become a viral sensation thanks to fans who have made memes based on the docu-series. People took no time in flooding our feeds with relatable and hilarious moments extracted from the show!

“There are some really quality meme-makers out there. People playing around with concepts of height, face-reading, even my Goldilocks analogy has been fair game. I love a good meme, and being on this show has been a goldmine of memes, usable for a wide variety of circumstances. I love that my friends keep finding new ones and sending them to me, it’s great. Plus, it speaks to the enduring nature of the show – it can be a serious thing, matchmaking, but the comedy cannot, will not be denied.”

“Indian Matchmaking” (and the story of Vyasar Ganesan) is streaming on Netflix globally now. We cross our fingers the show is renewed for a second season and our favourite bachelor gets more screen time and more chances at love!