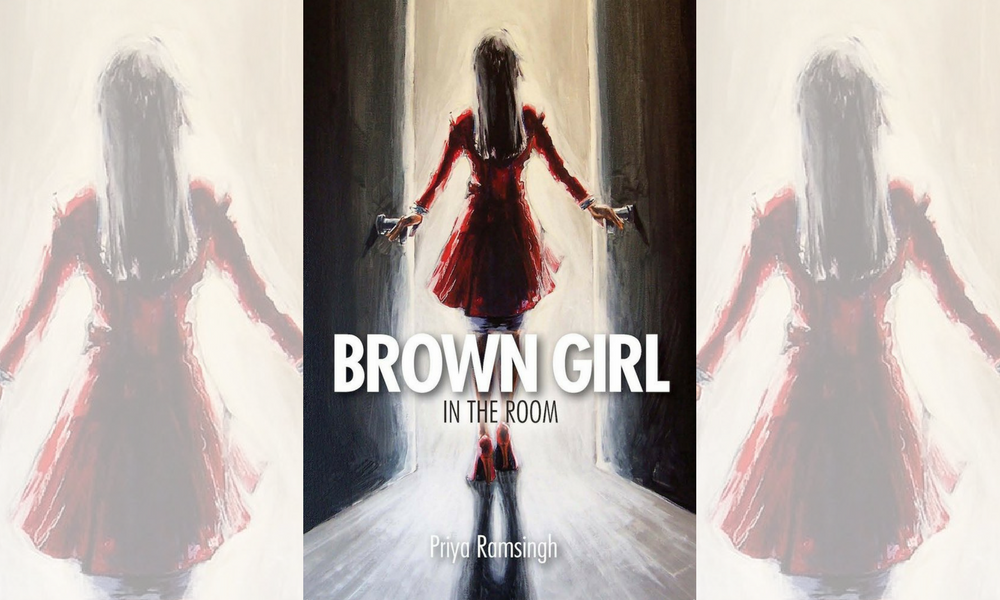 Instead of one typical book review, Brown Girl Magazine presents two opinions on Priya Ramsingh’s “Brown Girl in the Room,” BG’s Amrita Kumar-Ratta and Harsha Nahata share their opinions on the workplace novel and their reactions to what it feels like to really be the only brown girl in the room.

A Book that Speaks Truth to the Power of Institutional Inequity

The title “Brown Girl in the Room” is reason enough to make this book worth reading.There is a power in these five words, written in all capital letters, that sparks curiosity.

The novel’s mysterious premise, about a young brown woman beginning her professional journey in the cosmopolitan Greater Toronto Area’s non-profit sector, drew me to this particular read. And oh, what a journey it was.

Priya Ramsingh’s first novel may not be the book you gravitate towards when you want to clear your head and it’s certainly not the book you reach for when you want to escape from reality or travel back in time. Rather, it is an important story that reflects a number of timely questions: Why is fostering a culture of inclusion crucial in today’s diverse society? What happens when diversity, equity and inclusion are not taken seriously by organizations? What are really the implications of a toxic organizational culture?

The question that Ramsingh is perhaps most concerned with is, what is it like to be a brown girl trying to climb the professional ladder in a culture that wishes to tokenize her and seeks to hold her back from achieving her full potential?

In exploring these queries, “Brown Girl in the Room” becomes a bleak tale about non-profit organizational failings vis-à-vis diversity, equity and inclusion. While it reads, at times, more like a grim organizational case study than a novel, it is a crucial addition to Canadian diasporic literature.

In fact, I have never felt my own professional experience so fully represented in the pages of any other book. Maybe it is because I am a diversity, equity and inclusion professional, or because I have worked in the non-profit sector for a decade or because I live and work in the Greater Toronto Area, where this book takes place. Of course, it is also because I am a brown woman. Whatever it is, this particular book hits terrifyingly close to home.

In fact, all of the characters in the book are multi-layered, reflecting the numerous realities that end up butting heads in the fictional non-profit that Ramsingh has created, Albatross Community Services Inc.

There is Anna, a child of Polish immigrants who yearns to become a manager and decries the organization’s diversity efforts as she struggles to move up the corporate ladder. Venah, an older South Asian woman who is assertive about being recognized as the team’s diversity expert, struggles with professional growth in an environment that deems her irrelevant. Sara, the book’s protagonist, a young Indo-Caribbean woman who is a rising star in her field. Even though she is only hired to meet the organization’s diversity requirements, she becomes the subject of a series of micro-aggressions and is ultimately forced to choose between ‘making it’ and saving herself.

Along with the other characters in the novel who are also crafted in a refreshingly holistic way, Ramsingh uses Anna, Venah and Sara as vehicles for commentary on the distribution of success and power in the workforce, the importance of leadership in the creation of an inclusive organizational culture and the complexities of the journey towards equity and inclusion.

Directness of Language and Plot

Rather than play make-believe around the topic of equity and inclusion in the workplace, Ramsingh creates her fictional world based on the varied experiences she has had in reality, as she notes in her dedication, the result is a plot that unfolds in a very direct, no-bullshit manner.

This isn’t the kind of fictional writing that is filled with symbolism and poetry, but rather one that draws from the directness and linear chronology of life itself. From the events that unfold at work to the various public and private relationship dynamics that are explained and developed and the very mundane routines that are described, the story is a reflection of the unfolding of everyday life. This method of storytelling around such an important topic is at once effective and drab, and it creates a sense of immediacy around the larger conversation of social inclusion.

Ramsingh has cleverly and strategically inserted some great moments and dialogues that capture intergenerational and intercultural subtleties that are often overlooked by mainstream diversity and inclusion advocates.

From the beginning of their interactions in the novel, when Venah asks Sara what her real name is and proceeds to comment consistently on the young woman’s lack of cultural knowledge, Ramsingh has poignantly showcased a real intercultural tension that is exacerbated by both an aging population and by a non-profit sector that is predominately middle-aged and white.

This tension is also illustrated in her development of two other characters, Mara and Maxine. Mara, the queer Jewish executive director of Albatross Community Services, exhibits an ‘eat or be eaten’ attitude through her leadership style. Though she is envious of Sara’s attractiveness and professional competency, she wants Sara to experience the hardships of climbing the professional ladder, and so, deliberately works to smash her confidence.

In contrast, Maxine, a middle-aged black woman with Caribbean roots and natural hair, is a confident female leader of color who is isolated from the others at work for her progressive opinions. However, she has played the game long enough to know when and how to insert herself into the conversation. She mentors Sara but ultimately cannot stop the corporate wheels from spinning in Mara’s favor.

These complex and nuanced intergenerational and intercultural references add to the authenticity that seems to prevail throughout “Brown Girl in the Room.”

While the diversity and inclusion subject matter is certainly trending, the timing of this novel couldn’t be more perfect, especially set in the Toronto, Canada area. With growing social and political movements in support of decent work, pay equity and diversity in leadership, as well as increased calls for non-profit organizations to improve policies, practices and behaviours on indicators of diversity, equity, and inclusion, this book is an important read with critical implications for how individuals could and should respond to organizations that are not engaging in self-reflexive practices.

In an era where representation matters, “Brown Girl in the Room,” is definitely the first novel I have read that has connected so deeply to my own reality.

Moreover, I am sure it is one of the first that offers such a candid reflection of how inequitable environments are created and maintained and how these environments adversely affect brown people – and especially brown women – in the room.

Seeing Myself Reflected in Ramsingh’s Novel

From the first pages of this novel, I knew it would be a story I could see myself in. The book opens with protagonist Sara Ramnarine building up the courage to confront her coworkers in a public space for harms endured during her time in a PR and Communications position at a nonprofit, a non-profit serving the elderly in the Greater Toronto area.

We flashback two years earlier and learn about Sara’s journey navigating corporate dynamics in the face of subtle microaggressions. Hired as part of an initiative to increase diversity in the PR staff, she is, in fact, at the time of her hire, the only brown girl in the room.

What struck me most about this debut novel by author Priya Ramsingh is the number of times I found my own experiences mirrored in the work. From leadership wary of newcomers moving up the ranks too fast to coworkers who scoff at the idea of a diversity and inclusion hire, the story captures the essence of what it means to be a minority in a predominantly white corporate environment. Especially in today’s world.

Throughout the novel, readers are let into the minds of many different characters. The level of detail and time spent developing each character’s thought process sets this book apart from the rest. While centered on Sara’s perspective, we enter the minds of all of her coworkers to see the competing power dynamics they balance.

[Read Related: ‘Trust No Aunty’: The Comic Irony of Surviving as Desi Millennials]

Sara finds herself cornered, unable to seek support from anyone on her immediate team.  She picks up on the latent distance between her and her coworkers and is constantly on edge to prove herself.

In front of Venah, she is challenged for not being “Indian” enough, as Venah assumes Sara is hiding her heritage. Like the others, she doesn’t seem to understand that Sara is truly Caribbean, not South Asian. The way Ramsingh highlights this nuance does a great deal to show us that not all people of color, and especially not all brown folk, can be painted with the same brush stroke.

Throughout her two years in the department, Sara endures a gamut of microaggressions — from comments about her inability to speak Hindi, to a joke about her wearing a saree to work events. Sara is given a growing workload as she does much of the work for very little recognition. Whether it is writing speeches for others or being asked to constantly carry more than a fair share of work, I noticed myself able to relate to Sara.

We are able to see how easy it is for senior leadership to hide behind corporate policies and processes, not held accountable for unfair promotion, timeliness or assigning overwhelming workloads. On the surface, these look like little issues not to make noise about, but as these instances begin to stack on top of each other, the toll weighs Sara down.

It is refreshing to see the time Ramsingh spends building out what exactly that toll looks like. Sara’s dark mindset – or “sticky gum,” as she calls it– can be recognized as the result of having to continually face these subtle instances of racism. By taking time to describe the anxiety, the constant second-guessing the stress from always being under fire and the physical and mental exhaustion, Ramsingh’s novel brings to life what it means to endure a work environment that is high stress, at best, and toxic, at worst.

I hope that, for many, this story will serve as a point of affirmation, as it allows us to understand that these are common reactions to a work environment in which one feels ignored and underappreciated. While I wish her coworkers recognized the impact their actions had on Sara, seeing her grapple with the mental, emotional and physical effects of microaggressions reiterates that these, in fact, are serious experiences, and there is still much work to be done.

“Brown Girl in the Room” gives me hope that there is an opportunity to start understanding, processing and discussing these experiences within our community.