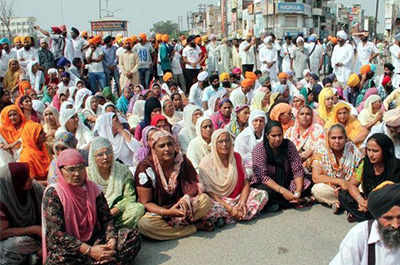 Sikhs around the world have reached an effective roundabout, where the decisions we make now are fundamental to ensure the cohesion and vision of the future of our community. I say roundabout to highlight the complexity of what we are facing.

We are being attacked here, in America, in the form of regular racial profiling and hate crimes perpetrated against our community. Most recently in the case of Inderjit Singh Mukkher, a Sikh man who was brutally assaulted on his way to a grocery store in Chicago.

However, we are also being targeted in our “homeland,” now more than ever, where in the last two weeks, two peaceful Sikh protesters were murdered at the hands of the Punjab police for speaking out against the desecration of our sacred scripture, the Guru Granth Sahib.

What began in Punjab as a simple protest against the religious faction that publicly desecrated the Sikh scripture has evolved into a gradual dismantling of the political, structural, and institutional core of the Sikh faith. We are being attacked where it hurts most: the heartbeat of the Sikh nation.

While this story is painfully harrowing, for Sikhs across the world the events of this week feel eerily familiar. The government’s decision to rely on military force, along with its enactment of media censorship, reminds Sikhs of the dark days of 1984. During this period about thirty years ago, the government created these precise conditions as part of its setup for a military assault that claimed tens of thousands of lives at Darbar Sahib, the most significant place of gathering for the Sikh community.

What I realized this past week is that, I, as a child of immigrant parents, and as a member of a larger Sikh diaspora, have the privilege to not care. This is a privilege that surpasses class, education level, and all other sorts of classifications. We have the ability to read articles and see bloody images of our brothers and sisters struggling and simply choose to close the tab. It’s a powerful realization with potentially course-changing consequences.

That being said, I’m proud to say that my community has shown incredible optimism in light of this rather debilitating political climate. Every time a new piece of information is revealed about the current political climate of Punjab, we add another piece to the puzzle of our destiny.

Our response, from what I’ve been observing, is consistent with activism and utilizing the agency that we have as people who are geographically, but by no means emotionally, removed from our homeland. I’ve seen teach-ins being held throughout colleges in California, and I’m sure others throughout the United States. My own alma mater, UCLA, held a protest last Thursday, to highlight the desecration of our holy scripture in Punjab, and subsequent protests that were stopped harshly and with the use of water cannons, tear gas, and gunfire, that left at least two dead and more than 150 injured.

Gurdwaras (Sikh temples) throughout the nation have held Sarbat Khalsa forums or methods of deliberation that involves a sizeable group of Sikhs together in efforts of reaching  desired resolutions to a problem. Some common resolutions include boycotting and calling for the resignation of key players who are complicit in the killings of Sikhs in Punjab as well working toward creating a universally accepted organizational structure for Sikhs.

There a just a few observations I’ve made as we, as a community, continue to actively respond to and educate others about Punjab. Foster a deep respect for other movements and tread carefully. There have been numerous mentions of the #SikhLivesMatter hashtag which, whether you realize it or not, completely undermines and takes away from the Black Lives Matter movement that has worked incredibly hard and long to garner support and recognition on a national scale.

Secondly, do not sensationalize the events that are occurring in Punjab. It is not our place to determine just how brutal the events are, nor should we be making strong comparisons to other instances where Sikhs were selectively targeted en masse without providing specific contextualization and support. Who knows what Punjab needs more than people who are being directly affected by the government’s regime? All religious minorities in India are struggling in different ways, so if we want to speak out, we should be critical and recognize the nuances that exist within the state, particularly that there is a trend toward one religious denomination benefitting from the oppression of many others. In essence, Sikhs are not the only religious minority in India struggling under the leadership of a Hindu national state.

Lastly, at the very core of activism is love. To forget that truth is to undermine years of protest, actions, and speaking out for the right reasons. This is the kind of love that is both inclusive and intentional. It is easy to get angry when certain groups of people perpetuate instances of hate and ignorance on a seemingly regular basis. It not only puts the burden on the community affected to create a curriculum of sorts for others to try to understand your daily experiences, but it leaves the door open for anger and remorse.

Remember that everybody has a place in this movement. It takes the activists, the fighters, the social media fiends, the people on the loudspeakers and those with the pen to truly make a statement. It takes the artists and those who identify more with the Punjabi culture than the Sikh religion to transform ripples into waves. It takes communities to understand our oppression and stand in solidarity with our community to fight back. It is less a matter of if, but when we decide to rise up.

Manjot Singh recently graduated from the University of California, Los Angeles, but is only mentioning this because other biographies mention educational backgrounds. He is passionate about issues related to identity, politics, race relations, and social justice. He aspires to be a lawyer one day and hopes to keep his heart intact. He enjoys wearing different patterned socks and kurtas, and is working intently on becoming a better listener.