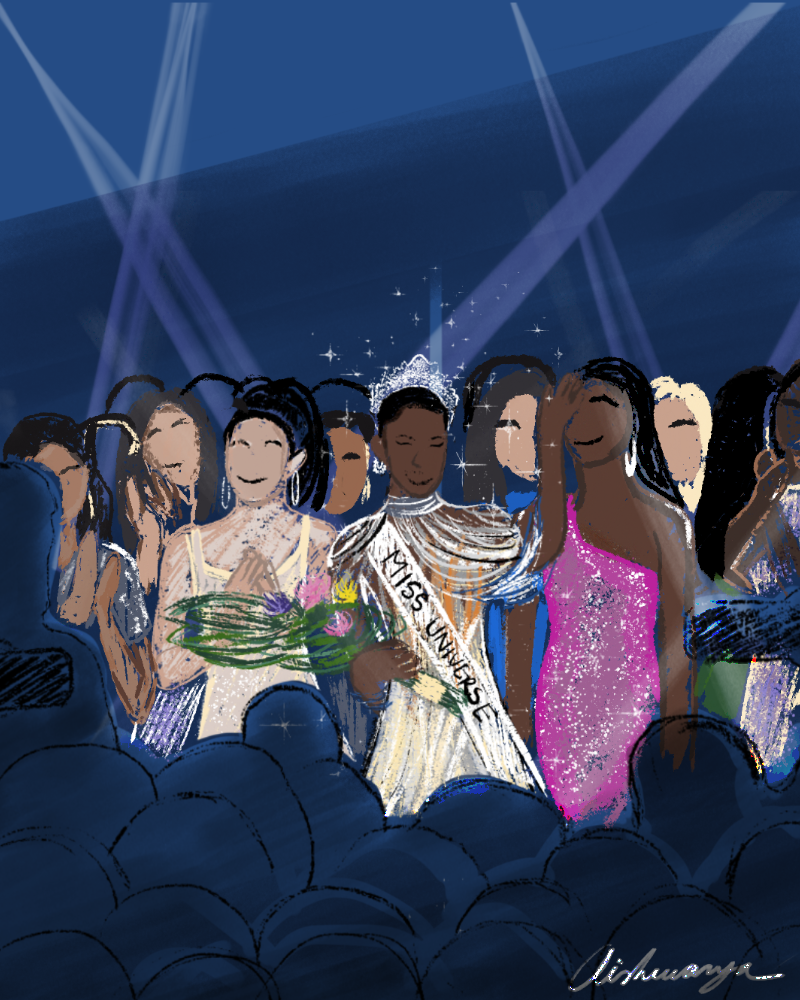 On Dec. 8, Zozibini Tunzi of South Africa took the crown as Miss Universe 2019. According to her contestant biography, Tunzi, who is 26 years old, is an “activist engaged in the fight against gender-based violence.” She is also a “proud advocate for natural beauty and encourages women to love themselves the way they are.”

“I grew up in a world where a woman who looks like me — with my kind of skin and my kind of hair — was never considered to be beautiful,” Tunzi said. “I think it is time that stops.”

As a brown-skinned, extremely curly-haired woman born in the Bronx to Guyanese parents, Tunzi’s words — and her win — feel particularly significant for me.

My hair and my skin color have often been the bane of my existence. “Stay out of the sun. You guh get dark.” As a child, I sometimes thought to myself: Why do I have to stay out of the sun when my friends are bragging about laying on the beach getting a tan?

The notion that fair is lovely and dark is ugly wasn’t just etched into my psyche, but seemed to be a South Asian and Indo-Caribbean cultural decree. Whoever was the “fairest one of all,” was automatically the most beautiful of all.

My mom, who has a light complexion, was said to be the prettiest girl in her village in Guyana. How could I ever live up to that? I heard some Indo-Caribbean women were bleaching their skin, but that was taking it a little too far for me. Instead, as a teenager, I tried to find makeup that made my skin look slightly lighter.

Onto The Hair Issue

Caribbeans take enormous pride in ensuring that their children show up to school neatly dressed, which means iron-pressed clothes, and, for most girls, braided hair. I attended P.S. 63, a public elementary school in Ozone Park, Queens, New York, where a Uniform was not required. Nevertheless, my parents made me wear traditional jumpsuits and oxford shirts bought from Cookies Department Store on Jamaica Avenue. In the morning, my grandmother religiously oiled my curly hair before braiding it, often with my choice of ribbon weaved within.

One day during recess, my classmates and I were playing outside in the schoolyard, and I decided to do something bold. Wanting to embrace my hair, I undid my braid and let my curls out to blow in the wind. I got a little too close to the fence, and as my luck would have it, my hair got stuck in the wire mesh. One of my classmates conveniently had a pair of safety scissors on hand and we just chopped off the chunk of curls that were stuck. “Stupid hair!” I thought. “This is what you get for trying to go natural and free.”

In the fifth grade, my family and I moved to South Ozone Park, and I transferred to Our Lady of Grace, where a uniform was a requirement so I no longer felt outcasted by my clothes. However, my new classmates found another part of my appearance to tease me about, my hair. I was branded “Medusa,” because of my stubborn curls that would protrude out of my head no matter how much product I put in them.

Being compared to a female monster with snakes on her head didn’t sit well with me. As a result of this teasing, sometimes I would come home and stifle quiet cries in my room.

After that, I didn’t let my hair out for years. In high school, my daily style was a tightly braided bun, with a scrunchie made of straight black hair tied around the bun (the kind you could find at the dollar store). This gave the illusion that I had straight hair. Anytime I did let my hair out, it felt like a mistake.

And, despite knowing that both my parents were 100 percent Indian, family members sometimes called me “dougla,” a Bhojpuri slur meaning “bastard” used to describe someone of both African and Indian descent. They’d pass it off affectionately, but there were always undertones of racial discrimination stemming from colonial times. I hated that anti-blackness with a passion and would often retort with “So? What’s wrong with being black?”

Growing up, my family enjoyed watching pageants on television. I was unapologetic about my views that this was a waste of our time. I’d ask if we could switch the channel, then try to force myself to be interested when my opinion was outnumbered. The only part of the pageants I remotely enjoyed was the question and answer segments because I felt it gave contestants the opportunity to compete based on values instead of looks. I will admit that, in large part, I disliked pageants because I couldn’t see someone like myself, someone with brown skin and curly hair ever making the cut.

With Tunzi’s win and many other black and brown women emerging as front-runners in the pageant world, I’m feeling a sense of hopefulness. I wish Aminta the child had felt this, but I am thankful that young girls today have that chance.

“Society has been programmed for a very long time that never saw beauty in a way that was black girl magic,” Tunzi said during the Miss Universe competition. “But now we are slowing moving to a time where women like myself can finally find a place in society, can finally know they’re beautiful.”

All those years of bullying and teasing on the basis of my skin and the texture of my hair are now being replaced with affirmations that women who look like me are beautiful. No photo filter necessary!